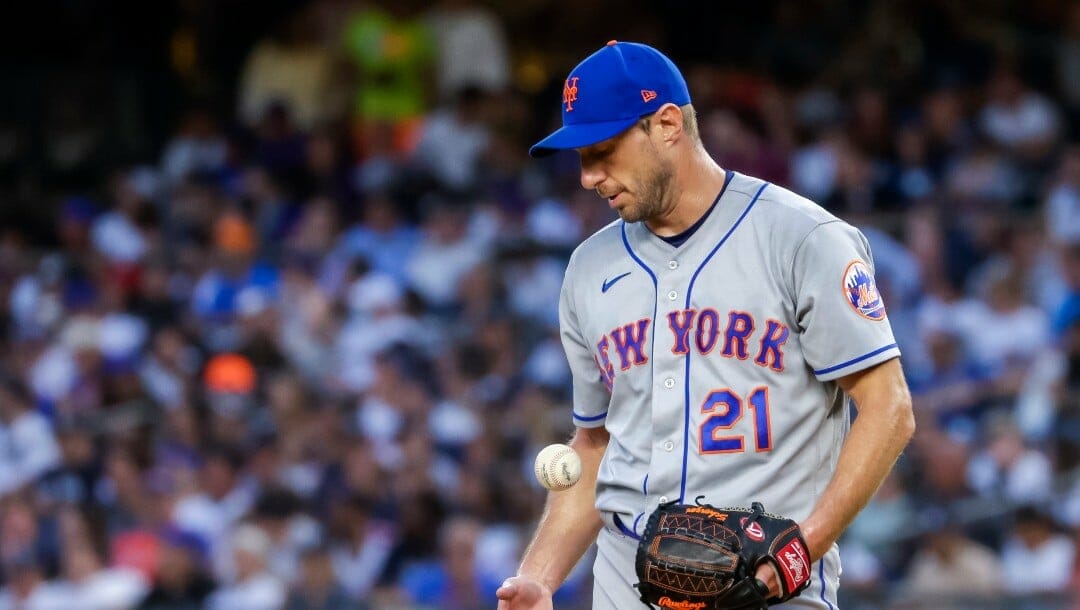 Of the seven highest-paid MLB players for 2022, only one plays in the National League. That one player, however, is the highest-paid player in MLB history and the first player ever who signed a contract with an average annual value north of $40 million.

As teams balance their checkbooks with hopes of climbing World Series odds, here are the highest-paid MLB players for 2022:

At 37 years old, Max Scherzer landed a $130-million contract with an average annual salary of $43.3 million.

Scherzer’s deal nearly pushed the New York Mets ahead of the Dodgers for highest MLB payroll in 2022.

Gerrit Cole is only three years into his nine-year, $324 million contract with the New York Yankees. He also has a full no-trade clause and opt-out available after 2024.

Anthony Rendon has been an injury-ridden flop in Anaheim since signing a seven-year, $245-million contract before the 2020 season. And, after 2022, he still has four years and more than $150 million remaining on the deal.

Now with eight Silver Sluggers – and one AL MVP – Trout is making $35.5 million per season.

There’s only one guaranteed year remaining on Miguel Cabrera’s eight-year, $248-million contract extension the former Triple Crown winner signed in 2015. There are two mutual option years – 2024 and 2025 – with $30-million base salaries.

He’s made at least $10 million annually since his arrival in Detroit in 2008.

Nearly all of Manny Machado’s payroll salary throughout his 10-year, $300-million deal is base salary. His $20-million signing bonus is evenly spread through the 10 years (2019-28), $2 million per season.

In sending Nolan Arenado to the St. Louis Cardinals before the 2021 season, the Colorado Rockies also sent the third baseman’s eight-year, $260-million contract with an average annual salary of $32.5 million.

In early July, he became the first Cardinals’ player to hit for the cycle since 2005.

The oldest outfielder with a top-10 MLB salary in 2022, 32-year-old George Springer is making $28 million in his second season with the Toronto Blue Jays. He has four more seasons remaining on a six-year, $150-million deal.

Francisco Lindor signed a 10-year, $341-million extension three months after arriving in New York from Cleveland. His yearly cash is exactly $27 million over the course of the deal that runs through 2031.

Goldschmidt has led the Cardinals to one of MLB’s best ATS records.

If Bryce Harper plays out his entire 13-year, $330-million contract in Philadelphia, the former No. 1 overall pick will have approximately $366 million in career earnings through the 2031 season.

Zack Wheeler is the second-highest-paid NL pitcher with a cash number of $26 million in 2022.

His five-year, $118-million contract, signed in early December 2019 after five seasons in New York, runs through the 2024 season.

Marcus Semien’s sensational 2021 season led to a seven-year, $175-million deal with the Texas Rangers in free agency. He’s now signed through the 2028 season, after which he’ll have more than $200 million in career earnings.

Entering the final weeks of his first season in Texas, Semien ranks among the MLB stolen base leaders.

Justin Verlander signed a two-year, $50-million deal before the 2022 season that included a player option for 2023 if the future first-ballot Hall of Famer pitched 130 innings in 2022, which he easily did.

Playing for his third different team in four seasons, Marcus Stroman has a $25-million cash number for 2022. His three-year, $71-million contract with the Chicago Cubs – signed in December 2021 – includes a player opt-out after the 2023 season.

One year into a bizarre seven-year contract, Kris Bryant is still owed more than $150 million from the Colorado Rockies through the 2028 season, at which time the injury-riddled Bryant will be 36 years old.