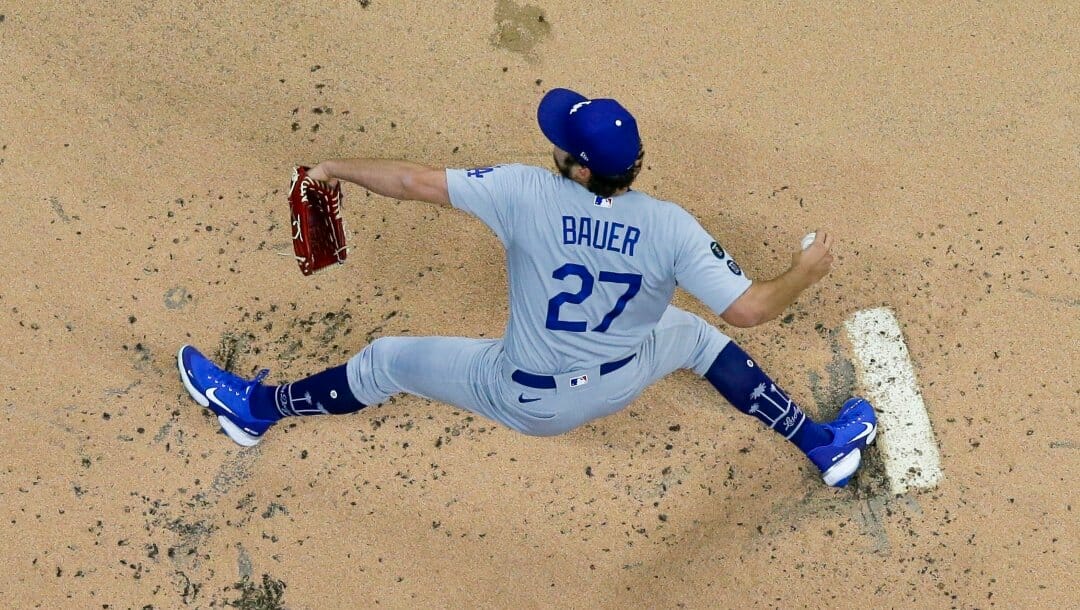 Sometimes, silence speaks volumes — and if the Los Angeles Dodgers don’t make a statement on Trevor Bauer soon, their silence raises a lot of new questions.

On Thursday, Dec. 22, Major League Baseball announced that an independent arbitrator reduced Bauer’s 324-game suspension to 194 games, thereby making him eligible to return to baseball immediately. With one year left on his three-year contract with Los Angeles, this puts the team in a precarious position.

Should the Dodgers reinstate the 31-year-old pitcher to their roster, or should they officially cut ties and release him to free agency?

Dodgers’ statement on today’s ruling: “We have just been informed of the arbitrator’s ruling and will comment as soon as practical.”

The Pasadena Police Department confirmed on June 30, 2021, that a woman in San Diego had accused Bauer of two separate instances of physical and sexual assault. She alleged Bauer sodomized her without her consent, punched her in the face, and choked her to the point of unconsciousness.

She had been granted a temporary domestic violence restraining order against him on June 28.

In the woman’s claim, her attorneys said Bauer spoke about the incident in a call taped by police and “did not dispute that he had punched [the woman] and that doing so resulted in black eyes.”

The woman also went to the emergency room at Alvarado Hospital after the alleged assault, where she was reportedly diagnosed with an “acute head injury” and “assault by manual strangulation.”

While Bauer has acknowledged having sexual contact with his accuser, he has maintained their encounters were consensual. MLB placed Bauer on administrative leave on July 2, 2021, while an internal investigation was conducted into the allegations against him, and the leave was eventually extended through the remainder of the 2021 season.

On Aug. 20, 2021, the temporary restraining order against Bauer was removed after a judge determined Bauer didn’t pose a threat to the woman’s immediate safety. On Feb. 8, 2022, the Los Angeles County District Attorney’s Office announced they wouldn’t file criminal charges against Bauer due to a lack of evidence.

But Bauer’s reckonings didn’t end there, and the skeletons in his closet just kept coming out.

On Aug. 14, 2021, The Washington Post reported that a different woman in Ohio had sought a temporary order of protection against Bauer in June 2020. Police reports were uncovered indicating the woman accused Bauer of physical assault in 2017 and sought the order of protection after the pitcher sent her death threats.

Bauer denied these additional allegations and claimed he was the real victim, stating the Ohio woman was actually the one who harassed and physically assaulted him.

A third woman came forward in April 2022, claiming she had a relationship with Bauer during his time with the Cleveland Indians (now Guardians). She stated the pitcher choked her until she was unconscious, slapped her without her consent, and anally penetrated her while she was unconscious.

Once again, Bauer denied the allegations.

While the full details of MLB’s nine-month investigation have never been made public, Commissioner Rob Manfred announced on Apr. 29, 2022, that Bauer would be suspended for 324 games without pay for a violation of the league’s Joint Domestic Violence, Sexual Assault and Child Abuse Policy.

In the strongest possible terms, I deny committing any violation of the league’s domestic violence & sexual assault policy. I am appealing this action and expect to prevail. As we have throughout this process, my representatives & I respect the confidentiality of the proceedings.

This was the longest non-lifetime suspension issued in league history, and Bauer’s appeal made him the first player to ever contest a suspension under the league’s domestic violence policy since it went into effect in 2015.

On Sept. 13, 2022, Bauer released a video through his attorney, purportedly recorded by his first accuser the morning after the alleged assault took place. Bauer’s attorney claims the nine-second video proves his innocence, as it appears to show his accuser “willingly in bed with a sleeping Mr. Bauer… smirking and uninjured.”

The video doesn’t include sound.

Bauer’s appeal finally went to a neutral arbitrator on Dec. 22, where his suspension was reduced to 194 games, reinstating him immediately.

To be clear, this decision in no way vindicated Bauer. In fact, the arbitrator affirmed that Bauer did indeed violate the league’s Joint Domestic Violence, Sexual Assault and Child Abuse Policy, and did indeed deserve to be suspended.

The 194-game suspension is still the longest-ever active player suspension for sexual assault or domestic violence. Despite his reinstatement, he received a loss of pay covering the 144 games he was suspended during the 2022 season and was docked his salary for the first 50 games of the 2023 season.

BREAKING: An independent arbitrator reduced pitcher Trevor Bauer’s suspension from 324 to 194 games. He has been reinstated immediately. Bauer was docked of his salary for the entire 2022 season, as well as 50 games in 2023 (March 30 to May 23).

Statement from MLB is attached. pic.twitter.com/yIp14hCf7Y

This means Bauer still has one year left of his deal.

Even with the 50 games of docked pay, the Dodgers are on the hook for $22.5 million in 2023, regardless of whether they reinstate or release him.

What Should the Dodgers Do?

The Dodgers have until Jan. 6, 2023, to make a decision on Bauer. That’s two whole weeks from the arbitration to announce something for which they arguably should’ve already planned.

In my opinion, this isn’t a hard call to make. The Dodgers must cut ties with Bauer, and they shouldn’t need 14 days to figure that out.

Even before the sexual misconduct allegations, there were few more controversial figures in baseball than Bauer. From multiple accusations of online harassment, to the public posting of racist conspiracy theories about President Obama on Twitter, to a seeming inability to get along with teammates, Bauer’s problematic behavior follows him.

At the time, outfielder Mookie Betts told the Los Angeles Times, “He is who he is. You know what you’re getting and so I don’t really worry about it. It doesn’t bother me.”

I wonder if Betts is bothered now.

Regardless, if the Dodgers want to reinstate Bauer and put him on the mound every five days as a representative of their organization, that’s their call. And perhaps it’s naive of me to expect moral integrity from a multibillion-dollar baseball team.

Still, if that’s the decision they arrive at, I, for one, would love a lengthy explanation, because what exactly are the Dodgers’ values and principles? And how much are they worth?

I’d argue that Trevor Bauer isn’t worth 1,300 words of discussion, but here I am giving them to him.

I’d even argue that Trevor Bauer isn’t worth another second of our attention.

I really shouldn’t have to argue against Trevor Bauer’s MLB future, but the Dodgers’ silence must be greeted with loud resistance.