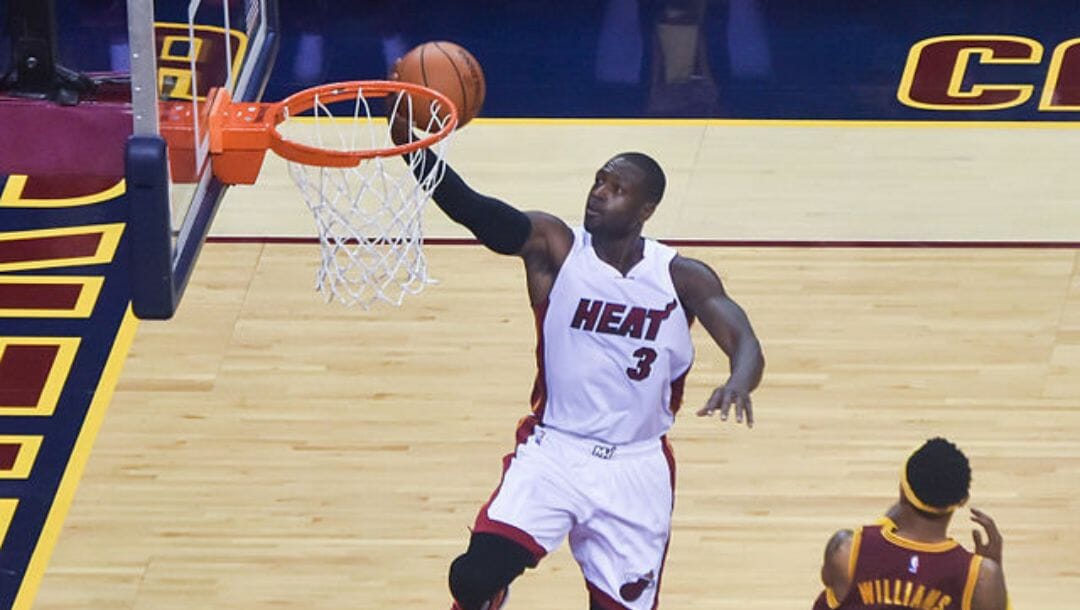 Miami Heat’s winning culture has made them a regular top-tier team in the NBA. This has placed them nicely in the NBA odds as one of the top contenders. With a roster built around superb talent, the franchise is also a household name in the NBA Finals odds conversation of a team who could bring home the Larry O’Brien Championship Trophy.

Spearheaded by the brilliant leadership of the front office, the franchise has won three NBA titles since it joined the league in 1988. They captured the championship in 2006 and a back-to-back campaign in 2012 and 2013.

But all of this success from the historied franchise was forged by great players who set the blueprint for them to use. These players were responsible for putting the South Beach team on the map of NBA contenders. We listed down the top five greatest Miami Heat players of all time.

Dwayne Wade is arguably the greatest Miami Heat player of all time. Drafted by the franchise as the fifth overall pick in 2003, the former Marquette standout left his mark on the organization with a pile of accolades. Wade was able to help the Heat capture three NBA titles in 2006 (Finals MVP), 2012 and 2013, as he averaged 22.7 points, 5.6 assists and 4.7 rebounds for 14 seasons with the team.

One of the best centers who donned a Miami Heat jersey is Alonzo Mourning, who was acquired by the team in 1995 via trade with Charlotte. Since then, Mourning became a bona fide superstar as he was the team’s leading man inside the paint. This blockbuster trade has helped the Heat reach the playoffs for six straight seasons, including an Eastern Conference stint in 1997.

Mourning won back-to-back defensive player of the year awards in 1999 and 2000, thus making the NBA All-Star team on six occasions during his Miami run. The 6-foot-10 center claimed the most blocks in franchise history with 1,625 and an average of 2.7 per game, which also leads the team history. Ultimately, Zo was an integral part of Miami’s first-ever title win in 2006.

Although he only played for four seasons with the team, LeBron James did leave his mark on the franchise by delivering two NBA titles in 2012 and 2013. It all began when James decided to take his talents to South Beach and team up with Dwayne Wade and Chris Bosh in 2010. The trio looked unstoppable as they bulldozed themselves to four straight NBA Finals stints.

James led the team in scoring for all four years and averaged 26.9 points, 7.6 rebounds and 6.7 assists in 294 games. Before coming back home to Cleveland in 2015, King James set the franchise record in points per game average with 26.9 points, player efficiency (29.6) and minutes per game (38) to cement his place as one of the team’s greatest players.

The third member of Miami’s ‘’Heatles’’ was Chris Bosh, who terrorized the opposing team’s big man with his defensive tenacity and unique offensive arsenal. Bosh suited up for Miami in six seasons, and if not for a blood clot in his chest, he could have two or three more seasons with them. He was also an important piece to the team’s dominant run from 2011 to 2014, which delivered two championships in four tries.

As a member of Miami, the 6-foot-11 power forward averaged 18.0 points, 7.3 rebounds and 1.8 assists in 384 games. Before the organization retired his jersey in March 2019, the two-time NBA champion ranked fifth in the all-time scoring leaders in franchise history with 6,914, seventh in blocks (332) and eighth in terms of rebounding with a total of 2,816.

After his partnership with Kobe Bryant officially ended, Shaquille O’Neal chose Dwayne Wade as his new partner-in-crime in 2004 to form the newest dominant duo in the league. O’Neal helped the team elevate its play and eventually win its first championship in franchise history during the 2005-06 season when they outlasted the Dallas Mavericks, 4-2, in the NBA Finals.

Shaq only spent less than four seasons with Miami and only played a total of 205 games, where he piled up an average of 19.6 points, 9.1 rebounds and 2.1 assists. The 7-foot-1 behemoth also placed himself as the leader of field goal percentage in the team’s history with 59%. Additionally, he also ranks sixth in blocks with 384.