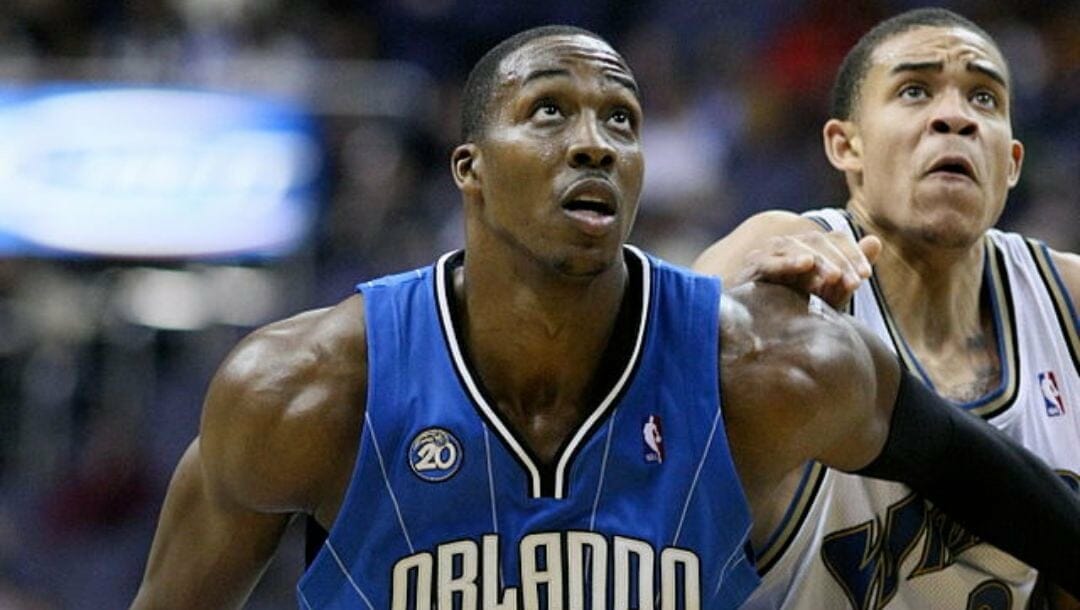 The Orlando Magic missed a playoff spot for the second straight season during the 2021-22 after finishing dead last in the Eastern Conference with only a 22-60 record. Their only consolation is that they were one of the teams to snag a top spot in the NBA lottery, which they should utilize to pick a key player to improve their NBA championship odds moving forward.

Regardless of the lowly season for the young Orlando team, which only has an average of 24 years, the team’s future is in good hands with young guns in Cole Anthony, Franz Wagner, Markelle Fultz, R.J. Hampton and Jalen Suggs.

These young players could look back at the team’s history where they experienced success and use it as a framework to make the Magic a perennial contender once again in the NBA odds. Speaking of success, we listed the top five greatest Orlando Magic players that helped establish the franchise around the league.

Selected as the team’s first overall pick in the 2004 NBA Draft, Dwight Howard instantly became an impact player for the team as he averaged a double-double. The big man played for eight seasons with Orlando and guided the team to six playoff runs from 2007 to 2012. The most memorable of them is the 2008-09 season, where they captured the Eastern Conference title and booked their place in the NBA Finals against the Los Angeles Lakers.

Although they lost to the Lakers, 4-1, the Magic had an incredible run that year with Howard as their main superstar. The dominant big man also collected several awards for the Magic through his three Defensive Player of the Year awards (2009, 2010 and 2011), six NBA All-Star selections and five All-NBA 1st Team inclusions. The 6-foot-10 center also set the records for the franchise’s most points (11,435), most rebounds (8,072), and the most blocks (1,344).

Before the Dwight Howard era in Orlando, the Tracy McGrady era ruled with the Magic. When free agency hit in 2000, McGrady decided to leave Toronto and sign with the Orlando Magic for a 7-year contract worth over $90 million. There, he solidified his reputation as one of the NBA’s dynamic scorers of all time as he averaged 28.1 points, along with 7.0 rebounds and 5.2 assists in 295 games across four seasons.

In his first year with the Magic, T-Mac won the Most Improved Player of the Year award. The high-scoring forward also appeared in his first NBA All-Star games in Orlando jerseys from 2001 to 2004. Unfortunately, the team shipped him away to the Houston Rockets in the 2004 offseason in a 7-player blockbuster deal.

After Golden State picked him as the third overall pick during the 1993 NBA Draft, Orlando swapped for Penny Hardaway in exchange for Chris Webber plus a few future draft picks, and it was all worth it for the team as he was one of the rising stars in the NBA during the 1990s. Hardaway went on to play for six seasons in Orlando.

He formed a powerful duo with Shaquille O’Neal, which allowed them to see action in the 1995 NBA Finals before being swept by the Houston Rockets. His tenure with the Florida-based squad saw him accumulate an average of 19.0 points, 6.3 assists and 4.7 rebounds for 369 games. The 6-foot-7 shooting guard was eventually traded to Phoenix for two players and two future first-round picks.

A year before Penny Hardaway was drafted, Orlando already had its foundational piece in the form of Shaquille O’Neal, who was picked as the number one overall pick in the 1992 draft. The 7-foot-1 center became a dominant player inside the paint and eventually captured the Rookie of the Year honors in 1993.

It was Orlando’s first experience of having a dominant man in the middle as Shaq averaged 27.2 points, 12.5 rebounds and 2.8 blocks in 295 games across four seasons. Despite falling at the hands of Hakeem Olajuwon in his first NBA Finals appearance, O’Neal certainly left his mark on the franchise before he signed to the Los Angeles Lakers in 1996 via free agency.

As an expansion team in 1989, the Orlando Magic was gifted the number 11 pick in the NBA Draft, and they used it to pick Nick Anderson as the franchise’s first-ever draftee. The Illinois product delivered and didn’t disappoint. Anderson played for 11 seasons with the Magic and put up 15.4 points, 5.3 rebounds and 2.8 assists in 692 games (the most games played in team history).

He was the first Orlando player to reach over 10,000 points in franchise history and eventually collected 10,650 points. Anderson was also part of the 1995 team that succumbed to the Houston Rockets in the NBA Finals. Unfortunately, he was traded in 1999 to the Sacramento Kings for Tariq Abdul-Wahad and a first-round draft pick.