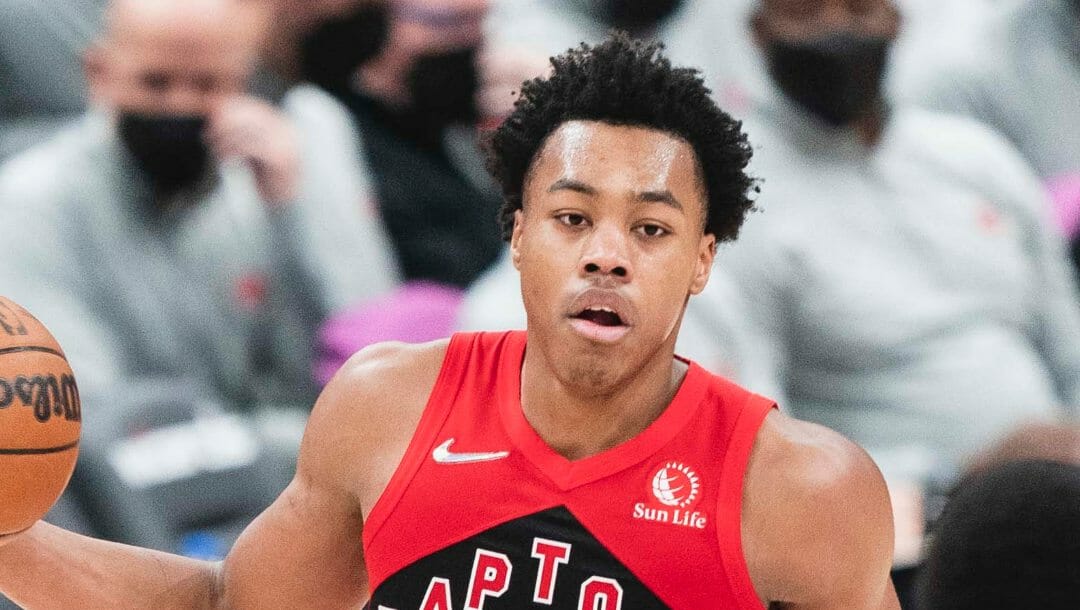 The Toronto Raptors have been blessed in their history with some good NBA finals odds thanks in part to a few standout rookie performances.

Many of these players had good NBA odds to win the Rookie of the Year award.

While no doubt a subject to be debated, here is my list of the Raptors’ top-5 rookie seasons.

The fourth player selected in the 2003 NBA Draft, Chris Bosh entered the league after spending one year at Georgia Tech University.

At 6-foot-11 and a relatively light 225 pounds, the 19-year-old was felt by many to be too slender to withstand the rigors of dealing with the NBA’s big men over the course of a grueling 82-game schedule.

Bosh proved his doubters wrong, averaging 11.5 points, 7.4 rebounds, and 1.4 blocks while logging 33.5 minutes per game. He primarily played center though power forward was regarded as his natural position coming out of college, playing in 70 games for Toronto, starting 63.

Bosh earned a spot on the All-Rookie team in what was a talent-laden draft class, featuring the likes of Carmelo Anthony, Dwyane Wade, and another 19-year-old – No. 1 pick and Rookie of the Year LeBron James.

Highly touted after an outstanding college career at UMass, the Raptors chose power forward/center Marcus Camby with the second overall pick in the 1996 draft.

A force at both ends of the floor, the 6-foot-11 Camby played in 63 games for the Raptors in his rookie year (starting 38), averaging 14.8 points, 6.3 rebounds in 30.1 minutes per game while earning an All-Rookie team selection.

He posted eight double-doubles, and his 2.1 blocks per contest ranked 10th in the NBA that year, sharing the spotlight with the league’s top big men.

The fourth player selected in the 2021 draft out of Florida State, the newly crowned Rookie of the Year Scottie Barnes comes in at No. 3 on my list.

Many pundits expected the Raptors to select Gonzaga point guard Jalen Suggs following the trade of Kyle Lowry to the Miami Heat. Any reservations were quickly put to rest as the accolades from coaches and teammates began to pour in throughout training camp that the 6-foot-9 Barnes was something special.

He displayed his immense talent in just the second game of the season when he poured in 25 points and added 13 rebounds in the Raptors’ 115-83 blowout of the Boston Celtics at TD Garden.

With this opening act, Raptors fans have a great deal to look forward to.

Fans may forget that the Raptors actually selected North Carolina standout Antawn Jamison with the fourth pick in the 1998 NBA Draft before turning around and trading Jamison to Golden State, in exchange for the Warriors’ pick at No. 5 – Tar Heel teammate Vince Carter.

Carter erupted on the NBA scene, a dynamic player whose offensive prowess not only brought attention to himself in his rookie year but to the still-growing Raptors franchise.

With the 1998-99 season shortened due to a lockout, Carter played in 50 games (leading the league), starting 49 and averaging 35.2 minutes per contest. The Raptors star poured in 18.3 PPG to go with 5.7 boards and 3.0 assists, capturing Rookie of the Year honors.

While it will no doubt come as a shock to some that Damon Stoudamire sits atop my list, it’s hard to argue with what the Arizona grad brought to the table in the Raptors’ inaugural season.

The first player drafted in Raptors history and seventh overall in the 1995-96 NBA Draft, Stoudamire quickly established himself as a premier offensive force amongst the league’s bevy of talented point guards.

At 5-foot-10, “Mighty Mouse,” as he was affectionately known, posted simply amazing numbers for a first-year player, much less playing for a newly-minted franchise.

He started 70 games for Toronto, registering an other-worldly 37 double-doubles while averaging 19.0 points and 9.3 assists per contest.