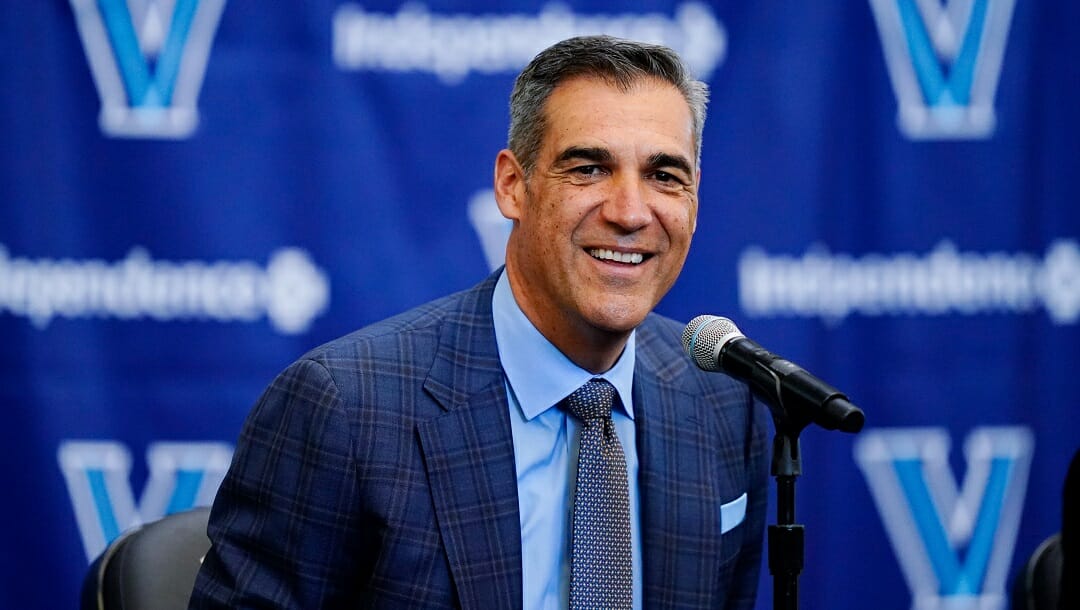 Villanova basketball wasn’t exactly an unknown program prior to Jay Wright’s arrival, as the Wildcats had reached the Elite Eight seven times between 1970 and 1990. They won the program’s first national championship in 1985.

But when Wright was introduced as the successor to Steve Lappas in 2001, he began the slow process of elevating the program from a small school with outsized influence to one with great college basketball odds every single year.

That culminated in the 2010s, when Wright won two national titles in three years, and his Wildcats were named Team of the Decade by the Associated Press.

Starting this season, we’ll have to watch closely how the online sports betting community handicaps Villanova without Wright’s guiding hand. But in the meantime, let’s bask in the career highlights of the man that is head coach Jay Wright.

If you thought Jay Wright’s first time on the Villanova sidelines started in the 21st century, think again. After graduating from Bucknell University in 1983 and gaining some experience as a young assistant, Wright was brought on as an assistant at Villanova under Rollie Massimino.

Massimino would have been just two seasons removed from Villanova’s magical 1985 national championship when he brought Wright on as a sideline protege. The two would ultimately spend seven years together, including two years in Las Vegas. Massimino left Villanova to replace Jerry Tarkanian at UNLV in 1992, and Wright followed him west.

Throughout much of his late-career success, Wright has constantly referenced Massimino as a huge influence on his career.

By the mid-1990s, Wright had soaked up enough of Massinmino’s experience from the sideline to branch out and head his own program. Wright returned to the mid-Atlantic region to accept his first head coaching gig at Hofstra.

Hofstra had struggled through most of its basketball existence, with its only two NCAA Tournament appearances coming in back-to-back years in the 1970s. But Wright slowly built them into a contender in the America East, winning consecutive conference tournament titles in 2000 and 2001 en route to his first March Madness berths as a head coach.

Ol’ Villanova came calling again after Wright’s second NCAA Tournament appearance with Hofstra. After a few mediocre years from Lappas, the administration decided to make a change and go after a promising young coach like Wright, who would be able to return to the Philly area and immediately know the lay of the land.

About one full recruiting class later, Villanova was primed to return to the national stage.

Villanova basketball really started to polish its status as a national brand in the latter half of the 2000s, when Wright’s program-building started to deliver tangible postseason results.

In 2005, the Wildcats scored a pair of top-5 wins in the regular season. The NCAA Basketball odds labeled Villanova’s wins over No. 2 Kansas and No. 3 Boston College, but Kyle Lowry & Co. ultimately rolled to a 22-7 record. They advanced to the Sweet 16 as a No. 5 seed before losing to eventual national champion North Carolina.

In 2006, Wright and Lowry posted another deep NCAA Tournament run. The Wildcats earned a No. 1 seed in the bracket for the first time in program history; this time, they advanced to the Elite Eight, where they were again knocked out by the eventual champion. (This time, it was Florida.)

In 2009, Wright and Villanova set new records again, posting a 30-win season en route to an appearance in the Final Four. In the national semifinals, it was against North Carolina who eliminated a promising Villanova team. It was the fourth time in five years that Villanova was ousted by the eventual champion.

For a few years in the early 2010s, Jay Wright became a victim of his own success. He had now been at Villanova for more than a decade, and the Wildcats were routinely competing for No. 1 seeds.

Unfortunately, early-round upsets were also becoming a bit too routine. Villanova suffered multiple embarrassing tournament losses, punctuated by a second-round loss to No. 8 NC State in 2015. The Wildcats were a No. 1 seed.

The blogosphere began to wonder aloud if Wright’s job was in jeopardy after 15 years, but Villanova’s patience was rewarded. Because in 2016…

Well, let’s be honest. You all know what happened next.

It’s hard to overstate how dominant a run Villanova went on through the latter half of the 2010s. Remember that 30-win season that set the single-season mark for Villanova in 2008? Well, Wright’s squads broke that mark every year for four straight years from 2014-18, setting the current record with 36 wins in 2018.

Naturally, 2018 is also the year where Wright doubled down on his championship legacy, coaching the team to its third championship in program history and its second in three years.

2021: Jay Wright is Inducted into the Naismith Basketball Hall of Fame

You don’t win 500 games and two national championships without drawing the eye of the Hall of Fame. So one year before he announced his retirement, Jay Wright received his invitation to the Naismith Basketball Hall of Fame.

But Wright wasn’t quite done yet. Because in the 2022 NCAA Men’s Basketball Tournament, Wright notched his fourth career trip to the Final Four.

He would announce his retirement less than a month later.

Not a bad send-off.

When the action starts on the court, the action doesn’t stop at the sportsbook.