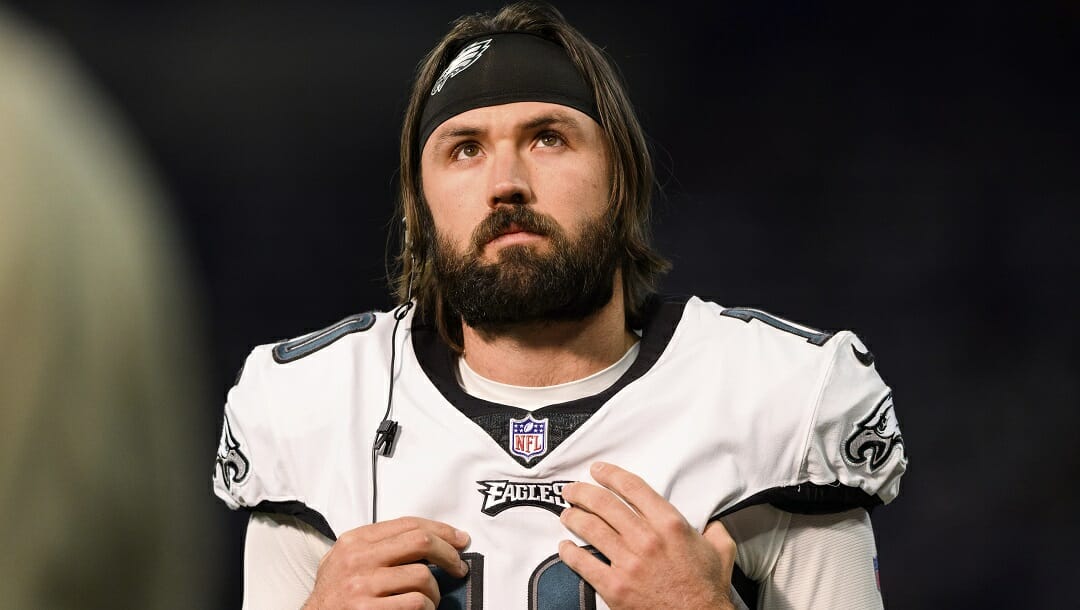 The Eagles are the likely No. 1 seed in the NFC playoffs with great odds to win the Super Bowl. They’re a daily topic of conversation in NFL betting circles.

However, they’re also a tricky handicap, since Gardner Minshew is now temporarily filling in as starting quarterback thanks to Jalen Hurts’ shoulder injury.

Who Is the Quarterback for the Philadelphia Eagles?

Gardner Minshew is currently the quarterback for the Philadelphia Eagles since typical starter Jalen Hurts is, uhh, hurt.

Gardner Minshew is best known for his final season at Washington State, but the Eagles quarterback had a winding road during his collegiate year. He landed at Troy for his true freshman year in 2014 but opted to transfer to JuCo Northwest Mississippi Community College just one year later after it was clear he couldn’t win the starting job.

After winning a JuCo national championship, Minshew left for East Carolina in 2017, where he played for two seasons and graduated.

Minshew took advantage of graduate transfer rules to play a final year under head coach Mike Leach at Washington State, where he ultimately ended up on the radar of NFL teams.

Gardner Minshew had 5,969 passing yards and 41 touchdowns at the start of the 2022 NFL season.

Gardner Minshew threw for a combined 8,266 yards and 62 passing touchdowns during his three years of Division I college football.

Gardner Minshew’s Saturday start in Dallas was the 23rd start of his career. Most of those starts (20) came in a two-year stint with the Jacksonville Jaguars.

Gardner Minshew is in the fourth and final year of his rookie contract, which pays him $2,540,000 in base salary. He will enter the 2023 offseason as a free agent.

Gardner Minshew was drafted by Jacksonville with the 178th overall pick in the sixth round of the 2019 NFL Draft.

For several weeks, the Eagles have been a huge NFL betting favorite to win the NFC East and seize the No. 1 seed in the NFC playoffs.

Technically, though, that coronation is still on hold, thanks to Jalen Hurts’ shoulder injury. Despite a hot start, Minshew and the Eagles weren’t able to hold on against the Cowboys in Week 16, so the Eagles still need one more win to lock up their prime seasonal position.

If Minshew can’t deliver a win against the Saints (6-9) this week, there could be pressure on Hurts to return in Week 18 – regardless of his health status.

As of this writing, it’s likely that Minshew will start once again for the Philadelphia Eagles in Sunday’s home game against the Saints, allowing Hurts another week to recover from his shoulder sprain.

The Eagles only need one more win to secure the NFC East title and the No. 1 seed in the NFC playoff picture.

Over at the BetMGM online sportsbook, the Eagles are currently 6.5-point home favorites against the visiting New Orleans Saints.

That’s a line that implies Hurts will again sit this weekend since a full-strength Eagles team would likely lay north of a touchdown versus a sub-.500 Saints squad.

One of the more amusing parts of Saturday’s NFC East showdown occurred when Minshew routinely threw the ball away… and happened to throw a bullet right at Fox reporter Erin Andrews on the sideline.

I married a hockey player. Hit it with my wrist and move on. Hot https://t.co/CY1zEkNPHf

Gardner Minshew is infamously a big personality. He often keeps a silly-looking mustache and presides over legendarily amusing interviews and press conferences.

Given his reputation for antics, you may not be surprised to learn that Minshew lived for most of the last offseason in an old prison bus that he rented and parked outside of a gym in Florida.

Naturally, the Eagles are a huge topic of discussion right now in the NFL odds community. I’m watching them, and their betting odds, very closely.

For more on the Eagles, as well as a broader analysis of various NFL betting lines, make sure you subscribe to The Lion’s Edge for intelligent, weekly insights into trends and betting tips across the online sports betting world.