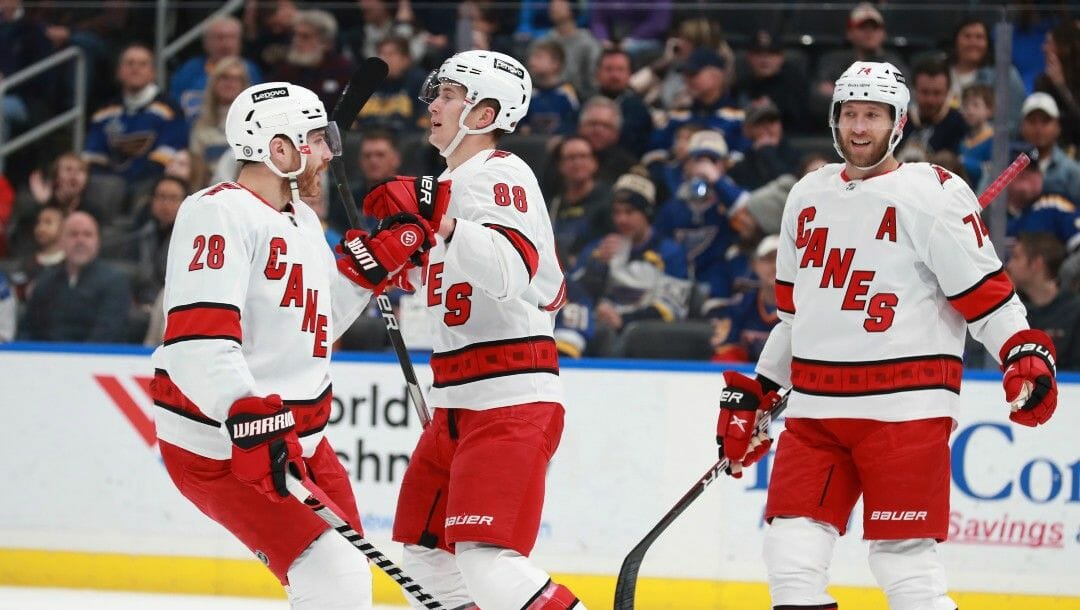 The NHL season is winding down, which means the playoffs are almost here and NHL betting is heating up.

While many look at NHL betting lines for individual games, there’s also the chance to take a look at NHL Stanley Cup odds and get a good price before the playoffs even begin.

Over the past month, the playoff picture has been coming into focus, and we’re getting a clear idea of which teams are the most significant threats.

Remember, standings only affect seeding, and all teams start on an even playing surface in the playoffs.

The Colorado Avalanche have been riding high this whole season and are one of the deepest teams in the league.

The Avs are holding on to the best record in the league, three points ahead of the Carolina Hurricanes thanks to a potent offense that features five players scoring above a point a game in Nazem Kadri, Nathan MacKinnon, Mikko Rantanen, Gabriel Landeskog, and Cale Makar.

What an incredible play by Cale Makar. He breaks up an odd-man rush and leads the attack the other way. That set up a helluva Nathan MacKinnon-Nazem Kadri-Nathan MacKinnon sequence. pic.twitter.com/DZO8RbWOyL

The Avs took a bit hit with Landeskog being out due to injury, but it appears as if he’ll be available for the playoffs. Colorado had a tough start to March, losing five of six games but have turned it around of late with four wins in their past five outings.

The Avs are second overall in NHL scoring, averaging 3.78 goals per game, slightly down from their pace earlier in the season. However, they’ve improved to seventh in opponent scoring, allowing 2.77 goals per game.

At +400, the Avs are a strong bet and the favorite heading into the postseason.

The Florida Panthers are the one team in the NHL that can go blow for blow with the Avs on offense. They don’t have as many elite scorers, but the Cats hit you with a much deeper roster.

Florida also added Claude Giroux at the trade deadline, making them all the more dangerous. The Panthers have three lines that can punish opponents and they average 4.06 goals per game but are weaker than the Avs on the defensive side, 13th in opponent scoring (2.84 goals per game). In March, Florida has won eight of 10 games and lost only once in regulation.

The East looks stronger than the West, so the Panthers will probably have a more challenging road to the Stanley Cup Finals and at +550, they’ve lost some of that extra value they had earlier in the season.

I don’t think that Carolina is flying under the radar anymore but at +1000 they are still underrated.

The Hurricanes lead the league in opponent scoring, allowing only 2.37 goals per game, and that stellar defense doesn’t come at the cost of offense, as Carolina is 10th in NHL scoring, averaging 3.25 goals per game.

Defense wins championships, and no team is as strong in their end as the Canes. Carolina has arguably the best defensive core in the league and Frederik Andersen has been great in net for them this season.

The Maple Leafs have all the pieces to win a Stanley Cup, except the one that matters the most. Goaltender Jack Campbell has floundered down the stretch and has been sidelined due to injury. And then Petr Mrazek has struggled to replace him.

Auston Matthews has emerged as a Hart favorite and could also take home the Selke and Richard trophies behind his NHL-leading 46 goals despite having played at least five fewer games than the next four top goal scorers.

The Leafs are also getting scoring from William Nylander, John Tavares, Michael Bunting, and Mitch Marner, as each of them has 20 or more goals this season.

Toronto is third in NHL scoring, putting up 3.65 goals a game, however, the Leafs have fallen to 17th in opponent scoring, allowing 3.02 goals a night.

Toronto has some value at +1200, but it’ll be tough to go all the way without more consistent goaltending.