Patrick Mahomes Took ‘Another Step’ Toward Hall of Fame 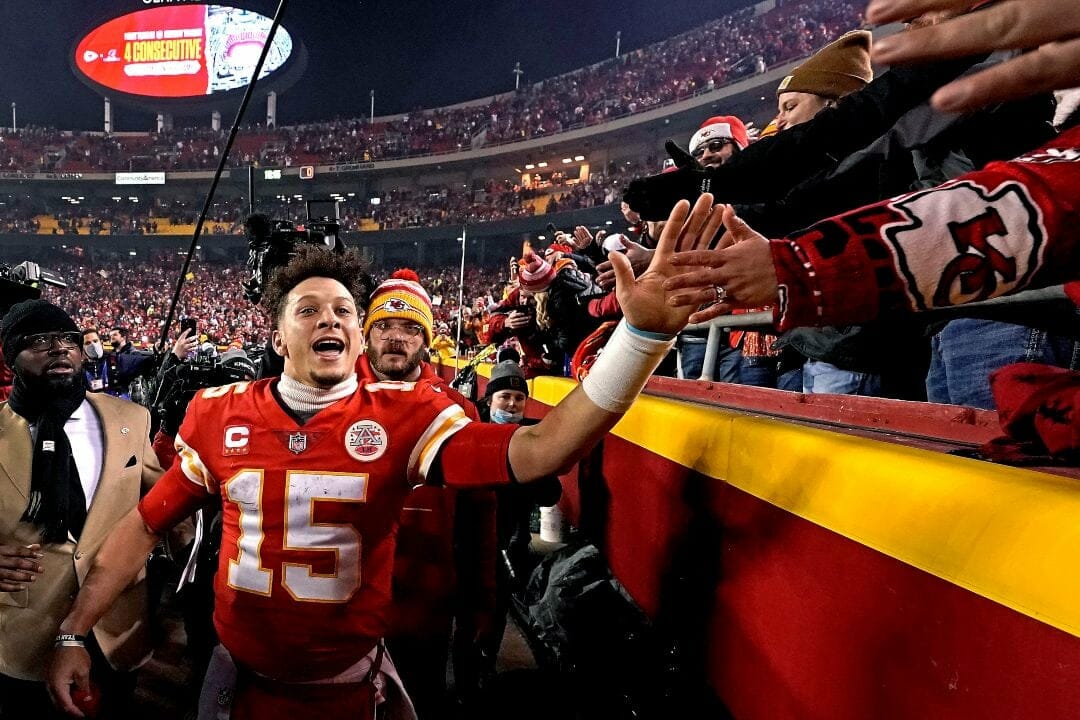 All he had was 13 seconds to stave off elimination. It was all Patrick Mahomes needed.

The Kansas City Chiefs quarterback, who has the best Super Bowl MVP odds at +180, needed to orchestrate a drive with only a few moments remaining. He had thrown a touchdown pass a little over a minute ago for the lead, yet Josh Allen and the Buffalo Bills responded with a score of their own.

The Chiefs, nonetheless, illustrated a rare level of poise. Knowing they could turn to one of the best quarterbacks in the league helped quell apprehension.

Mahomes compiled a game-tying possession at the end of regulation and then fueled another drive to open overtime, advancing the Chiefs to their fourth consecutive AFC championship game.

As a 7.5-point favorite in NFL odds, they host the Cincinnati Bengals on Sunday. Kansas City’s Super Bowl betting odds are +120.

That’s, in no small part, because of Mahomes’ phenomenal production when it matters most. His combination of intelligence, physical skills and, poise will undoubtedly be a headache for opposing defenses.

“When it’s grim, be the grim reaper and go get it,” Chiefs head coach Andy Reid recalled telling Mahomes late in the game. “He did that. He made everyone around him better, which he’s great at. He just does it effortlessly. When it gets tough, he’s going to be there battling.”

They lined up for a play, down three points at their 44-yard line with eight seconds remaining. The Bills called a timeout. Travis Kelce took note of Buffalo’s defensive alignment.

“If they do it again,” Mahomes remembered the All-Pro tight end telling him, “I’m going to take it right down the middle between both the guys guarding me.”

The play didn’t call for Kelce to do that, but Kansas City needed him to be open. And he was.

This was in the midst of perhaps one of the most exhilarating finishes pro football has ever seen. Allen and the Bills scored 14 points in the final two minutes, and the Chiefs answered back with 10 in the final 1:02.

With Mahomes on their side, the Chiefs were adamant they could pull out the win.

“If you’re not going to go down fighting,” Mahomes said, “then you don’t deserve to be here.”

Only 52 seconds after the Bills gained the lead, Mahomes threw a strike to Tyreek Hill over the middle. He did the rest, running 64 yards for a touchdown.

In overtime, Mahomes and the Chiefs put together an eight-play, 75-yard drive that set up Kelce’s game-winning catch.

“To be in this moment, in this game against that team, and to make a play, to walk-off a game at Arrowhead [Stadium],” Mahomes said, “I’ll remember this for the rest of my life.”

Mahomes wasn’t playing at his best to begin the year. The Chiefs lost four of their first seven games, and he wasn’t exempt from blame. That led Pro Football Focus to rate him as the 13th-best passer in the league for the season.

But down the stretch, the signal-caller has been even more than expected. He helped his team throttle the Pittsburgh Steelers to open the postseason. A week later, against the best defense according to Football Outsiders’ total DVOA metric, Mahomes delivered.

Allen made throw after throw which were jaw-dropping. Going into the game, the Bills led the league in hurry rate. It appeared to be a formula to top the Chiefs. It wasn’t.

When the Bills heavily ran zone defenses to start, Mahomes found open space as a runner and finished with a game-high 69 rushing yards. When Buffalo was forced to turn to man coverage later, Kelce and Hill burned its secondary.

The Bills’ efforts were inconsequential. Mahomes was a step ahead.

With him playing as he has, with one of the most well-rounded teams behind him, the former MVP is going to be troubling to stop.

In fact, Hill called Mahomes’ showing “definitely another step for him into the Hall of Fame.”