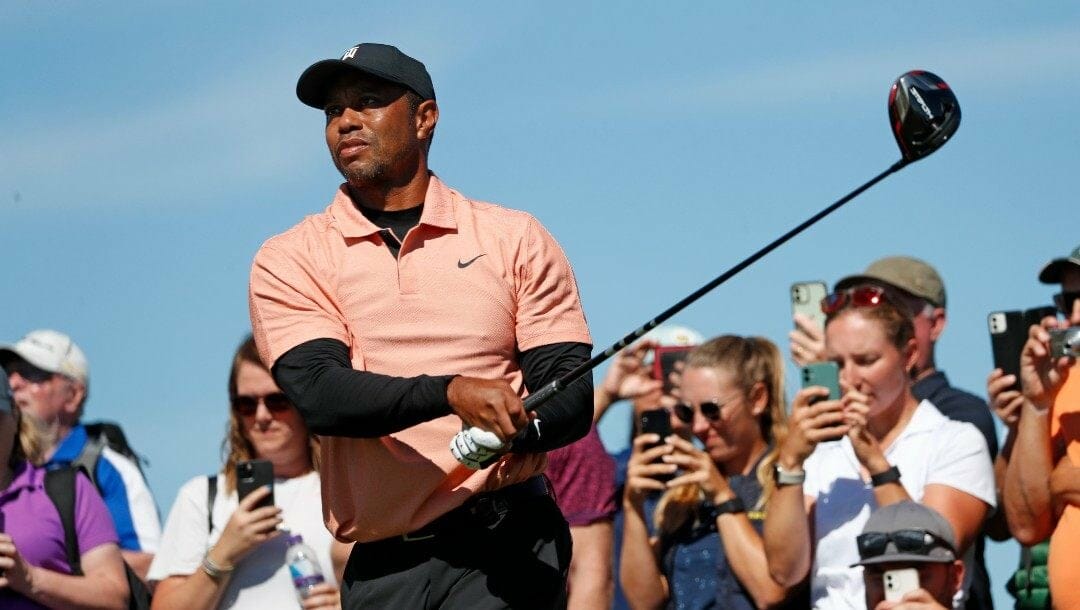 For the third time this season, Tiger Woods will play in a PGA Tour event this week at the British Open at St. Andrews.

While he’s +6600 in British Open odds, that doesn’t mean the public is shying away from betting on the legendary golfer. As of Tuesday at BetMGM, Woods is pulling in the second-most tickets (5.7%) and third-most handle (6.7%).

Although Woods has made the cut in both events he’s played in, he finished in 47th place at the Masters and withdrew from the PGA Championship after the third round.

Following the PGA Championship in May, Woods set his eyes on St. Andrews for the 150th edition of the Open Championship. Because of this, he opted to skip the U.S. Open to ensure his body was ready.

“For the most part of my rehab I was just I was hoping that I could walk again, you know, walk normal and have a normal life and maybe play a little hit-and-giggle golf with my son or my friends at home,” Woods said to reporters Wednesday. “But lo and behold, I’ve played championship golf this year. And once I realized that I could possibly play at a high level, my focus was to get back here at St. Andrews to play in this championship being, as I said, it’s the most historic one we’ve ever had.

“I just didn’t want to miss this Open here at the home of golf.”

At BetMGM, Woods is the biggest liability.

“Tiger Woods is already a significant liability for BetMGM at The Open Championship. Judging from his last few tournaments, playing four days in a row seems to put incredible stress on Tiger’s body, so we’re comfortable with the huge liability,” Jason Scott, BetMGM’s VP of Trading, said.

Betting on Woods to win outright isn’t the only option, either.

Some special prop bets have been released in anticipation of Woods teeing it up at the British Open.

Below is the full list at BetMGM (as of Wednesday morning).

In terms of bets non-exclusive to the first round, Woods making the cut and/or finishing in the top 40 appear to be the best values. Anything higher than that would be extraordinary considering the circumstances.

But, Woods has played much more in the days leading up to the British Open than he did for either the Masters or PGA Championship. This should be taken as a sign that his body is feeling good.

Shooting 68 or lower would be 4-under or better. If there is no wind, it would seem this is possible. But, Woods’ best round this year is 69 during the second round of the PGA Championship.

Woods has made five or more birdies in a round at St. Andrews a few times. In his last 10 rounds at the course, he’s done it four times. It should be noted he played a lot of these rounds in tougher conditions than what is expected on Thursday.