The French came up with the word “mascot” 150 years ago. It means “lucky charm”, so it’s meant to bring luck to whoever – or whatever – it represents. Now when it comes to NBA mascots, you’ll know that some have done their job while others have been a furry or feathery flop. Let’s take a look from worst to best.

You know what they say about trying to please all the people all of the time? For some, it might be tough enough to figure out why a maverick (an independent-minded person) is represented by a horse but it gets worse. The Mavericks’ second mascot – Mavs Man – has been described as “the Frankenstein lovechild of a basketball and Dolph Lundgren”!

The 76ers marketing team obviously had their eye on the merchandise when they set the designers loose on what was meant to be their talisman. The first thing that slipped from fans’ lips was, “A dog? Really! And why a blue dog? I don’t get it.” And it’s been like that ever since. Franklin the dog is meant to represent Philadelphia’s favorite son – no, not Rocky, Benjamin Franklin of course. The color blue came out of a kiddies’ marketing research group. Go figure!

We give Burnie creds for his dance moves. Performing in a costume like that calls for the prowess of an Olympic athlete. But we just don’t know what Burnie is. Okay so we get the play on words – Heat and Burn-ie – but the rest is lost on us. We’re told, “Burnie is a rough, anthropomorphic depiction of the fireball featured on the team’s logo” but the Heat should have known – “anthropomorphic” was never going to be a catchy marketing or fan phrase.

One motorcycle riding Bear in the NBA is enough! And that’s the good part. It’s all downhill from there. First off, “Clutch the Bear” ain’t the slightest bit a rocket, that much is obvious. Next off, he doesn’t even look like a bear, he looks like a mouse. And “Clutch” the Bear, really? He looks cute enough so why give him a name that’s just plain creepy?

We think the Wizards could have done better than a full skinsuit and huge fake muscles. That’s the one mascot. The other at least has a red wizard’s hat and looks a bit more like a magical creature than a genetic mutation.

“C” is for confusion in this case. The reason for coming in at #20 in the standings is that Cleveland fans have to work hard to get the meaning behind “Sir CC and Moondog”. So, we get that Sir CC is a “Cavalier” (a soldier from the English Civil War from the 1600s) but we just don’t think a Cavalier back then would have had a loyal hound named “Moondog”. Turns out, the original Moondog was the famous Cleveland rock DJ, Alan Freed.

​Chuck was introduced to Clippers’ fans in February 2016. The pink and blue bird is loosely based on the California Condor – North America’s biggest land bird with an almost 10’ wingspan – which can reach speeds of 56 mph and fly as high as 15,100 feet. But Chuck’s gone down like a lead balloon with fans who have flipped it the bird. Kanye West – who says he’s like a bird – has offered to redesign the NBA mascot but no-one so far has taken up his offer.

Who’s keeping an eye on the merchandisers in Indianapolis is what we want to know. Definitely not the Pacers. If your good luck charm is meant to be a noble hardworking horse, why would you use a big cat to represent your team? We’re still waiting for an answer…

Nothing personal, Jazz Bear. Kudos for commitment. All those hours of community service since you came into the league in 1994, and the torn bicep and ruptured tendon picked up while performing for fans. But March Madness is nothing compared to all the confusion he’s caused. Okay so there are black bears in Utah but Jazz Bear ain’t black and we don’t get the jazz connection.

This started so well. Yes, they got the animal right. A hawk to represent the Hawks but then the plot got lost. Harry the Hawk is red. We don’t know why because hawks don’t come in that color. And Harry looks too angry to appeal to kids and too, well, red to appeal to basketball fans. This could have been a slam dunk but it missed by a mile.

So this one was always going to call for some creativity. There isn’t an animal that exactly jumps out at you when you say “Trail Blazers”. But there are professional people out there who can help and we don’t think Blaze is what they would have come up with. For one thing, the cat angle’s been done to death and the red shiny bodysuit and silver underpants would look better on the Houston Rockets’ Clutch the Bear!

“Bango the Buck” gets points for being community-minded (he pulls off around 250 community appearances every year) and it isn’t easy doing high-flying dunks and daring stunts when you’re cute and cuddly. No doubt Bango’s been getting the job done since 1977. He’s even been an NBA mascot of the year and was voted first “Most Awesome Mascot” by the Cartoon Network. We just think it’s time for an update – it’s been 10 years since the last makeover Bango!

Turns out the only grizzlies in Memphis are basketballers and in Tennessee the only bears are black bears. So somebody got their bears muddled but at least the grizzlies stuck to their name. He jumps through fiery hoops but hasn’t yet ridden a motorcycle. 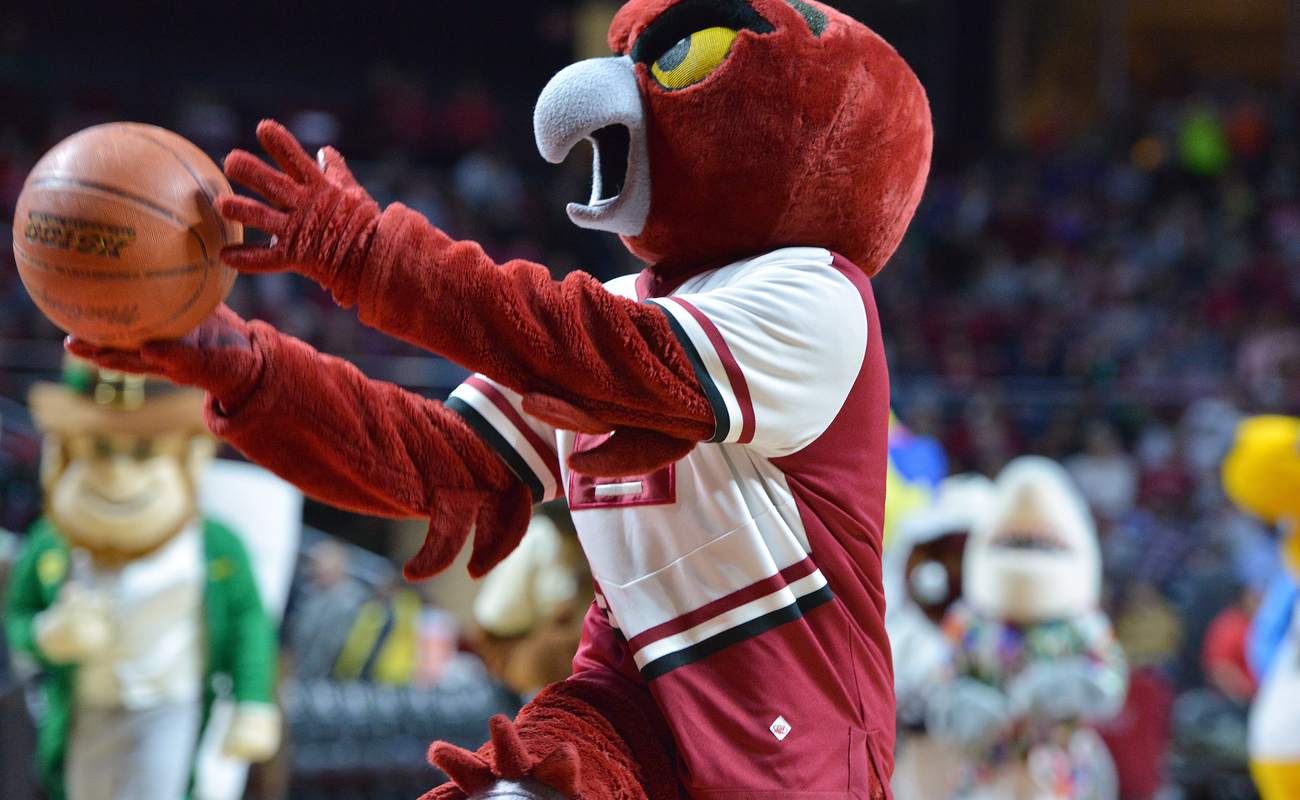 Now this one we get. A talking motorcycle or car would’ve been weird and the costume logistics a nightmare. Next best thing? A horse with piston pumping legs. Hooper the Horse is a sensible choice.

“Crunch the Wolf” is one of the best looking NBA mascots out there and he has a cool backstory. Turns out he was born in a Minnesota forest and grew to love basketball. So when Minnesota’s Timberwolves came to town, Crunch said goodbye to all he had known and migrated south to the Twin Cities. It’s said he now has a den somewhere deep inside the Target Center and is lured out on game-days by the deafening howl of Wolves’ fans. Crunch has the face, he has the body, but does he have the name?

“Rumble the Bison” ticks most of the boxes. He’s fierce, athletic and actually looks like a bison. If you’re wondering what a bison has to do with thunder, here things get clever. Bison have always been a symbol of the North American prairies and when they stampede, they create a sound that some say is similar to thunder.

With all the cats and bears around, “Hugo the Hornet” is a breath of fresh air. We like Hugo not only for his cool Jordan-clad feet and because he is a four-time winner of the NBA Mascot Slam Dunk Championship. He was created in 1988 by Cheryl Henson, daughter of the late, great Jim Henson of the Muppets and Yoda fame.

The Sacramento Kings’ “Slamson the Lion” is a lot more realistic than he was back in 1997. We like him for his name too. Our only criticism? Sacramento has plenty of raccoons, possums, skunks, birds, deer, and coyotes … but no lions.

It’s the same with the Phoenix Suns. Gorillas have never called Phoenix, AZ, home. But one does and that’s “The Gorilla”, or just “Go” once you’re acquainted. He’s the Lady Gaga of NBA mascots. One of a kind and a trendsetter. Nobody messes with the pioneer of trampoline dunks, not even those he pulls his legendary pranks on.

Now this one we get. “Lucky the Leprechaun” is a real half-man, half-mascot that every fan can identify with. The pipe-smoking, green-waistcoated, shamrock-adorned leprechaun is the perfect symbol for his team. And for those fans who believe little men in sugarloaf hats really do exist, as a mascot he’s scary good.

You’ll find plenty of coyotes in Texas and, as far as coyotes go, “The Coyote” is a snazzy dresser. His main claim to fame is that he’s the only NBA mascot to dunk both a basketball and a donut in a single game. We just wish the San Antonio Spurs would do something about those eyes!

So, “Stuff the Magic Dragon” should be at the “worst” end of this list but what could the Magic do with a name like Orlando Magic? So they did the only thing they could do. They went way over the top with a fluffy green magical creature with floppy pink ears and a blue unibrow. Go Stuff!

The Raptors get points for not shying away from the whole dinosaur thing and opting for a horse or a bear instead. No, they went for a red velociraptor in basketball shoes and jersey. Our fav “Raptor” moment? Little Girl vs. Mascot Dance Battle!

Okay, so a lion is not a nugget but what were the Denver Nuggets meant to do? The only shiny gold nugget that’s appealing in any way is a real shiny gold nugget. One on legs is a definite no. So they went with “Rocky, the Mountain Lion”, a Rocky Mountain lion that’s as cute as a nugget.

Opponents were told to “fear the birds!” and fans cautioned never to “stare into his eyes for more than a few seconds”. “Pierre the Pelican” had a reputation for scaring kids and making fans cry before he got a facelift in 2013. Now he’s all about giving fans the Pierre-fect game experience.

The best thing about “Benny the Bull” is his horns and unibrow. We know Benny can dunk, and he’s a fearsome entertainer, so the orange and pink hairdo keeps it on the lighter side for the kids. Benny’s also top of the league when it comes to stamina – he’s been doing it for fans for almost 50 years and shows no signs of slowing down. He earned his recent NBA Mascot of the Year honor, no doubt about it. 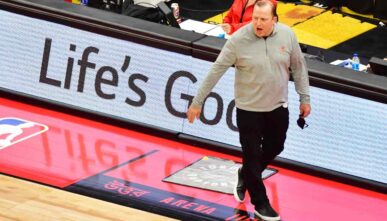 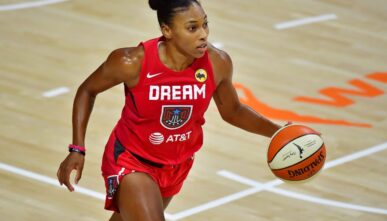 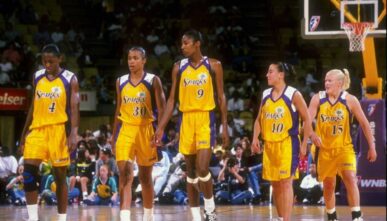 Sports
Promotions
Affiliates
About Us
We use cookies to ensure that we give you the best experience on our website. If you continue to use this site we will assume that you are happy with it.Ok