Top 5 Boxers With Most Division Titles 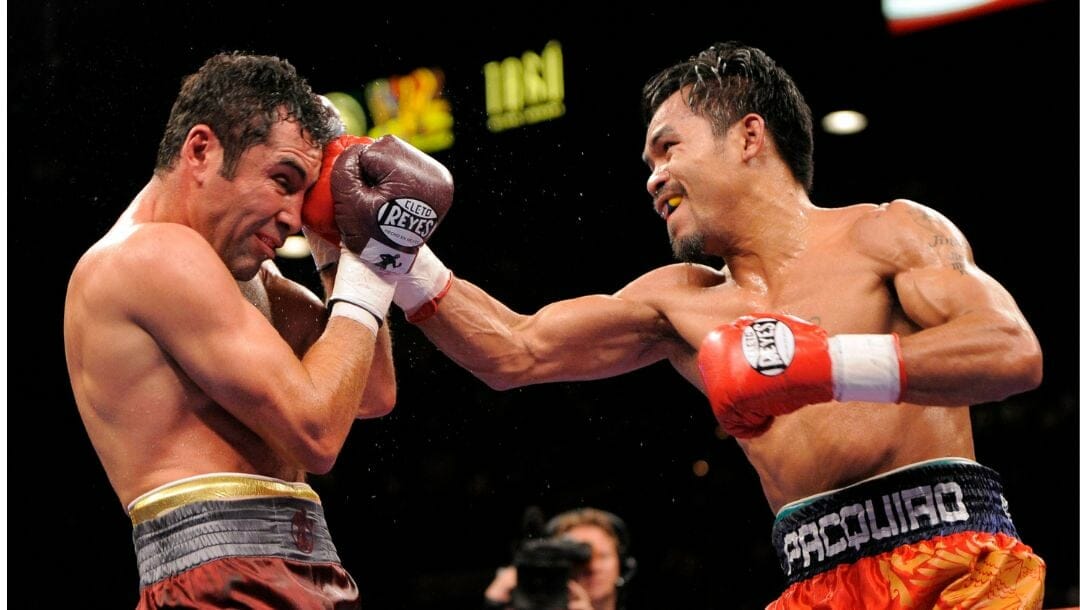 Being a champion in a division in boxing is already an impressive accomplishment. Still, certain fighters defied the boxing odds to claim more championships in a different weight class. This feat has given birth to pound-for-pound champions.

These pound-for-pound fighters have found success because they masterfully carry the same speed, power, and skillset to any division they would like to compete in. This bold move to up in weight has made these iconic boxers a household name on the online boxing betting lines.

Here are the top five boxers with the most division titles.

The Filipino sports icon Manny Pacquiao (62-8-2) started as a flyweight and won his first title in December 1998 when he knocked out Chatchai Sasakul in the eighth round of their match. In 2001, he dethroned Lehlo Ledwaba via sixth-round TKO to win his second title, the IBF Super Bantamweight belt.

Then, the Philippines’ senator took out two Mexican legends in Marco Antonio Barrera (11th round TKO) and Juan Manuel Marquez (split decision) in 2003 and 2008 to pick his third and fourth title in the featherweight and super featherweight divisions. The ”Pacman” didn’t stop wreaking havoc in the upper class as he moved to the 135-pound and 140-pound division, where he dominated former champions David Diaz (9th round TKO in 2008) and Ricky Hatton (second-round KO in 2009) to tie Oscar De La Hoya’s record for six division titles.

Pacquaio officially eclipsed De La Hoya’s feat by moving up in the welterweight division to challenge Miguel Cotto, which he lopsidedly dominated throughout the fight, stopping the Puerto Rican star in the 11th round. Finally, in 2010, Manny Pacquaio captured his eighth wonder over Antonio Margarito with yet another impeccable performance in a masterful unanimous decision victory to formally cement the boxing record.

Oscar De La Hoya (39-6) was the record holder for the most titles in the different weight classes at six before Manny Pacquiao shattered it in 2009. Like the Filipino superstar, De La Hoya began to collect his belts in the lower-weight class. He first victimized Jimmi Bredahl in 1994 to win the super featherweight strap. In the same year, he immediately became a two-division champion by beating Jorge Paez in July 1994 and claimed the lightweight title over him.

His third title triumph came at the expense of the legendary Julio Cesar Chavez in June 1996, where he obliterated the Mexican to win the light welterweight title. The Golden Boy’s quest to be a four-weight titleist was hard, as Pernell Whitaker tested him in their welterweight showdown in 1997 via unanimous decision.

That tough test didn’t hinder De La Hoya from moving up to another weight class and challenged Javier Castillejo in June 2001 for the light-middleweight belt, wherein he unanimously won over the Spaniard. Three years later, the American star finally got his sixth division title when he defeated Felix Sturm to earn the middleweight championship belt.

Undefeated boxing superstar Floyd Mayweather Jr. (50-0) is considered one of the best boxers of all time. One of the main factors to this claim is his pound-for-pound resume which consists of five different titles in five different weight classes. He started his boxing championship run in the super featherweight when he finished Genaro Hernandez in the eighth round to win his first-ever title in 1998.

Mayweather dominated the division for four years before jumping into the higher divisions, where he masterfully defeated Jose Luis Castillo in 2002 to pick up the lightweight belt. Three years later, ”Money Mayweather” added the junior welterweight to his collection after stopping Arturo Gatti in the sixth round of their encounter.

The American boxing icon solidified his place in the upper echelon of the boxing world by winning over Zab Judah and Oscar De La Hoya in 2006 and 2007 to become a five-division world champion by taking the welterweight title and super welterweight titles, respectively.

Before the likes of Pacquiao, De La Hoya and Mayweather Jr., Sugar Ray Leonard (36-3-1) was the second five-division champion. Leonard has won titles from the welterweight division to the light heavyweight in nine years, from 1979 to 1988. First, he scored a late stoppage of Wilfred Benitez to pick up his maiden world championship. After two successful defenses of the title, he went up to the super welterweight division and produced a 9th round stoppage of Ayub Kalule for the WBA Super Welterweight Championship.

Leonard’s third title came in 1987 when he eked out a close split decision victory over Marvin Hagler before moving up to face Donny Lalonde in a big match that had the super middleweight and light heavyweight title on the line. Sugar Ray Leonard finished Donny Lalonde in the 9th round of their title showdown to become five titles in five different divisions.

Simultaneous to Sugar Ray Leonard’s rise as boxing’s pound-for-pound titlist is the equally impressive run of Thomas Hearns (61-5-1). The Detroit star got his first of these five championships over Pipino Cuevas in August 1980 through a second-round TKO finish and became the welterweight titlist. Two years after that momentous win, he climbed up in the super welterweight division to defeat Wilfred Benitez and pick up his second title in 1982.

Hearns defended that title on several occasions, then moved up again to the middleweight, super middleweight and light heavyweight divisions to find success by winning against Dennis Andries, Juan Domingo Roldan and James Kinchen, thus putting his name in the boxing records book for the five titles he held throughout his professional career.