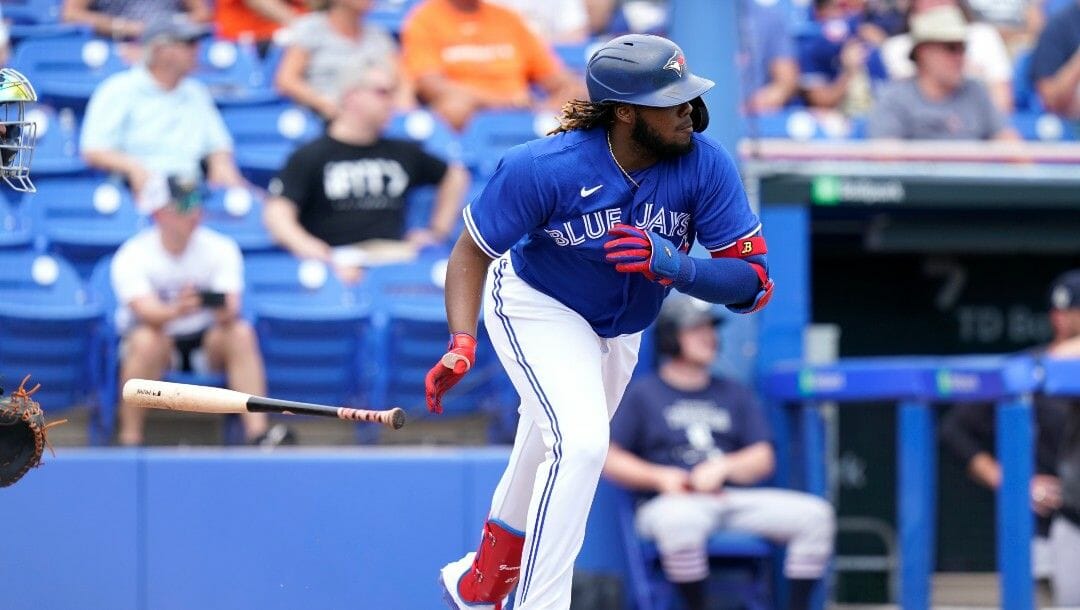 MLB betting is back with the regular season getting underway this week.

After just missing out on the postseason last year, the Toronto Blue Jays are expected to take a giant leap forward in 2022, which is reflected in their MLB playoff odds.

Loaded with talent from top to bottom, the Jays are poised to be among the best and most exciting clubs in all of baseball.

In what should be a fun year north of the border, let’s have a look at some of Toronto’s best team props as Opening Day nears.

At +180, oddsmakers feel good about the Blue Jays securing just the franchise’s second division title in the last 29 years and first since 2015.

Despite having to compete in the notoriously tough AL East, Toronto boasts arguably the division’s best lineup on paper, with an offense that features the likes of AL MVP runner-up Vladimir Guerrero Jr., All-Stars Bo Bichette and Teoscar Hernandez, as well as former World Series MVP George Springer.

Here are Vladimir Guerrero Jr's 4 longest home runs of the 2021 season (including the All-Star Game, because how can we not!)

While the club did lose Marcus Semien in free agency, management was able to acquire third baseman Matt Chapman from the Oakland A’s, who carries with him 30-home run potential and elite defensive play.

While the Yankees and Red Sox are capable of putting up runs, they have serious questions when it comes to their respective pitching staffs.

As for the defending AL East champion Tampa Bay Rays, they led the division in runs scored last season and have one of the best bullpens in all of baseball, so while it wouldn’t surprise me to see Kevin Cash’s group make a run, the overall firepower of Toronto’s lineup 1-9 is likely what will win out in the end.

Despite playing half of their home games in Buffalo and dealing with year-long bullpen struggles, the Jays still managed to win 91 games in 2021.

It should be a different story this year, however, as the club is back in Toronto full-time, while the bullpen, headed by Jordan Romano, Adam Cimber, and Julian Merryweather, looks as strong as it has in recent memory.

Health permitting, Toronto should be a lock for 93 or more wins.

While the Los Angeles Dodgers are heavy World Series favorites at +500, there are certainly flaws, particularly in the starting rotation. Walker Buehler and Julio Urias are a solid one-two-punch, but that’s where it starts to get murky.

Clayton Kershaw is no longer the pitcher he used to be, while Andrew Heaney and Tony Gonsolin do not exactly strike fear into opposing batters. Furthermore, Dustin May continues to recover from Tommy John surgery and will open the year on the 60-day DL. The Dodgers bolstered their bullpen with the acquisition of former White Sox closer Craig Kimbrel, but chinks have appeared in his armor of late.

LA’s offense is elite, but then again, so is Toronto’s. With that said, the Jays represent tremendous value at its current +900 odds.

This prop goes along the lines of what I mentioned earlier. With its stacked lineup, Toronto will have a full 81 games at Rogers Centre, a place where it was 25-11 last season.

In fact, following the club’s return from Buffalo, Charlie Montoyo’s squad was on a 99-win pace. Fielding one of the best rosters in franchise history, a 100-plus win campaign is certainly in the cards.