Carlos Correa Contract: Will the Saga End With the Minnesota Twins? 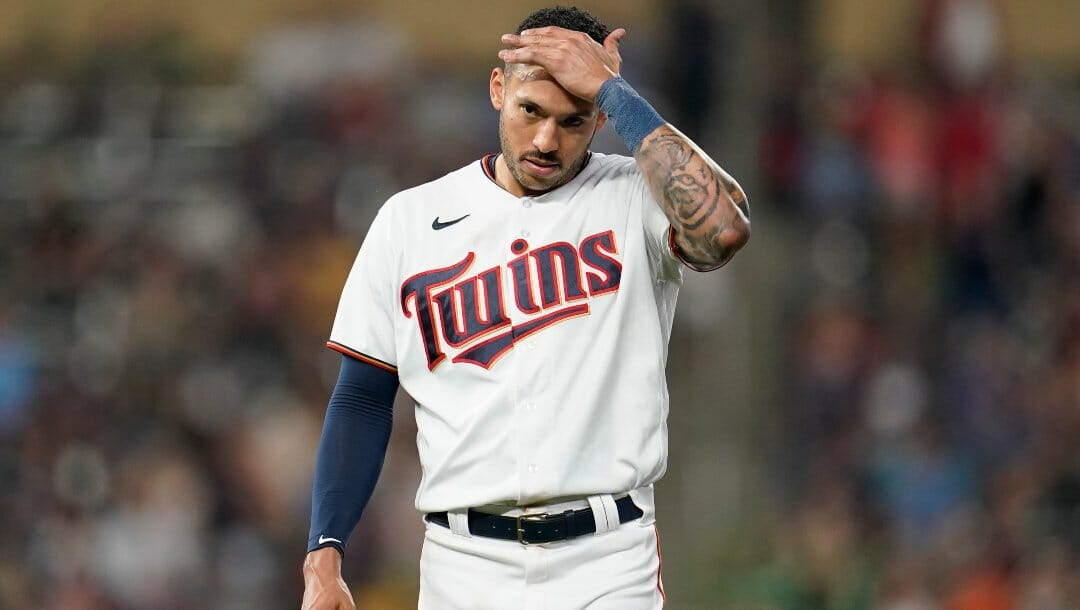 It seems like it was only yesterday that I was writing about Carlos Correa’s record-breaking deal with the San Francisco Giants — or was it the New York Mets? Wasn’t he already with the Minnesota Twins?

It can be tough to keep up.

After just one season with the Twins, Correa opted out of his three-year, $105.3 million contract to enter free agency on Nov. 2, 2022. During the 2022 regular season, the star shortstop batted .291 with an OPS of .833 and 22 home runs in 522 at-bats, proving himself worthy of the $35.1 million average annual salary he was pocketing. Still, his decision to opt out of the remaining two years and $70.2 million with the Twins wasn’t surprising.

Correa has made it abundantly clear that he wants to contend for a World Series title, and the Twins failed to even make the playoffs in 2022, despite leading the AL Central for a good chunk of the regular season. The 29-year-old was a part of the 2017 Houston Astros team that took home the title — albeit controversially — and it was a taste of victory he’s keen to get back.

Still, I’m guessing Correa didn’t expect his time as a free agent to be as chaotic as it has been over the last couple of months.

Entering free agency after the 2022 season, Correa was arguably the hottest shortstop on an infielder-heavy market. With rumors flying and reported interest from an extensive list of teams, the Giants agreed to terms on a massive 13-year, $350 million contract with Correa on Dec. 13, the largest ever secured by a shortstop in MLB history.

In the afternoon of Dec. 20, 2022, the Giants postponed their scheduled press conference, where they were expected to announce the acquisition of Correa. It soon leaked that an undisclosed issue with his medical examination meant things needed to be discussed further, and San Francisco fans reacted with anger and confusion.

Mere hours after the cancellation, Correa agreed to terms with the Mets on a 12-year, $315 million middle-of-the-night deal, sending heads spinning across the league. So what the hell had just happened?

Initially, a lot of fans assumed the Giants had simply gotten a bad case of cold feet. The agreed-upon contract was long and expensive — maybe the team realized they’d bitten off more than they could chew and needed an excuse to pull out.

A few days later, it was leaked that the Giants’ issue with Correa’s medical was regarding an injury to his lower right leg that he sustained in the minor leagues. Correa underwent surgery on his fibula and a ligament after he injured himself on a slide in June 2014 when he was 19 years old. He has never spent time on the injured list for a lower right leg injury since debuting in the major leagues, and his mobility has never been any public cause for concern.

The revelation of the deal-ending issue being a forgotten injury from nine years ago did nothing to stop the rumors that the Giants just got cold feet. San Francisco fans weren’t happy, and neither was Correa’s team. Still, now all sights were on New York, and even though his new contract wasn’t $350 million, Correa had secured $315 million, and that’s certainly nothing to scoff at.

Just three days after agreeing to terms with Correa, the Mets stopped in their tracks. They’d received the results of Correa’s physical and were concerned about — you guessed it — his lower right leg.

I can’t even imagine the self-control it took at that moment for the Giants not to post, “We told you so” across every social media platform.

Correa sent it to the 'pen pic.twitter.com/tUiSafzWKQ

There were few to no updates from either the Mets or Correa’s camp over the following few weeks, leaving fans wondering about the seriousness of the concern with the shortstop’s physical.

Would the 12-year, $315 million deal be restructured, perhaps with at least a few of the later years becoming options? Maybe the Mets would require an opt-out clause in case Correa misses too many games due to the mysterious issue with his lower right leg? When would this saga finally come to an end?

Well, apparently not quite yet.

On Jan. 10, Correa agreed to terms on a six-year, $200 million contract, pending physical, with the Minnesota Twins, closing the door on his move to New York and leaving fans across the league in a tizzy.

To be fair, the words “pending physical” have never done so much heavy lifting. Could Correa fail a third physical examination? It’s not off the table, but considering he’s returning to a team he was expected to still be playing for, I doubt he will have as many issues with the Twins as he did with the Giants and Mets.

The new deal is also substantially shorter than those he’d agreed to with the other teams, meaning longevity is less of a concern.

What Does It Really Mean to “Agree to Terms” in MLB?

Right now, Correa is still officially a free agent in that he still needs to sign on the dotted line with any team. He’s agreed to terms — three times — but what does that really mean?

When it comes down to it, agreeing to terms on a deal is little more than a handshake agreement. A team and a player have negotiated to a point where both parties are happy to sign, but they still have a few boxes to check — for example, the physical examination.

The agreed deal can still have legal ramifications if a party bails for no reason, but things can and do legitimately go wrong. Medical issues are revealed that cause deals to be completely restructured or fall apart, trades get interrupted by other teams, and negotiations can just be generally messy.

It’s not a done deal until there’s ink on the contract.

I’d argue that the public should probably hear a lot less about players agreeing to terms with teams. The large majority of the time, these deals are leaked to the press by agents who want the publicity of their clients lining up a big contract. Still, it’d certainly save a lot of stress and embarrassment if they held off until it was set in stone, because cases like Correa’s don’t do wonders for the reputation of anyone involved.

What Happens to Carlos Correa Now?

Despite all the rumors of negotiations stalling and frustrations building, I think that Correa’s new deal with the Twins will be the one that sticks. Perhaps I’m just exhausted trying to keep up with who’s agreeing to what with whom, but I simply refuse to believe this man can have three deals fall through in under a month.

Still, I’m surprised Correa has landed back in Minnesota.

He left the Twins for a reason, and it wasn’t financial. He already had $35.1 million confirmed for 2023 that he opted out of — his choice to enter free agency was about competition, and the Twins haven’t gotten any more likely to contend for a World Series since he left the team in November. So why did he just agree to return?

Considering how long this whole situation has dragged on, there’s a decent chance the Twins were simply the only team still in contention to sign him. Teams that were previously interested in the shortstop have now found other options to fulfill their infield needs, and rosters have slowly been locked down while Correa has been jumping through hoops. Perhaps he just didn’t have that much choice.

So will this be the deal that sticks? Only time will tell.