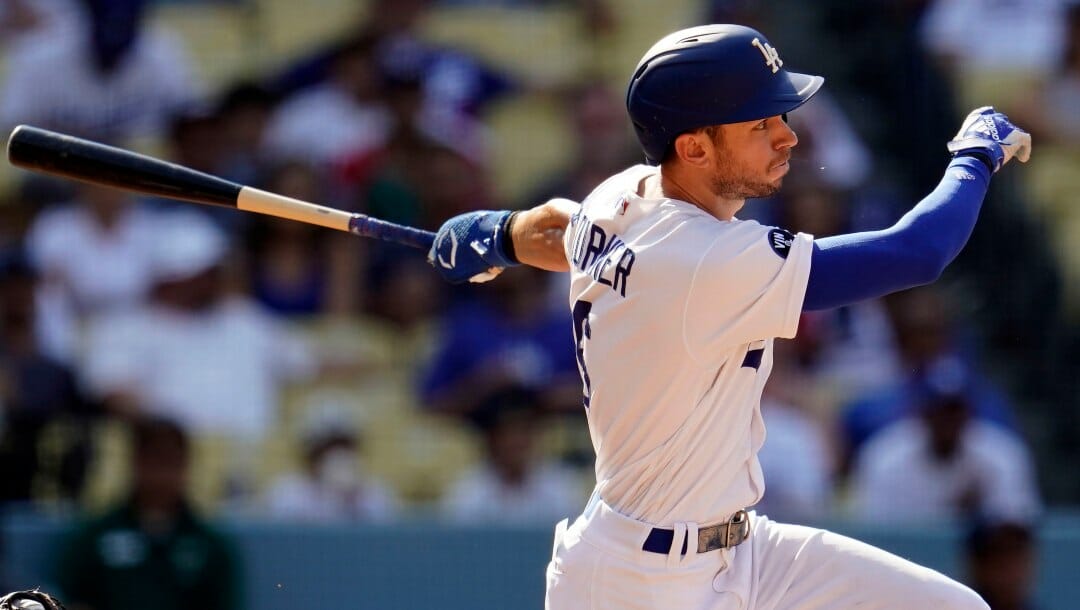 Whether he’s playing for the Washington Nationals or the Los Angeles Dodgers, Trea Turner has always been a fan favorite. The 29-year-old shortstop has been a star on the West Coast, playing a key role in the Dodgers’ success in the 2022 regular season, but where will he play next year?

Turner batted .298 with an OPS of .809 and 21 home runs through the regular season with the Dodgers. In the team’s four games against the San Diego Padres in the Division Series, which ended in the Dodgers being eliminated from the playoffs, Turner hit two home runs, on top of two doubles, and two singles.

There’s no doubt Turner is an immediate star on any team he plays for, so where could he be playing in 2023?

The Dodgers could extend Turner’s contract, and he could stay in Los Angeles for at least another season, but that option isn’t looking particularly likely.

Turner reportedly wasn’t particularly happy when he was initially traded from Washington to Los Angeles. Even though he seems to have settled in over the last season, he’s made it clear he misses the East Coast.

So why would he stay?

The Dodgers have an extensive list of payroll options they may decline this offseason, meaning the team will have money to play with if they want to keep Turner. But even outside of money, Los Angeles has a lot to bargain with.

The team ended the 2022 regular season with an incredible record of 111-51, so perhaps continuing to be a part of a winning team will be enough to keep Turner.

The 2022 season ended abruptly for the Dodgers when they unexpectedly lost to the San Diego Padres in the Division Series, so perhaps Turner and the other stars of Los Angeles believe they have some unfinished business.

Will that be enough to keep the shortstop on the team? Only time will tell.

Turner has said he wants to return to the East Coast, and the Phillies will likely want to help make that dream come true.

Philadelphia’s payroll is currently the highest it has ever been, so their ability to sign Turner is likely to depend on them declining $32 million worth of options on Jean Segura and Zach Eflin this offseason.

The Phillies’ current shortstop is rookie Bryson Stott, who will almost certainly be a part of the team’s future considering his impressive debut year in the majors. On top of 83 games at shortstop, Stott played 47 games at second base during the 2022 regular season, so if that shift can be a permanent arrangement for the Phillies, the team is free to sign Turner to play shortstop.

So, could Turner reunite with his old Nationals teammate Bryce Harper in Philadelphia? Fingers crossed.

The Cubs are on a mission to rebuild, and signing a player like Turner would definitely move that along at a faster pace.

Chicago is obviously not on the East Coast, but there’s reportedly mutual interest between the two parties. If the Cubs can sell Turner on their vision and plan to get back into contention, perhaps the shortstop will be headed to the Midwest.

The Cubs’ current shortstop is Nico Hoerner, and he is widely considered by fans and players to be the future of the team.

If Turner were to move to Chicago, one of the two would have to move to second base, which is unlikely to be a major issue for either player. Turner played second base when he was first traded to the Dodgers, and Hoerner has second base as his secondary position.

I see the biggest issue for the Cubs being convincing Turner they will be a contending team in the next season or two. The team’s rebuild is still very much underway, and even though they showed some promise in the second half of the 2022 regular season, it’s likely to be at least another year before the Cubs are a top contender again.

In 2022, the Yankees had a great first half of the regular season, a mediocre second half, and a very underwhelming postseason.

The team admittedly has plenty of question marks with their roster for next season — including the potential exit of star outfielder Aaron Judge — but replacing Isiah Kiner-Falefa with a stronger shortstop is likely to be a serious discussion.

There is rarely a big trade or acquisition happening where the Yankees don’t want to be a part of the conversation.

With a few big players looking like they’ll exit the club during the offseason, the team will need to acquire new stars to stay in contention, and Turner would be a great place to start.

The Yankees currently have a very expensive payroll — and there will be even less to spend if they decide Judge is worth more than the $213.5 million he turned down at spring training — but when it comes to New York and finances, where there’s a will, there’s a way.

I personally think the Yankees are more of a long shot to acquire Turner than some of the other options, but it isn’t off the table.

Throughout the entire season, you can bet on MLB odds during games. From the first pitch through the final innings, updated odds are available, including over/under totals, run lines, and moneylines.

Check out the live betting page to get closer to the diamond!