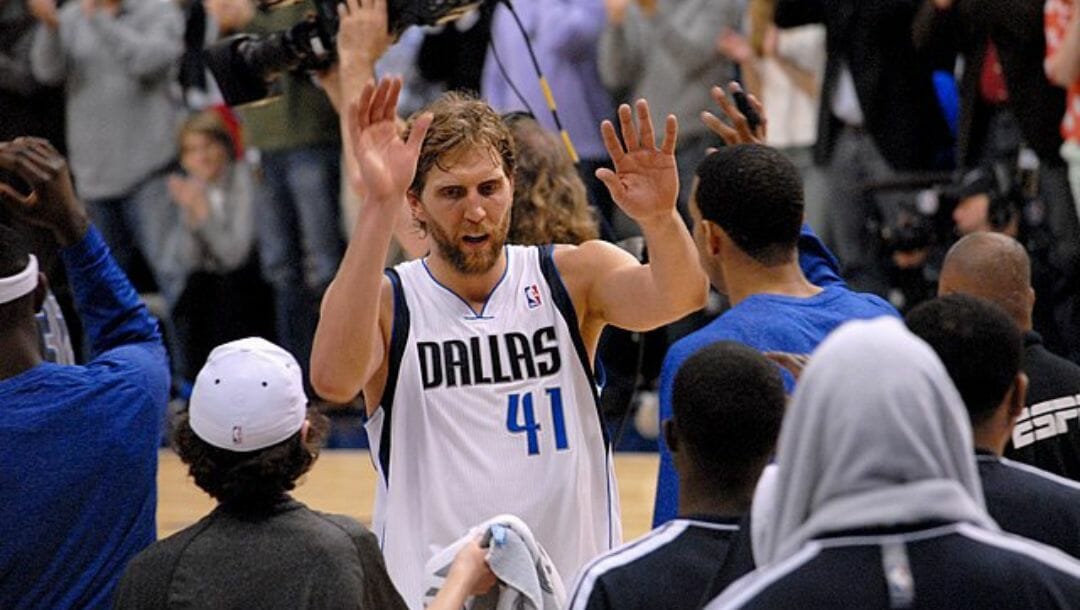 Favorites in the NBA Finals odds are not always guaranteed to win the championship, despite oddsmakers giving them an edge and bettors placing their bets on them. Sometimes, underdogs are defying the odds against them to score an upset to the favored team.

The perfect example was the 2021 NBA Finals, where the Phoenix Suns were the ideal choice in the NBA odds against the Eastern Conference Champions Milwaukee Bucks. Phoenix, led by Chris Paul and Devin Booker, even raced to a 2-0 series lead, but Giannis Antetokounmpo and co. have managed to win four straight wins to capture the franchise’s second title.

Besides the Bucks’ come-from-behind upset of the higher-seeded Suns team, we listed the top five NBA Finals upsets of all-time.

Miami’s first year with the ”Heatles” of LeBron James, Dwayne Wade and Chris Bosh has expected them to bring a title immediately to South Beach. They managed to grab second place in the Eastern Conference and only lost three games in the playoffs on the way to the NBA Finals.

In the finale, they met with the Dirk Nowitzki-led Dallas Mavericks, who were the underdogs against the big three of Miami. The Mavs were down 2-1 through three games, but Nowitzki got some valuable help from Jason Terry and Shawn Marion in the next three games to spoil the first year of the Heat’s super team and eventually win the franchise’s first NBA title.

On paper, the 2003-04 Los Angeles Lakers were the clear favorite to win the title that year as superstars Karl Malone and Gary Payton joined the team in their quest to win their first NBA ring. However, they were rudely defeated by the tough Detroit Pistons team led by Chauncy Billups, Richard Hamilton and Ben Wallace.

Heading into the 2004 Finals, many had counted the #Pistons out.

Watch @FearTheFro break down how The Best Five Alive proved everyone wrong when they brought home the 2004 @NBA Championship and ultimately changed the game.#NoBrakes | #21HoopClass | #NBAHOF pic.twitter.com/Sz9lgjZEaW

The third-seeded Eastern Conference Pistons team has dismantled the Lakers team in five games, with Los Angeles only winning the second game via overtime. Aside from Detroit outplaying the Western Conference champions, another factor that led to this enormous upset is the turmoil within the Lakers’ locker room that eventually led to the fallout of the team in the following season.

Golden State’s arrival as the NBA’s newest dynasty officially began when they captured the NBA title in 2015. Then in the following season, they broke the record for the most wins by a team in the regular season with a 73-9 record. This has made them a favorite to win the championship for the second-straight season.

However, that dream was crushed when LeBron James and Kyrie Irving spearheaded the 3-1 series deficit comeback of the Cleveland Cavaliers during the 2016 NBA Finals. After dropping to a 3-1 hole, many thought the series was over, but the two superstars above single-handedly turned the tide to their favor and got the title with a 4-3 victory.

After Wilt Chamberlain transferred to the Los Angeles Lakers in the 1968-69 season, he formed a trio of stars alongside Jerry West and Elgin Baylor. The team secured the best record in the Western Conference and went all the way to the NBA Finals to face the defending champions Boston Celtics.

It would be Bill Russell's final game as a player.

Russell's 11 titles as a player are still the most in NBA history, and tied with Henri Richard for the most in MLB/NBA/NFL/NHL history. pic.twitter.com/ujcbv6e9AD

Despite being the defending champions, Boston was the underdog in the series due to the loaded star power that Los Angeles possesses. Additionally, Bill Russell was in the tail-end of his playing career. But, the Celtics were able to push the series to seven games and eked out the final game to bag the NBA title and upset the super team of the Lakers.

The 1995 NBA Finals matchup between the Houston Rockets and the Orlando Magic was a battle of youth and experience. The tandem of rising stars Penny Hardaway and Shaquille O’Neal collided with Hakeem Olajuwon and Clyde Drexler to determine the NBA champion.

The Rockets went on to sweep the series to claim their 2nd straight NBA Championship. pic.twitter.com/KbeAE1kYfH

Even after winning the championship from the previous season, the Rockets were the underdog coming into the series due to their lackluster ranking in the playoffs as the sixth-seeded team in the Western Conference. Another factor was the ascent of the Hardaway-O’Neal duo, who eliminated the Chicago Bulls in the second round. In the end, Olajuwon dominated the finals with his double-double average of 32.8 points and 11.5 rebounds to sweep the Magic and collect their back-to-back NBA titles.