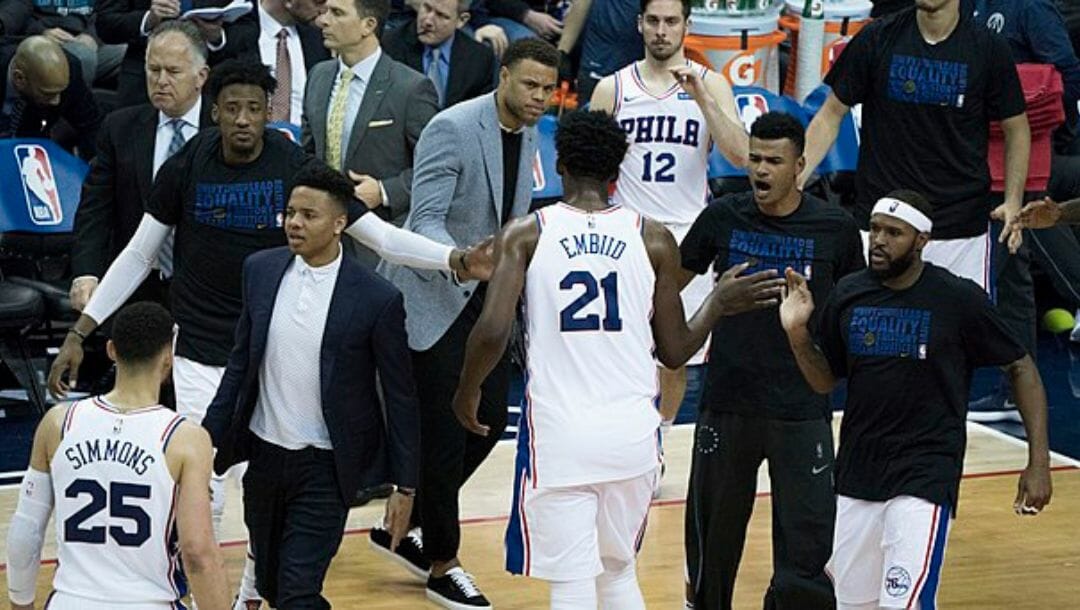 A losing streak in the NBA, particularly on this list, can be attributed to two reasons: a rebuilding team with young players and the departure of their superstar through trade or free agency.

Regardless of the reason, a prolonged drought is still an embarrassment to a franchise and a major blow to their NBA championship odds. The most recent losing streak recorded was the 20 straight losses of the Houston Rockets in the 2020-21 season after they traded away James Harden to Brooklyn.

But that 20-straight game loss of the Rockets is not the worst in history and tied for the 7th spot with two other teams. Here’s a list of the six most extended regular-season losing streaks by an NBA team.

Before the start of the 2015-16 season, the Philadelphia 76ers lost their last ten games of that year, then at the beginning of the 2016-17 season, they lost their first 18 games, which accumulated the longest NBA losing streak of 28 games.

Philadelphia, who were rebuilding at that time, finally got a win over the Los Angeles Lakers, 103-91, to snap the dry spell on December 1, 2015. However, they only managed to win ten games throughout that regular season and became the league’s worst team with 72 losses.

After LeBron James departed for his quest to win his first title, the Cleveland Cavaliers became an instant mediocre team in the 2010-11 season. This produced the second-longest NBA losing streak by a team with 26 straight losses. It began from December 2010 to February 9, 2011.

The 2010-11 Cavs season was my first year covering the NBA. It was also the first year without LeBron. The 26-game losing streak, the Baron trade and the win over Miami… It had it all.

Coming next week, a cool project documenting that season I’ve been working on. Stay tuned.

A victory against the Los Angeles Clippers on February 11, 2011, avoided an extended string of defeats, but still, they finished dead last in the Eastern Conference standings with 19 wins and 63 losses. Nonetheless, this forgettable year paved the way for them to draft Kyrie Irving as the top overall pick in the 2011 NBA Draft.

Tied with the Cavaliers for the second-longest losing streak in NBA history with 26 straight losses is the Philadelphia 76ers. In the 2013-14 season, they never picked up a victory from January 29 to March 27, 2014.

A 25-point victory over the Detroit Pistons halted the skid on March 29, 2014, saving them from a further slide in the standings. Eventually, they ended the year with 19 wins and 63 losses, thus avoiding a last-place finish in the Eastern Conference as Milwaukee won 15 games of their own.

Before setting the franchise-worse losing streak in 2011, the Cavaliers experienced a 24-game losing streak spanning two seasons. They lost 19 straight games during the 1981-82 season, then opened the following season on a five-game skid which extended their win drought.

The Cavs finally ended the losing streak when they outlasted Golden State in their sixth game of the season with an overtime victory.

A shortened regular season in 2011-12 due to a lockout saw the Charlotte Bobcats only win seven games in the regular season, including a 23-game losing streak which began from March 19 up to their last contest on April 26, 2014, against the New York Knicks.

The duo of Gerald Henderson and Corey Maggette was not enough to salvage their tanking season. Thus, Kemba Walker was just a rookie at that time and was freshly picked out of Connecticut as the number nine pick in the draft.

Joining Charlotte in the 23-game losing streak is the Denver Nuggets, who also had a similar drought in the 1997-98 season after failing to win a game from December 9, 1997, until January 23, 1998. The Nuggets also registered the lowest wins with only 11 victories and absorbed 71 losses.

Additionally, they were second to last in terms of offensive rating, last in defensive rating and last in the net rating, which ultimately caused the losing season and the worst record of an NBA team.

Another team that experienced a 23-game skid is the Vancouver Grizzlies in the 1995-96 season when they first joined the NBA as the latest expansion team. They had a tough first year in the league as they finished dead last in the overall regular-season standings with only 15 wins and 67 losses.

The pair of Greg Anthony and Bryant Reeves was the initial foundation of the franchise, but still not enough to impress in their maiden stint in the NBA. They started the losing streak on February 16, 1996, until April 2, 1996, before finally breaking it with a win over Minnesota on April 3, 1996.

This tough stretch carried over to the start of their new campaign in 1979-80 as they suffered seven more defeats at the hands of Washington, Indiana, New Jersey, Cleveland, San Antonio, Atlanta, and Philadelphia. The team finally picked up a win over the Houston Rockets on October 25, 1980, to stop the losing run.

Dallas had a rough opening season in 1993, as they only got one win in four games. It was only a prelude of what would unfold as the Mavs suffered their worst losing streak in team history when they went winless in 20 straight games.

Even before the 2020-21 season commenced, the media and the fans expected that the Houston Rockets would be a cellar-dweller team due to its rebuilding process and a tanking strategy to try and nab a top prospect in the draft.

During the tail-end of the 1993-94 season, the Los Angeles Clippers lost its last four games to Golden State, Denver, Phoenix, and San Antonio to finish the year with a 27-55 record. Then, the following season, they had an awful start, dropping 16 straight games to drag their losing streak to 20 across two seasons.

They finally stopped this skid with a 96-94 overtime victory over the Milwaukee Bucks on December 7, 1994; however, it was also a forgettable season because they were only able to tally 17 wins and suffered 65 losses which placed them dead last in the standings.

Another NBA team who experienced a 20-game consecutive loss is the New York Knicks, who sustained this during the 1984-85 and 1985-86 seasons. The struggle began in the latter stages of the season as they experienced 12 straight defeats and finished the season with a lowly 24-58 record.

Despite drafting Patrick Ewing in the NBA Draft, this dry spell carried on at the beginning of the 1985-86 season when they received eight more losses to kick off the year. It placed them on the wrong side of the history books by tying the 10th-longest losing streak in league history.

Joining the Clippers and the Knicks with 20 consecutive losses is the Philadelphia 76ers, who encountered the same fate during the 1972-73 season. Unlike the two teams mentioned above, the Sixers suffered this unfortunate stretch in only one season. This started with a blowout loss to the Chicago Bulls on January 9, 1973.

It lasted for over a month when the Clippers handed them a 108-90 beating on February 11, 1973. Fortunately, they broke the losing skid by eking out a close win over the Bucks on February 14, 1973. But that season, they only managed to win nine games throughout the season, setting a record for the worst record in NBA history.