NFC South Playoff Picture: Who Will Be King of the Dumpster Fire? 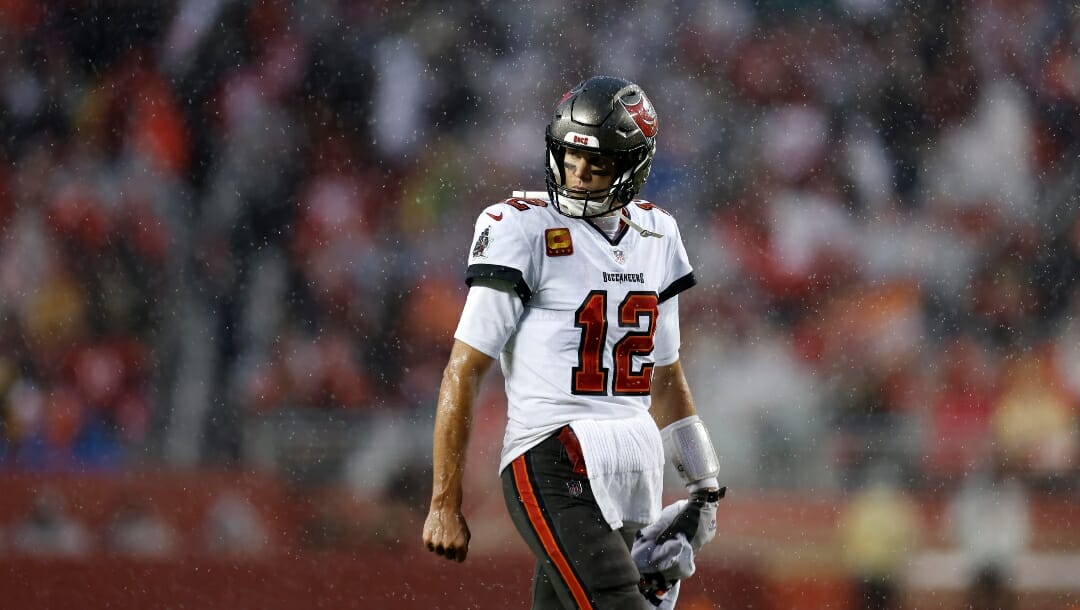 The Buccaneers were down by 13 points with less than five minutes remaining, their NFL odds to make the playoffs seemingly evaporating with every failed drive.

But Tom Brady was behind center. Tampa Bay would be just fine.

Late in the fourth quarter in a game against the Saints earlier this month, Brady and the Buccaneers compiled a 10-play, 91-yard drive that lasted less than three minutes. Then they forced the Saints to go three-and-out. And the inevitable ensued.

With just six seconds remaining at New Orleans’ 6-yard line, Brady caught a shotgun snap and patiently stood tall as if time were inconsequential. He zipped a pass to Rachaad White, who did the rest and delivered the Bucs the points they needed to go ahead, win, reach .500 and cement a lead in the division.

A week later, the Bucs were vanquished by the 49ers, who won 35-7 as their third-string quarterback, Brock Purdy, outperformed Brady.

No one in the NFC South has a winning record. Will anyone ever emerge from this dumpster fire division?

The Buccaneers, at 6-7 overall at 3-1 in the division, are still the football odds favorites to win the NFC South at -350. Despite having a solid chance to win their division, they have the 10th-best Super Bowl odds at +3000.

The NFC South has a chance to lose the most games by a collective division in the last 20 years.

Considering four NFC South clashes are scheduled for the remainder of the season, that’s not impossible.

But even if the winner of the NFC South has a losing record, that doesn’t automatically equate to doom.

Five teams have qualified for the NFL playoffs with losing records, and they’re 2-3 in their first-round matchups. The 2014 Panthers are the last team to win a playoff game following a losing record in the regular season.

If the Buccaneers finish the 2022 regular season with a losing record, that will be the first time Tom Brady’s ever had a sub-.500 record during a season in which he started.

Brady doesn’t deserve all of the blame. But he shoulders a great deal of it.

At 45 years old, Brady is averaging 275.8 yards per game and is completing 65.8% of his passes, numbers which are in the top half compared to other seasons he’s played.

But it isn’t amounting to much. His touchdown percentage (2.9%) is the lowest for any season in his career where he’s played more than one game, as is his 6.2 yards per attempt. His 0.9% interception rate is bottom five. The number of first downs he’s thrown for will likely be in the bottom half.

In 2021 when he led the league in passing, Brady’s average intended air yards was eight, and his average completed air yards was 5.5. Those numbers are 7.2 and 4.6, respectively, this season.

Walking off a winner for the 249th time. @TomBrady pic.twitter.com/gQtgx7nnOn

His team’s defense has certainly taken a step back. Tampa Bay is 11th in total DVOA, per Football Outsiders, compared to ninth last season. When it comes to stopping the run, the Buccaneers were fifth in adjusted line yards last season but are 12th this year.

The Bengals this week won’t be easy, but then they take on the Cardinals, Panthers and Falcons. All three of those last teams who the Bucs close the season with have made changes at quarterback in recent weeks.

Maybe the Buccaneers pull off a winning season after all.

Has an Interim Coach Led a Team to the Playoffs?

History says an interim head coach taking a team to the playoffs is possible but unlikely. The Panthers might be an exception.

Since 1960, only three interim head coaches have reached the postseason. One of them was last year when Rich Bisaccia took over for the Raiders, who lost in the opening round.

Steve Wilks, former Cardinals head coach, has been the interim head coach for the Panthers since Matt Rhule following Week 5. And the Panthers are just one game behind the Buccaneers for the NFC South lead.

The Panthers don’t have a bad shot at securing that divisional crown, either. They’ve already defeated the Bucs earlier this season — pretty handily at that — and get to face them again for a chance to take a tiebreaker.

The Panthers have a losing record for a reason, though. They’re 29th in total offensive DVOA and have made several changes at quarterback. But the formula they’ve found in recent weeks might be enough.

They’re 13th in rushing offense DVOA. In their last two games, they’ve rushed for a combined 408 yards against the Seahawks and Broncos.

And as surprising as this may sound, Sam Darnold has been steady at quarterback. He’s thrown for 284 yards and two touchdowns in two games, but he also hasn’t thrown a pick, which Baker Mayfield and PJ Walker both did.

Ultimately, their defense must be as strong as it has been in order for the Panthers to keep winning.

In the last two weeks, the Panthers are third in total defensive DVOA and first against the run. Brian Burns has also been explosive and helpful in limiting opposing passing attacks, as he’s second in hurries (39), tied for third in total pressures (59) and has 11 sacks.

Running the ball and stopping the run have been fairly dependable methods of winning late in seasons. But with the Steelers, Lions, Buccaneers and Saints all on the schedule, the path to the postseason won’t be easy.

Even this late in the season, so much uncertainty surrounds the Falcons.

Marcus Mariota hasn’t been stellar, throwing for 2,219 yards, 15 touchdowns and nine picks on a 61.3% completion rate to go with 438 yards and four touchdowns on the ground. He’s second in the NFL in average intended air yards and seventh in aggressiveness, according to Next Gen Stats. But it’s resulted in the Falcons being just 16th in passing offense DVOA.

Mariota was put on injured reserve this week, meaning Desmond Ridder will start.

Ridder has yet to throw a pass in the NFL. He’s a third-round rookie out of Cincinnati. But his potential might unlock new aspects of the Falcons offense.

The @AtlantaFalcons take a late lead! 😱

The Falcons have struggled getting some of their best players involved. First-round rookie wide receiver Drake London leads the team with 533 receiving yards, but he’s caught just 47 passes on 81 targets. Tight end Kyle Pitts was also an afterthought until he endured a season-ending knee injury.

Atlanta has been one of the best rushing teams in the league, ranking sixth in DVOA. Four Falcons have run for at least 350 yards.

Their defense, though, has been lackluster. They rank 30th in total defensive DVOA and haven’t shown much promise of improving drastically.

With the Saints, Ravens, Cardinals and Bucs yet to play, Ridder and the Falcons’ offense might not even be what holds them back. It could be the other side of the ball.

The Saints have a 1% chance of making the playoffs, according to the New York Times. And that number drops to zero if they fall in either of their two remaining NFC South games.

The Saints haven’t been strong in many areas this year. They’re in the bottom half of the league for total, rushing and passing offense DVOA as well as rushing defense DVOA. Their bright spot has been their passing defense, where they’re 12th.

The Saints have been feisty, but so much has gone wrong for them. Seven Day 1 starters were not in the starting lineup for them last week.

Those absences have created critical domino effects. When offensive lineman Erik McCoy went down with an injury, that derailed the Saints’ rushing attack. Alvin Kamara hasn’t run for more than 50 yards in five weeks.

Whether it was Jameis Winston or Andy Dalton behind center, the Saints’ passing offense seemed promising at the start of the season. But then Michael Thomas’ foot injury allowed opposing defenses to focus more on rookie star Chris Olave, who’s averaged 65.3 yards in his last six games after totaling 82.5 in his first six appearances.

Maybe the Saints make some adjustments in the offseason. With the Falcons, Browns, Eagles and Panthers still on their schedule, New Orleans may as well look forward to 2023.

Betting on NFL odds is a unique way to take your football entertainment to the next level.

Whether you’re a first-time bettor checking out moneylines for Sunday Night Football and Monday Night Football, a casual fan building parlays with the Kansas City Chiefs and Green Bay Packers, or a longtime diehard breaking down football betting trends, there’s something for everyone.