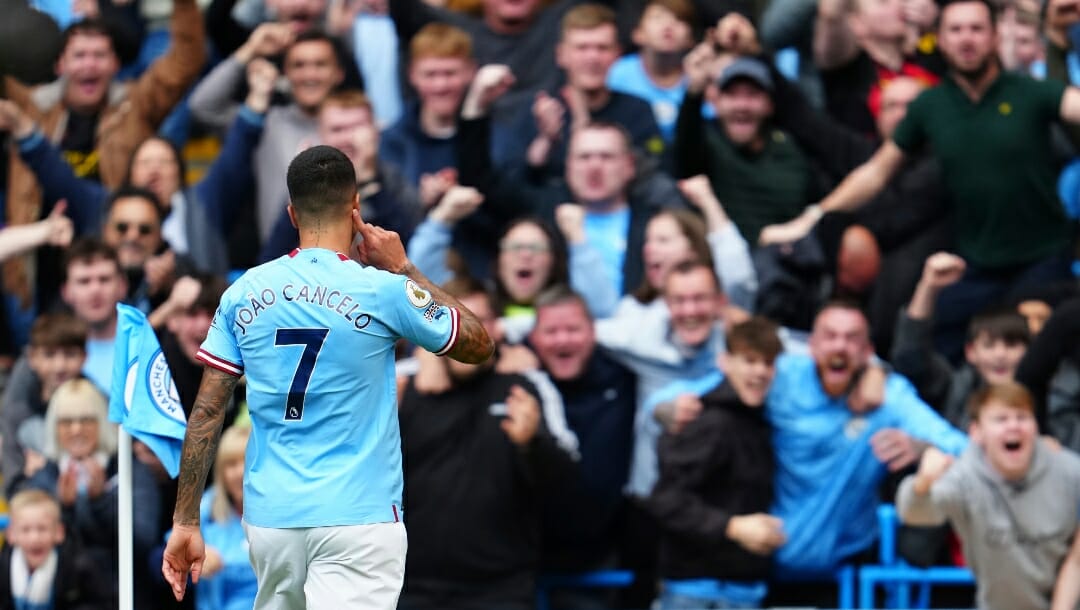 Erling Haaland scored in his seventh straight Premier League contest, but was it enough to maintain his position atop the EPL power rankings heading into Matchday 11?

Despite Arsenal leading by a point atop the table, Premier League odds have Manchester City as the staggering favorites (-625) to retain the title. Pep Guardiola’s side already has a +24 goal differential, 11 better than the first-place Gunners.

That goal differential should be good for a bonus point come season’s end, as it’s unlikely any team – even at this early stage of the season – will overturn City’s heaping advantage.

For the first time this season, three Manchester City players cracked the top-five list in the same week. Three newcomers also infiltrated the rankings, one each from Newcastle, Arsenal, and Manchester City.

Bruno Guimaraes isn’t a household name if you’re not living in Tyneside. In 2021-22, his first season at Newcastle, he scored five goals and added a helper in 17 Premier League appearances.

Guimaraes broke out for a brace against Brentford in Newcastle’s 5-1 win. He bagged the opening goal off a nifty header and followed it up by bagging a precise 56th-minute long-range effort.

The 24-year-old was also influential in other facets, creating scoring opportunities for his colleagues and wreaking havoc all afternoon.

Ethan Pinnock’s 90th-minute own goal was created by Guimaraes’ whipped cross. The central defender couldn’t deal with the pace and swerve of Guimaraes’ delivery, inadvertently knocking it into his net.

Guimaraes missed three games due to a minor hamstring injury earlier in the season. Newcastle couldn’t secure a victory during his absence, highlighting his irreplaceable importance to the side.

Phil Foden backed up his Matchday 9 hat trick with another outstanding performance against Southampton on Matchday 10. He scored a goal – his sixth in nine appearances – and added an assist.

Foden has five goals in his last three matches, 38% of City’s overall goal total in that span. Foden is tied with Roberto Firmino for third place on the top goalscorers list, just two behind Harry Kane.

He has 0.82 goals per 90 minutes, the league’s fourth-best rate. In addition, Foden has four assists, tied for the second most with Bernardo Silva and Bukayo Saka. Only teammate Kevin De Bruyne, who has an astonishing nine helpers, has more.

If he continues his current trajectory, Foden will bag about 24 goals. To put that into context, last season’s joint Golden Boot winners – Son Heung-min and Mo Salah – scored 23.

Erling Haaland had enough chances to score his fourth successive Premier League home hat trick but was a bit unlucky in front of the goal. One strike was hit sweetly but came back off the post.

However, Haaland scored in his seventh straight Premier League match, a run in which he has 13 goals. Haaland has 15 goals in nine top-flight games, seven ahead of second-place Kane.

The Norwegian sits atop almost every offensive category aside from assists, which teammate De Bruyne leads. He has 1.80 goals per 90 minutes, 2.16 goals and assists per 90 minutes, and 9.0 xG.

His xG total highlights just how ruthless the all-around marvel is when he gets a sniff.

Both on the same wavelength! 📡@ErlingHaaland with his 15th @premierleague goal of the season so far 👏#ManCity pic.twitter.com/eXekATLPMR

Bukayo Saka has been threatening to infiltrate the top-five list for a few weeks and put in a performance against Liverpool worthy of his No. 2 position.

Saka caused Virgil van Dijk and Konstantinos Tsimikas fits, making the most of his breakneck pace and snappy trickery.

The 21-year-old scored on the cusp of halftime to give Arsenal the advantage heading into the interval and slotted home the all-important winner from the spot with just 14 minutes remaining.

Saka has four goals and three assists in nine appearances and is instrumental to Arsenal’s electric start. The Gunners have lost just one of nine matches and find themselves a point clear atop the table.

Joao Cancelo is indisputably the best left-back in the world. The Portuguese can play anywhere on the pitch, including in the heart of midfield.

A generational talent devoid of weaknesses, Cancelo showcased his superiority in Manchester City’s 4-0 whitewash of Southampton. He started the scoring with superb skill and a silky smooth finish.

Cancelo then played provider on Haaland’s 65th-minute goal, knocking a picture-perfect fizzed low cross into the dominant Norwegian’s stride. Cancelo’s interplay is exquisite. He can slow the pace or pick it up seemingly instantly.

The 28-year-old has two goals and an assist in nine Premier League appearances, with four assists in three Champions League affairs.

Our Move of the Match! 🙌

Silky skills from #Cancelo to provide us with our opener! 💫#ManCity | @Sure pic.twitter.com/oUPTNzGfRv