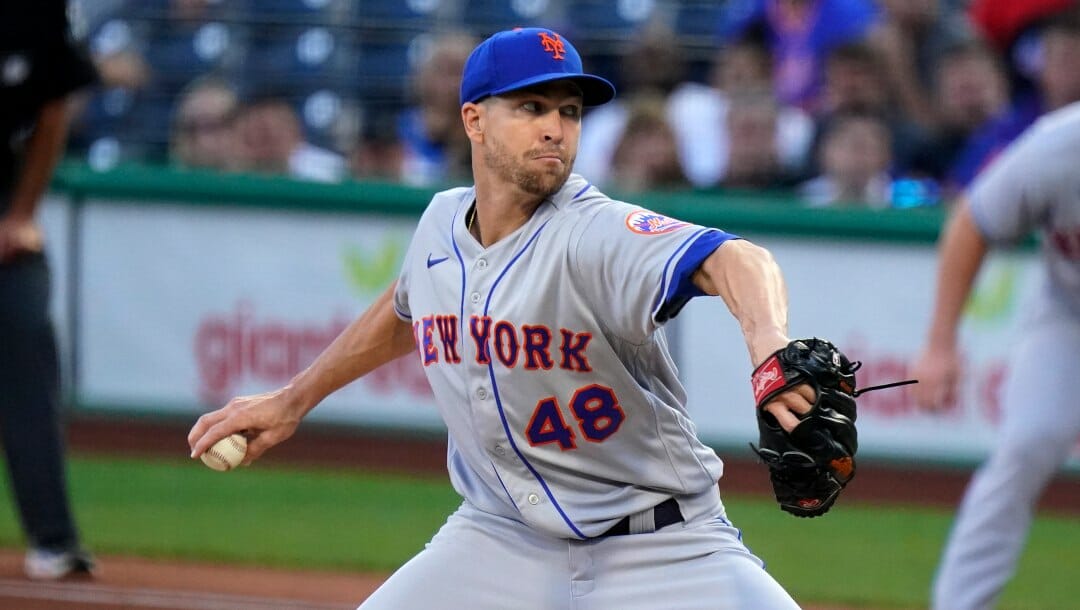 After nine incredible seasons with the New York Mets, ace pitcher Jacob deGrom has opted out of his contract for the 2023 season. The 34-year-old will now enter free agency alongside Aaron Judge and a host of other top players, and there is unlikely to be any shortage of teams looking to add the pitcher to their roster.

The Mets are the only organization deGrom has ever played for, so as much as rumors of his opting out had been swirling for a while, it’s a bit jarring that he will actually be moving on.

Over his regular-season career with the Mets, deGrom went 82-57 with a 2.52 ERA and 1,607 strikeouts in 1,326 innings pitched. Despite solid numbers, relatively recent injury issues — including elbow inflammation and a stress reaction in his right scapula that caused him to miss the end of the 2021 season and the start of 2022 — may see some teams pause before signing him to a long-term contract.

Regardless, it’s undeniable that when deGrom is healthy, he’s fierce.

After rehabbing in the minors at the start of 2022, he returned to the Mets’ roster on Aug. 2 and went 5-4 with an ERA of 3.08 and 102 strikeouts through the remainder of the regular season. His only start in the playoffs was against the Padres in the Wild Card Series, where he managed eight strikeouts in six innings pitched to record the Mets’ only win before being eliminated.

🎥 Jacob deGrom on his future: pic.twitter.com/4DHRYdit6g

So now that deGrom is officially heading to free agency, where could he end up playing in 2023?

There’s rarely a big free agent on the market that the Dodgers don’t want to sit down and talk with, but this match actually makes a lot of sense. In 2022, Los Angeles had an amazing regular season followed by an unexpectedly-short postseason. If the Dodgers want to go all the way next year, bolstering their pitching rotation is exactly where they need to start.

With Walker Buehler sidelined until 2024 after having a second Tommy John surgery and a flexor tendon repair in June, and Clayton Kershaw, Andrew Hearney, and Tyler Anderson all now free agents, the Dodgers need to add a few strong arms to the roster.

Only Tony Gonsolin, Julio Urías, and Dustin May remain in the starting rotation, leaving at least two spots open, and it’s difficult to deny that deGrom would fit in perfectly.

Personally, I think the Dodgers are the most likely contender to sign deGrom.

They’ve freed up a lot of payroll space this offseason, though they certainly aren’t scared of spending money. The Dodgers aren’t interested in another fantastic season ending in an abrupt exit — they have something to prove in 2023. Maybe deGrom is exactly what they’re looking for.

Could deGrom stay in the Big Apple? It’s always a bit controversial to move to a city’s rival team, but the Yankees may be interested in the starter, and if they don’t re-sign outfielder Aaron Judge, they may have some payroll space they’re looking to spend.

The Yankees’ offensive lineup is pretty amazing — even if sometimes it feels like they’re more interested in playing Home Run Derby than actual baseball — and their pitching staff isn’t too far behind. Gerrit Cole, Luis Severino, and Nestor Cortés all had extremely impressive seasons in 2022, but an arm like deGrom’s certainly wouldn’t hurt to round out the starting rotation.

After getting knocked out of the playoffs by the Houston Astros in the ALCS, the Yankees want to get back on top in 2023. The team’s No. 1 priority will be getting Judge to return, but if they don’t manage that, all bets are off.

The Yankees will be looking for new stars, and perhaps deGrom will find himself a new home without moving cities.

The Padres made a lot of noise at the 2022 trade deadline when they essentially cleared out their farm system to acquire Juan Soto, Josh Bell, and Brandon Drury. But of those three, only Soto will remain on their books next season. Pitchers Mike Clevinger and Sean Manaea are heading to free agency as well, so more than $50 million in payroll will be freed up this offseason.

If you were looking for a good Mets omen, Jacob deGrom just provided it. He buzzed through the Padres on 12 pitches in the first inning, striking out Juan Soto on a 102-mph fastball (and also making him fall down on a swing.)

GM A.J. Preller has very publicly declared his goal of taking the Padres to the World Series, and his actions prove he’s serious. He likes big stars on his roster and he’s not afraid of spending money to get them. Could deGrom be his next big get? It’s not out of the question.