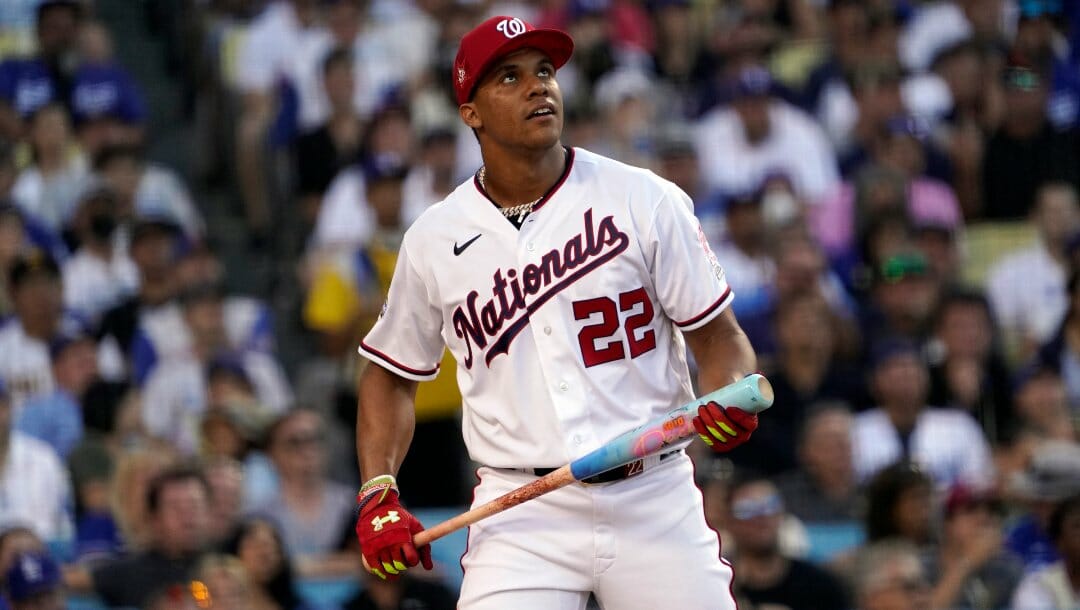 Juan Soto made headlines last week when he turned down a 15-year, $440 million contract extension from the Washington Nationals.

With only weeks left before the August 2 Trade Deadline, the Nationals stated they would begin entertaining trade offers for the 23-year-old, and it soon became clear there was no shortage of teams looking to boost their World Series odds by acquiring the premier outfielder.

The Nationals have said they won’t agree to a trade unless it positively impacts their organization, and I highly doubt they’ll have any issues seeing that threshold met. Soto has 2.5 years of club control left on his contract, and some top teams across the league are already scrambling to put together attractive offers, even if it’s just for that remaining time.

If the Nationals don’t hear a trade offer they like, or simply decide they’d rather keep Soto, they can always make an increased extension offer and see what he says, but it’ll have to be big.

Having just won the Home Run Derby and competed in his second All-Star Game, Soto knows his trade value is extremely high. I doubt he’s going to tie the rest of his career to the Nationals, who are currently dead last in baseball with a record of 31-63, without it being an offer he can’t refuse. And I don’t know if Washington is ready to sign a $500 million-plus contract.

As the postseason creeps closer and online sports betting continues to heat up, the destination of Soto for the remainder of 2022 is at the top of everyone’s mind.

So who are the likely candidates to compete for the outfielder in high demand?

It’s no wonder the Yankees are reportedly keen to get their hands on Soto, especially since Judge looks to be entering free agency at the end of the season. If they acquire Soto and keep Judge, the outfield is unstoppable. If they acquire Soto and don’t keep Judge, that’s still one hell of a replacement. There’s no doubt in my mind that the Yankees will be jumping at this opportunity, even if it will mean having an extremely expensive outfield.

The Yankees are coming out of the All-Star Break with a record of 64-28 and World Series odds of +325. They are the favorites to win it all and are even contenders to be not only the best team in Yankees history, but MLB history, too. The team is loaded with talent, and they’re very interested in keeping it that way, so Soto would be a fantastic addition.

In order to get Soto, the Yankees are likely to offer second baseman Gleyber Torres, supported by a combination of top prospects like shortstop Anthony Volpe, pitcher Ken Waldichuk, and outfielder Jasson Domínguez. I’ve heard rumors that pitcher Nestor Cortes could also be on offer, but I doubt the Yankees will want to part with the first-time All-Star unless it’s a last resort.

🎥 #Yankees and #Mets players sound off on the possibility of acquiring superstar Juan Soto pic.twitter.com/47It0xOP1m

Soto put on an impressive show at Dodger Stadium this week, winning the Home Run Derby on Monday and returning to play in the All-Star Game on Tuesday. It’s no wonder he made a few fans — some even chanting “Future Dodger” as he played in the outfield.

The Dodgers are currently leading the NL West with a record of 60-30 and have World Series odds of +375. Now planning for the postseason, the team will be looking to bolster its roster to take on the Yankees, as well as any other team that stands in their way, before the Trade Deadline. They’d be crazy not to have a go at acquiring Soto.

The most likely trade package from the Dodgers would include a few of their top prospects. Pitcher Bobby Miller could find his name in the mix, as well as outfielder Andy Pages. As for players on the active roster, infielder Gavin Lux or pitcher Dustin May are likely candidates to be included.

It seems like the Yankees and Dodgers would have the inside track on trade negotiations for Soto, but multiple other clubs are aggressively putting together offers for Soto, with the Mets at the top of the list.

Team owner Steve Cohen is not known for worrying about the luxury-tax thresholds, but a trade for Soto would require a lot of prospects from the Mets farm system, and only time will tell if the team will be prepared to make them available.

The Mets are currently leading the NL East with a record of 58-35 and have World Series odds of +700. They are contenders for the postseason, and with Cohen reportedly determined to bring home a championship, Soto could be the missing link.

A likely trade is for the Mets to get both Soto and pitcher Patrick Corbin (whose terrible contract the Nationals are looking to offload) and send second baseman Jeff McNeil and a combination of top prospects to the Nationals in return. Prospects like ​​Ronny Mauricio, Brett Baty, Mark Vientos, Tylor Megill, Francisco Alvarez, and Paul Wight are all likely to be a part of any offer from the Mets.

With a current record of 52-42, the Padres are still very much in the conversation for a wild card spot to the postseason, and I expect they’ll be approaching the Trade Deadline quite aggressively.

The team needs a big hitter, and even if they just look to take on Soto’s remaining contract rather than sign a big extension, the dream of seeing him playing alongside Fernando Tatís Jr. should be enough to see San Diego put in a competitive offer.

The Padres have a lot of young talent in their organization, which means they can put together a package for Soto that would be very attractive to a rebuilding team like the Nationals. Shortstop C.J. Abrams (21 years old), 23-year-old pitcher MacKenzie Gore, plus a combination of prospects like Robert Hassell III and Victor Lizarraga are all likely to be at the top of the list for a trade.

Rumors of interest from the White Sox have been floating around, and for good reason — the South Siders have needed a right fielder for ages now, and Soto would be a perfect fit.

The only reason I hold back from saying he is likely to head to Chicago is that I don’t think the White Sox will put up enough money to be competitive for his contract. The team is historically reluctant to sign mega contracts or even take a particularly aggressive approach to the Trade Deadline, so while I think Soto would be a fantastic addition to the White Sox, I think this might just be wishful thinking.

If the White Sox do decide to compete for Soto, they will likely have to put together an impressive package that includes Eloy Jiménez or Andrew Vaughn, neither of which Chicago fans would be particularly thrilled to part with.