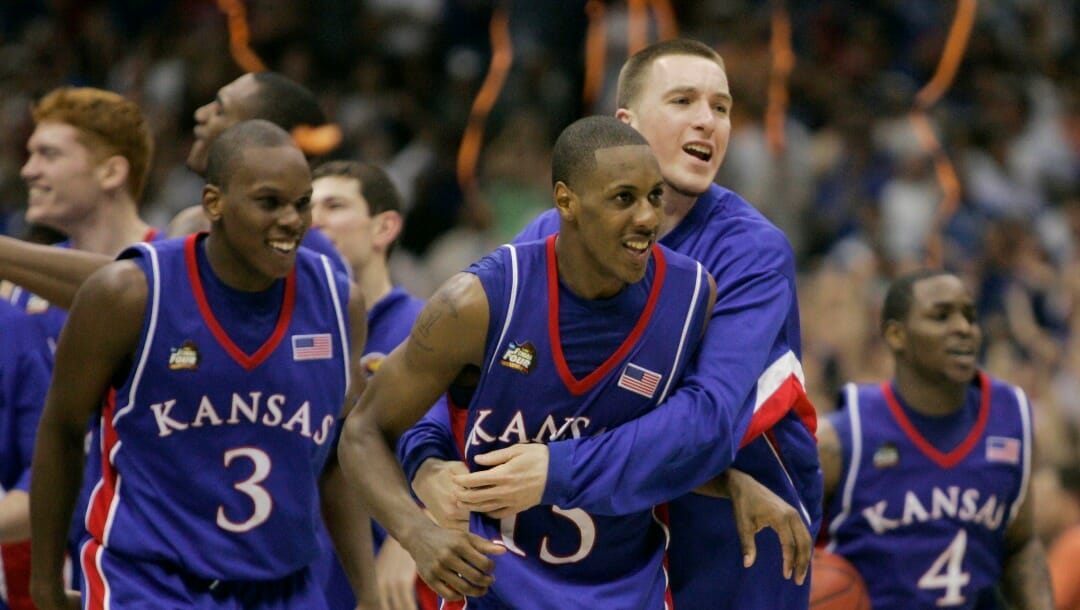 The 2008 NCAA Tournament remains remembered as the first (and currently, only) time since seeding began in 1979 that all four number-one seeds advanced to the Final Four. The event was held at the Alamodome in San Antonio. Memphis, Kansas, North Carolina, and UCLA all won their regionals as the top seeds.

Kansas won the 2008 NCAA Tournament with a victory over Memphis in the national championship.

The top of the field was “chalk,” but that does not mean the 2008 edition of the Big Dance was bereft of upsets. No. 13 seeds Siena and San Diego upset Vanderbilt and Connecticut as several double-digit seeds advanced to the Sweet 16.

Stephen Curry introduced himself to the nation with hot-shooting to upset Gonzaga, Georgetown, and Wisconsin and nearly stunned Kansas.

Ultimately, the four top seeds met in the national semifinals on April 5. Memphis got 28 points from Chris Douglas-Roberts and knocked off Russell Westbrook, Kevin Love, Darren Collison, and the UCLA Bruins by a score of 78-63.

The other semifinal was also a bit of a dud, with Kansas blasting North Carolina 84-66. Brandon Rush was the best player on the floor with 25 points as the Jayhawks kept AP Player of the Year Tyler Hansbrough well below his season averages.

The Kansas Jayhawks led by five points at halftime as head coaches Bill Self and John Calipari searched for their first national title.

The Memphis Tigers went on a 10-0 run deep in the second half to take a nine-point lead with 2:12 left in the contest. Kansas refused to quit, fouling Memphis to put the poor foul-shooting Tigers on the line. Memphis missed four of the final five free throws and opened the door for Kansas.

KU scored 12 points in the final two minutes of regulation, and Mario Chalmers nailed a three-pointer with 2.1 seconds left to tie the game and send it to overtime. The Jayhawks kept the momentum, scoring the first six points of the extra period en route to the 75-68 win.

It was the first national title for Bill Self.