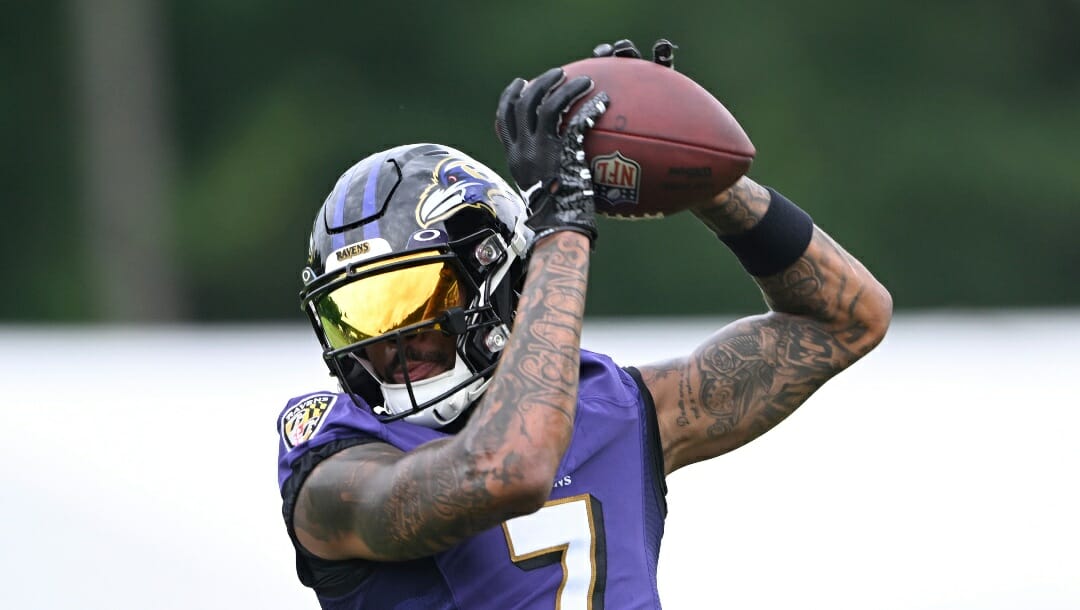 The Baltimore Ravens enter the 2022 season amid some fanfare in the NFL betting market. Still, it may be wise to temper expectations as several question marks in the lineup warrant further consideration before bettors submerge themselves in Ravens’ wagers.

The last place finishers in the AFC North last year are the odds-on favorites to reign atop the division this season and are priced at +2000 in the Super Bowl futures market.

The Ravens’ offense is a well-oiled machine with Lamar Jackson under center. In his three seasons as a starter, the former MVP has thrown for at least 2,757 yards and rushed for 767 or more yards, surpassing the 1,000-yard mark in 2019 and 2020.

Across that time, we’ve watched the emergence of Mark Andrews as a premier tight end in the NFL. Andrews is coming off a breakout campaign in which he set career-best marks in receptions, total yards, yards per game, and catch percentage. With Marquise Brown departing via trade at the draft, Andrews will be a focal point on offense for Jackson.

Therein lies another conundrum, as the Ravens will need someone to step up and replace Brown’s production.

Rashod Bateman was tapped as the next in line and will need to find a way to produce while being draped with the opponent’s top cornerback. The former Minnesota Golden Gopher was marginally productive as a third-option last year, hauling in 46 of 68 targets for 515 yards and one touchdown in 12 games.

Rushing isn’t the priority it once was for the Ravens. After leading the league in rushing play percentage in 2019 and 2020, Baltimore fell to 11th in the league last season, toting the ball 43.6% of the time. Some of that had to do with the injury to J.K. Dobbins, who tore his ACL in the final warm-up game and was forced to miss the entire season. That could mean less reliance on the passing game as the offense returns to classic Ravens football.

Fewer quality receiving options and more emphasis on the running game could mean mild regression from the Ravens’ offense. However, as we saw last year, none of that could matter if the defense doesn’t find a way to limit opponents.

Could the Defense Stop a Leaky Faucet?

The Ravens had a liberal interpretation of “defending” last year. Baltimore allowed the ninth-most yards, struggling to contain the passing game and giving up a league-worst 278.9 yards per contest.

They didn’t overhaul their secondary, but the Ravens added Marcus Williams and Kyle Fuller via free agency and wisely drafted safety Kyle Hamilton in the first round of the NFL Draft. The Ravens didn’t stop there, using their second, third, and both fourth-round draft picks on defenders.

Williams will immediately impact the Ravens, but there will be a learning curve for the newly-minted Ravens. We should see improvement on defense, but not the jump required to take the Ravens from the bottom to the top of the division.

This isn’t a true rags-to-riches story, as the Ravens have been an above-average football team for the past several seasons.

Still, they have a few things to prove to substantiate their position on the betting board. On that basis, it’s tough to rationalize backing the contenders as favorites to win the AFC North and justify the short price in the futures market.

Nevertheless, the Ravens are assuredly playoff bound, and, as we saw in previous seasons, Jackson – as he seeks to become one of the highest-paid NFL players in 2022 and beyond – could single-handedly take his team on a run.