Best NHL Goalies: Who Has Won the Hart and Conn Smythe? 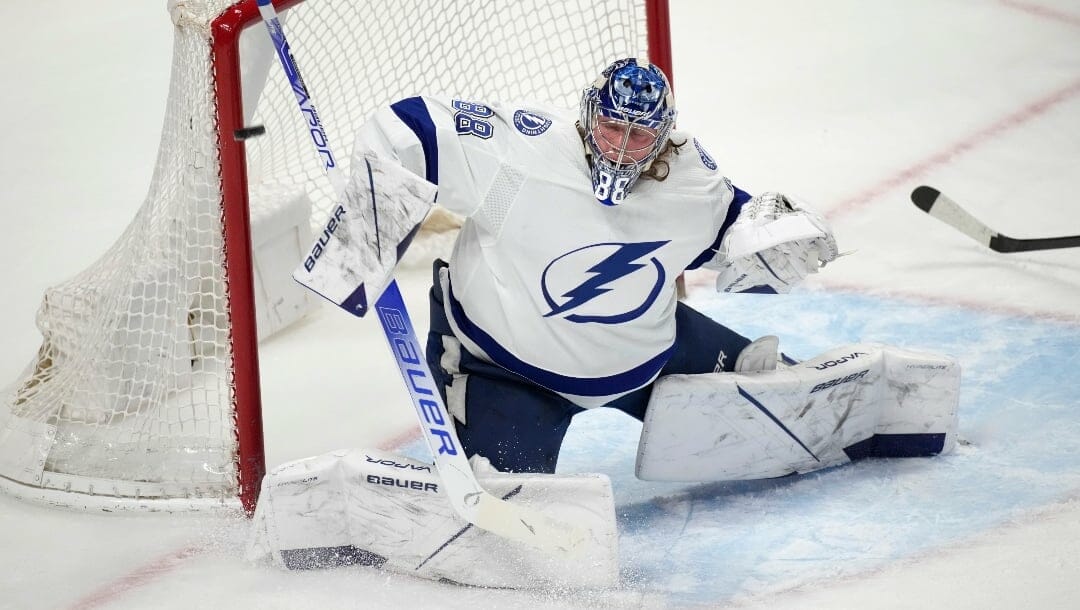 Only eight goaltenders won the Vezina and Conn Smythe during their career, one of whom is still playing.

NHL odds have Andrei Vasilevskiy, the only active goaltender to win the Vezina and Conn Smythe, as the second favorite to hoist (+550) the 2022-23 Vezina Trophy.

Only winning the Stanley Cup and Hart Trophy supersedes being named  a Vezina Trophy winner. The Vezina Trophy catapults those anointed into rarified air, an accomplishment shared by a minuscule percentage of NHL netminders.

So to win both the Vezina and Conn Smythe is an even more consecrated achievement, one reserved for the eight netminders below.

Fewer still won both coveted individual honors in the same season, with Tim Thomas (2011 with Boston), Ron Hextall (1987 with Philadelphia), and Bernie Parent (1974 and 1975 with Philadelphia) the only goaltenders to do so.

Vasilevskiy is the last man standing, the only active goaltender to win both venerated awards. The Tampa Bay ace won back-to-back Stanley Cups, the second of which resulted in his Conn Smythe triumph.

He secured his Vezina Trophy in 2019, the season before his first Stanley Cup. Vasilevskiy might have added to his Conn Smythe collection had the Lightning prevailed against Colorado last season, and the 28-year-old might not be finished amassing individual honors yet.

Tim Thomas is one of three netminders to win both trophies in the same season and the only one to do so in the last 35 years. Thomas tossed the Bruins on his back in 2011, leading Beantown to their first Stanley Cup in 39 years.

Thomas was 35-11-9 with a 2.00 goals against average (GAA) and a .938 save percentage (SV%). In addition, he notched nine shutouts and led the Bruins to the joint-seventh best regular-season record.

He won his first Vezina Trophy two years before the Bruins’ historic Cup run, going 36-11-7. That season he had a 2.10 GAA, a .933 SV%, and five shutouts. Thomas’ accomplishments are more pronounced, considering he only played 10 NHL seasons.

He also won the Conn Smythe twice with the Canadiens and was the youngest player, as a 20-year-old in 1986, to win the trophy for most valuable playoff performer. But, even more impressively, he won it in his first NHL season.

Roy is still the only three-time Conn Smythe winner. He won two with the Canadiens and one with Colorado during the latter stages of his illustrious career. In addition, Roy lifted the Stanley Cup four times.

Ron Hextall won the Vezina as a rookie in the 1986-87 campaign, which he followed by winning the Conn Smythe in the playoffs of the same season.

Despite losing to the Edmonton Oilers in a classic seven-game Stanley Cup final, Hextall became the fifth player to win the Conn Smythe on a team that failed to win the Cup.

The feisty Flyer took 104 penalty minutes in his rookie year, setting a record for most by a goaltender. In addition, he became the first goaltender to score a goal, which he also accomplished in an unprecedented rookie season.

Billy Smith backstopped the New York Islanders to four consecutive Stanley Cups, the last team to accomplish the feat. The Islanders won the Stanley Cup from 1979-83, and Smith won the Conn Smyth in 1982-83, the last of New York’s quartet of Cups.

Ken Dryden’s story is unlike any other. The former Canadiens netminder had played just six NHL games before being thrown into the fire against the dominant Bruins in the 1971 playoffs.

Not only did Dryden announce himself by snuffing out the league’s most prolific offensive team, but he also led the Habs to the Stanley Cup and won the Conn Smythe.

He won the Calder Trophy as the best rookie the year after, becoming the only player to win the Conn Smyth before his rookie season.

Surprisingly, the 1971 Conn Smythe marked the only time he won the award as the most valuable playoff performer.

However, Dryden went on to win five Vezinas, four of which in successive seasons, and six Stanley Cups, making his career one of history’s most accomplished. Dryden only played eight NHL seasons, six of which resulted in him lifting the Stanley Cup aloft.

Bernie Parent is the only netminder to win back-to-back Stanley Cups, Vezinas, and Conn Smythes. Success didn’t come immediately for Parent, who waited six seasons before ascending to prominence.

However, Parent made his best two years count, sweeping the accolades in his seventh and eighth NHL seasons.

Fittingly, those glorious two seasons for Parent and Philadelphia happened to be the last time the Flyers won the Stanley Cup.

Sandwiched between his final two Vezinas, Hall won the 1968 Conn Smythe despite falling at the final hurdle to the Montreal Canadiens. The Canadiens swept the Blues in the Stanley Cup final, but Hall’s performance still deserved the top individual playoff honor.