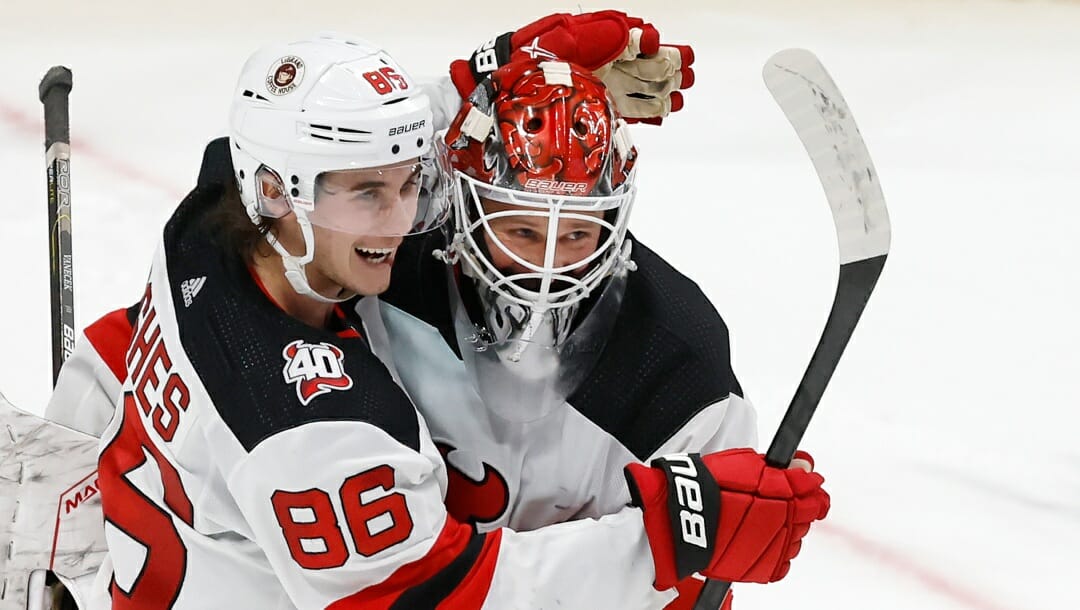 When Stanley Cup odds opened on June 26 – minutes after the Colorado Avalanche defeated the Tampa Bay Lightning in Game 6 of the Stanley Cup Final – the New Jersey Devils were an afterthought, buried at +8000 (24th-shortest odds) after missing the playoffs for the fourth straight season and ninth time in the last 10 seasons.

The Devils had the 22nd-shortest odds, but the eighth-largest ticket share as the public delivered the largest disproportionate vote of confidence in Stanley Cup betting. Their odds-to-tickets rank difference of +14 was the best among all teams.

The @NJDevils kept things rolling on the road Saturday, improving to 17-2-1 as the visitors this season to establish an NHL benchmark.#NHLStats: https://t.co/P011uxPRer pic.twitter.com/Zd2WOLpHxk

At the regular season’s halfway mark, the Devils now own 5.1% of the tickets, and the sixth-shortest odds (+1400), making them the biggest riser this season.

Here are the biggest risers and fallers (by odds rank) in Stanley Cup odds from the start of the regular season (Oct. 5) through Jan. 12:

The Devils’ Stanley Cup odds peaked in mid-December at +1000 (fourth-shortest) thanks to a franchise-record 21 wins in their first 26 games. Ten losses in 13 games pushed them down to +1400, but public interest hasn’t waned.

No team has climbed more in handle rank than the Boston Bruins as they chase the best regular-season record of all time.

The Bruins are still atop BetMGM’s NHL Power Rankings.

They made this mid-January list thanks to a gradual climb that most recently included a jump from +1800 to +1600, giving them the eight-shortest odds entering the second half. And the public is buying the strong first half.

Another winning streak of at least five games – their third this season – has pushed the second-year franchise into the top half of the odds board (16th, +4000). But the rise hasn’t resulted in a higher handle share; they’ve dropped from 1% to 0.8% since Oct. 5.

The Panthers’ inability to string together wins – zero winning streaks of at least three games this season – has kept them around .500 and shoved them down the odds board.

After a bizarre start – an eight-game losing streak followed by a seven-game winning streak – had the Blues’ odds in constant flux, they’ve stabilized, although not in a good way.

Only 10 teams have worse Stanley Cup odds than the 2019 champions, who entered this season with four straight playoff appearances and 10 appearances in the last 11 seasons.

Seven wins in their first 10 games kept the Oilers in the top 10 of Stanley Cup odds. Only 10 wins over their next 22 games pushed them outside the top 10. And they haven’t returned while struggling for consistency.