How Much Do NHL Refs Make per Season? 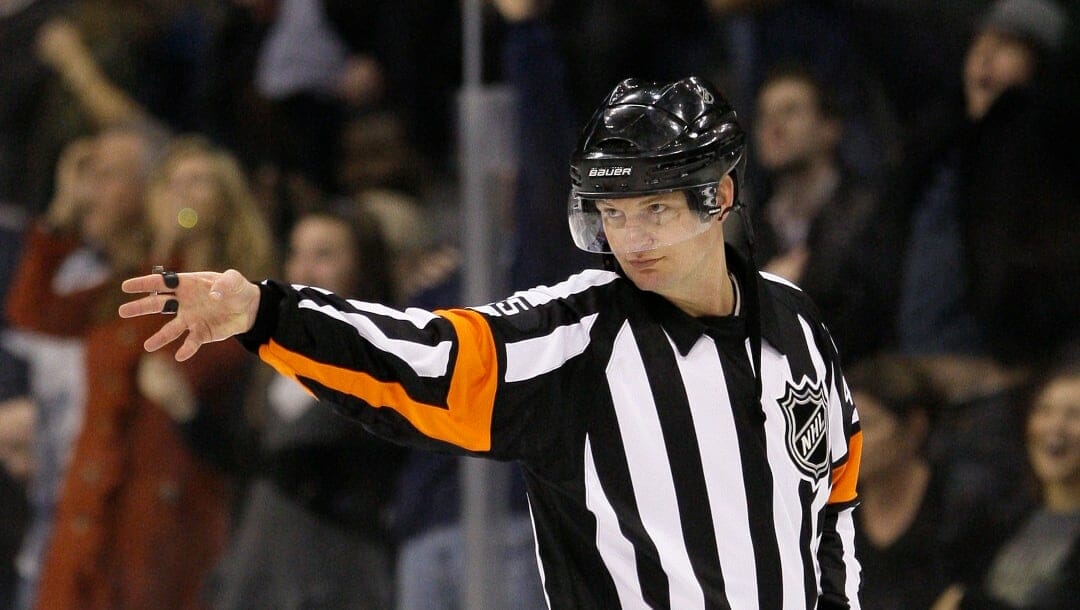 NHL referees have one of the most scrutinized and thankless vocations but are compensated handsomely for maintaining law and order.

Several things can impact your betting picks, including NHL odds and how a game is officiated.

Referees are almost unnoticeable when they execute their jobs according to the law, an ideal outcome for fans and players alike. On such occasions, when results are purely based on each team’s performance, it’s no wonder why referees are paid so generously.

To don the pinstripes, you must have an elephant’s skin, heavily resistant to unrelenting boos and outspoken criticism.

A referees’ remit includes a gambit of responsibilities, including helping break up donnybrooks – though to a much lesser extent than in previous generations – enforcing infractions, communicating with video replay officials, speaking directly to coaches, and dealing with a chorus of boos and “ref you suck” chants.

Referees must be in top physical shape and adept at ducking and dodging to mitigate the chances of getting hit by pucks flying at up to 100 mph.

Whether you want to classify it as stress pay, danger pay, or simply part and parcel of what they signed up for, NHL referees are compensated lavishly.

While they don’t make nearly as much as players, you won’t find any referee struggling to make ends meet.

According to scoutingtherefs.com, NHL referees earn up to $430,000 per year. That swollen salary is reserved for the most seasoned referees with at least 15 years of experience.

Entry-level salaries earmarked for first-year refs start at $200,000. Referees earn an incremental yearly increase and are expected to officiate up to 73 games per season.

However, most refs will end up officiating between 50-73 games, earning between $1,500 and $5,000 each game, depending on their seniority level.

Putting that into context, a first-year NHL ref makes the equivalent of a general pediatrician or a senior commercial airline pilot, according to Investopedia. Wily veterans rake in $430,000, the same pay rate as established surgeons, lawyers, and some CEOs.

If, instead, you take the total duration of an NHL game as the benchmark (about two and a half hours), refs rake in $33 per minute. All the boos in the world don’t justify such an elephantiasis pay rate.

Maybe a different career trajectory would be in the offing if I were to do it all over again. After discovering the astronomical amount established NHL referees earn, I’m sure I’m not the only one with those thoughts.

How Much Do Referees Earn in the Playoffs?

While the playoffs aren’t included as part of NHL refs’ salaries, each official is handed a generous bonus for partaking. Refs earn about $27,000 per playoff round.

However, no referee officiated more than five games in a single series during the 2022 postseason. Refs make about $5,400 per playoff game based on that five-game maximum.

How Much Do Linesmen Earn?

While linesmen aren’t offered the same elevated pay rate as their pinstripe brethren, they still walk – in this case, skate – away with heaps of moola.

Burgeoning linesmen just breaking into the NHL get paid about $137,000 annually, while long-serving refs’ assistants with over 15 years of experience earn $228,000, about the same as an obstetrician.

In the playoffs, linesmen make about $17,500 per playoff round. If linesmen work five games per series, they rake in $3,500 per outing.

What About Standby and Injured Officials?

As a contingency, each NHL regular season contest has a standby ref and linesman. Just for attending the game, refs waiting in the wings make a swift grand. They earn $2,750 if their number is called.

Linesmen earn $650 for twiddling their thumbs behind the scenes and get paid $1,775 for jumping into the spotlight.

Refs also get compensated for games missed due to injury. If a ref gets injured after the midway point of the season, they receive 75% of their usual earnings during the postseason. Those injured before the halfway mark are eligible to earn 50% of regular postseason pay.

That means injured refs make between $13,000-$20,250 per playoff series, depending on whether they were injured before or after the season’s halfway point.

So if you have aspirations of making the NHL but can’t quite cut the mustard, build up some extra layers of skin and focus on becoming a pinstripe team member. You might be unheralded and unappreciated, but you certainly won’t be underpaid.