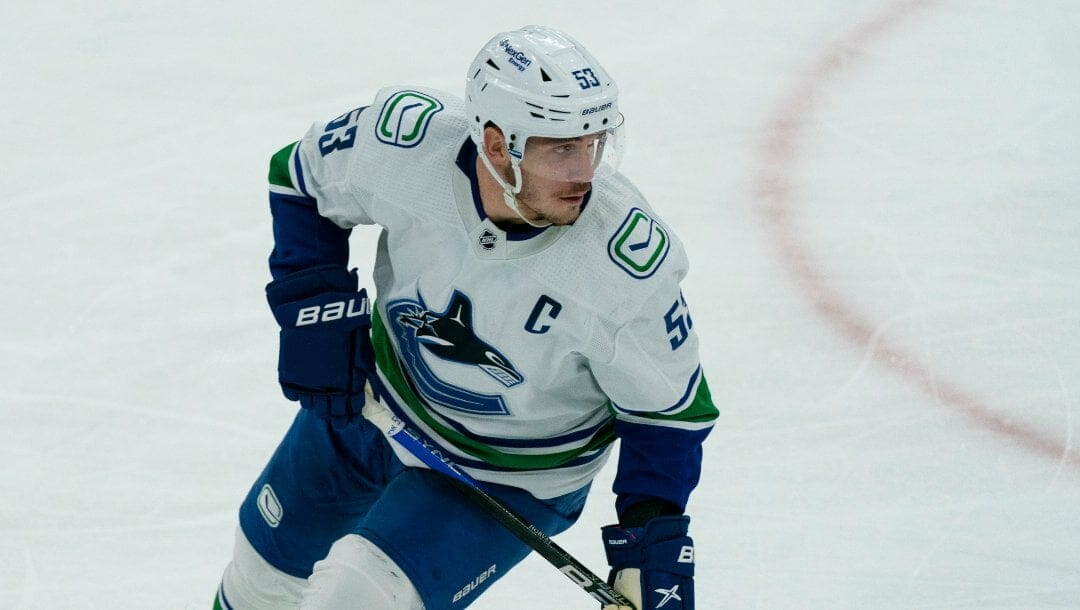 The NHL Trade Deadline is still a few months away, but that doesn’t mean some big moves aren’t already in the works. With the conference and division standings slowly separating teams into the haves and have-nots, it’s becoming progressively clearer who will be in the playoffs — and who will be making waves before the deadline.

For those teams still in contention, bolstering their roster before the trade deadline is one of the only ways left to maximize Stanley Cup odds. For those who have effectively been eliminated from this year’s postseason, it’s time to sell, sell, sell.

Sheesh, this shot from @BoHorvat was labeled for that corner. 🎯 pic.twitter.com/6tVrFP9ZbQ

The trade deadline is Mar. 3, 2023, at 3 p.m. While trades are still allowed after that time, players acquired after the deadline aren’t permitted to play for their new team in the Stanley Cup Playoffs. With teams looking to finalize their rosters for the postseason, this is the year’s busiest time for trades.

Horvat has spent his entire professional hockey career with the Vancouver Canucks, but contract talks have reportedly stalled, and the current team captain could soon find himself playing somewhere else.

As of Jan. 5, the Canucks’ captain has recorded 28 goals, 14 assists, 42 points, and 112 shots in 37 games during the 2022-23 season. He’s recorded the most shots and goals of anyone on the team and the second-most points, only behind Elias Pettersson.

As Vancouver continues to battle their way through a rebuilding era, Horvat is a hot trade target — and with a disappointing record of 16-18-3, I’d be surprised if the Canucks aren’t interested in selling.

Kane is an interesting player to watch right now because he’s definitely leaving Chicago — it’s just a matter of when and where. He’s an unrestricted free agent after this season and has made it clear that he wants to leave the Windy City, but could he be moving sooner rather than later?

As of Jan. 5, Kane has recorded seven goals, 20 assists, 27 points, and 133 shots in 37 games during the 2022-23 season. The three-time Stanley Cup champion has been on trade watch since last season, and his reported frustrations with the Blackhawks’ underwhelming performance are understandable.

Kane will be a hot target for teams interested in bolstering their roster before the playoffs, and with Chicago now firmly in last place with a record of 8-25-4, they are likely to be very keen on selling.

your new year's resolution should be to watch this Patrick Kane goal pic.twitter.com/2GDZ6Z6tlz

A hand injury saw Tarasenko land on the injured reserve on Monday, Jan. 2, but four weeks on the bench is unlikely to stop the St. Louis Blues from being able to sell the right winger before the deadline.

Tarasenko signed an eight-year, $60 million contract with the Blues on July 7, 2015, and this isn’t the first time he’s been in trade conversations since then. The 31-year-old requested to be traded in July of 2021 due to dissatisfaction with how the Blues handled his prior shoulder injuries, but he wasn’t moved.

Nearly two seasons later, including a playoff berth to the second round, I’m sure both he and the team have largely moved on from the animosity, but it’ll still be interesting to see how St. Louis shops him on the market. As of Jan. 5, Tarasenko has recorded 10 goals, 19 assists, 29 points, and 90 shots in 34 games during the 2022-23 season.

Even with an injury, the alternate captain will likely be a top player on the market before the trade deadline.

The Philadelphia Flyers have increased the gap between themselves and the playoffs to the point where their chances of advancing are now effectively zero — and if the Flyers are going nowhere, van Riemsdyk is almost certainly going somewhere.

As of Jan. 5, van Riemsdyk has recorded five goals, 10 assists, 15 points, and 39 shots in 18 games during the 2022-23 season. Despite an injury interrupting his playing time, the left winger has been hot on the ice, ensuring his trade value is high before the deadline.

Van Riemsdyk signed a five-year, $35 million contract with the Flyers before the 2018-19 season and is on the brink of free agency. Now is the perfect time for Philadelphia to move him for a mid-round draft pick, and there will surely be a slew of teams who’d be happy to take him.

The Anaheim Ducks are third-last in the league this season, effectively ensuring there’s no playoff berth on the horizon. The team is likely to fall firmly on the side of selling as they approach the trade deadline, and defenceman Klingberg could find himself on the market.

Klingberg signed a one-year, $7 million contract with the Ducks before the 2022-23 season, and as of Jan. 5, he has recorded four goals, seven assists, 11 points, and 44 shots in 31 games. With only a few months left on his deal, the 30-year-old is likely to be a hot trade target for teams needing a strong defender for the playoffs.

The Ducks are still very much in rebuild mode, so they’re unlikely to keep Klingberg through the deadline. He has a modified no-trade clause in his contract, but I’m sure Anaheim won’t have too much trouble finding a variety of teams interested in acquiring the defenceman.