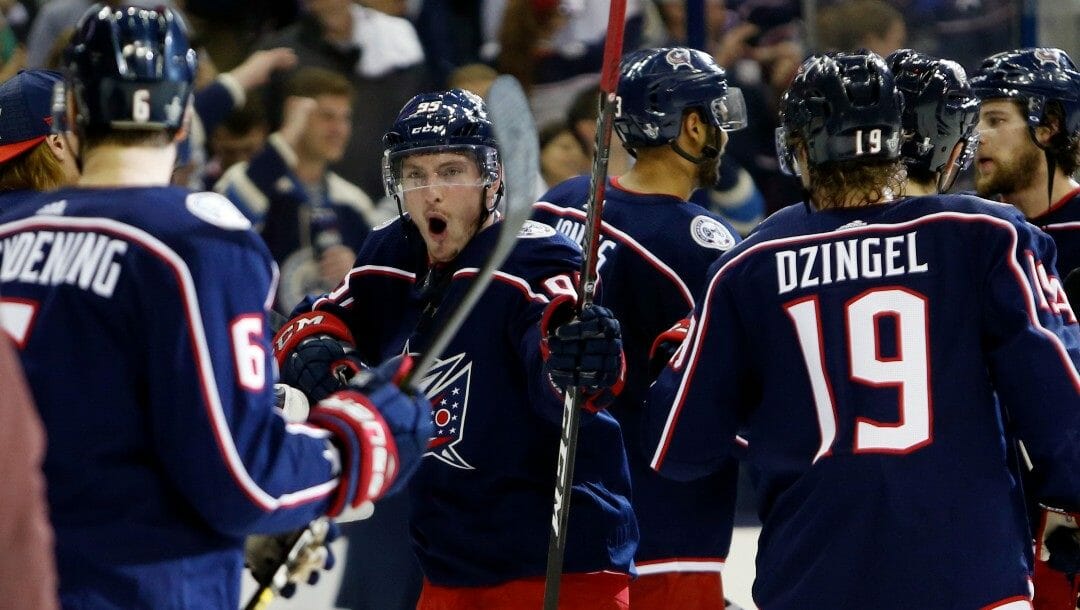 The story of the first round of the NHL playoffs so far has been the play of the underdogs with the Capitals, Lightning, Bruins, Kings, Blues, and Stars all tied or leading their respective series.

The majority of these teams did not have great Stanley Cup betting odds heading into the postseason. So, with each club looking to prove the pundits and NHL betting community wrong, it prompted me to consider, what are the greatest first-round upsets in NHL playoff history?

Below is my list of the five biggest first-round upsets in NHL playoff history.

After being ousted in the first round in each of their previous four playoff appearances, hockey fans expected more of the same when the eighth-seeded Edmonton Oilers (95 points) met the mighty Detroit Red Wings (124 points).

Possessing a solid mix of both veteran experience and youth, Detroit cruised to the Presidents’ Trophy while ranked second in the league in both goals for and against.

Riding the superb goaltending of Dwayne Roloson, the Oilers managed to take a 3-2 series lead back to Edmonton for Game 6. Overcoming a two-goal deficit in the third, the Oilers would tie things up at three, setting the stage for Ales Hemsky’s eventual game-winner in one of the greatest moments in the post-Gretzky/Messier era.

Edmonton rode its momentum all the way to the Stanley Cup Final, where the Oilers fell to the Carolina Hurricanes in seven games.

A true Cinderella story if there ever was one, the 1990-91 Minnesota North Stars come in at No. 4 on my list.

At a time when 16 of the then 21 clubs qualified for the postseason, Minnesota’s 68 points were enough to secure a playoff berth – this despite finishing the regular season 12 games below .500.

The North Stars’ first-round opponent was none other than the Presidents’ Trophy-winning Chicago Blackhawks (106 points), a team that featured Calder and Vezina-winning goaltender Ed Belfour, as well as All-Stars Chris Chelios and Jeremy Roenick.

Minnesota would go on to stun the Blackhawks in six games, one of many upsets the club pulled off on their way to the 1991 Stanley Cup Final, where they were finally ousted by the Pittsburgh Penguins, 4-2.

Led by Alexander Ovechkin (109 points) and Nicklas Backstrom (101 points), the Washington Capitals had one of the most potent offenses in NHL history. Featuring seven 20-goal scorers, Washington’s 313 tallies were the highest total of any team since 1995-96.

Finishing the regular season with 121 points, the Capitals earned their first-ever Presidents’ Trophy, setting up an opening-round matchup with the 88-point Montreal Canadiens.

After losing Game 1 in overtime, the Capitals would real off three straight wins. It was from there that things fell apart.

Montreal won the next two games to tie the series at three and force a deciding Game 7.

Despite outshooting the Habs 42-16, Washington could only muster one goal on Montreal netminder Jaroslav Halak. The Canadiens would go on to win the game 2-1, leaving the Verizon Center crowd in shock.

It’s amazing to think that a team comprised of Wayne Gretzky, Mark Messier, and Jari Kurri would ever fail to make it out of the first round. Well, that’s exactly what happened in 1982, when the Oilers (111 points) were stunned by the Los Angeles Kings – a club that finished a full 48 points behind their counterparts.

Downing Edmonton in five games, the series was highlighted by Game 3’s “Miracle on Manchester,” which saw the Kings overcome a five-goal third-period deficit en route to earning a 6-5 overtime victory – the largest comeback in NHL playoff history.

The Oilers dynasty would begin two years later, but this particular upset will forever live in NHL infamy.

Coming in at No. 1 is the Tampa Bay Lightning’s epic meltdown against the Columbus Blue Jackets in 2019.

That year’s Presidents’ Trophy winner (128 points), Tampa’s 62 regular-season wins tied the 1995-96 Red Wings for the most in NHL history. Securing a playoff berth in 68 games, it had been nearly two months since the Lightning played meaningful hockey.

It certainly showed as Jon Cooper’s squad was flat out embarrassed, as they failed to win a single game in a stunning sweep at the hands of a Jackets squad that finished 30 points behind Tampa during the regular season, as they scored 67 fewer goals.

If there is a silver lining in all of this, however, it’s that the Lightning clearly used the historic defeat as fuel, winning back-to-back Stanley Cups and helping erase some of the demons associated with the greatest first-round upset in NHL playoff history.