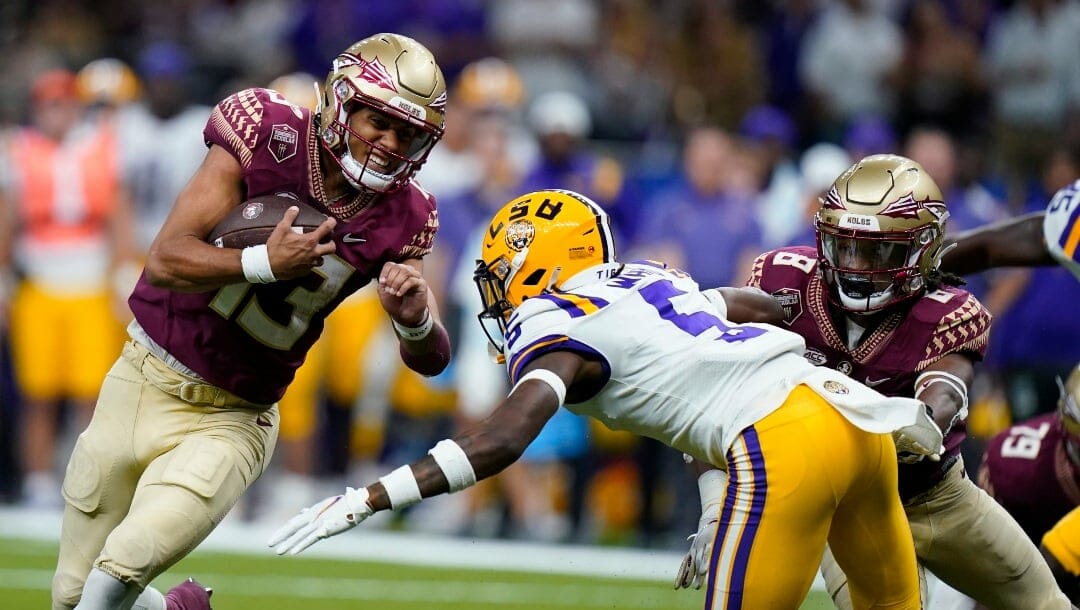 Week 1 of the 2022 college football season was highlighted by Notre Dame-Ohio State, Oregon-Georgia, Utah-Florida, and several other intriguing games.

What’s on tap for Week 1 of the 2023 college football season? Here are the biggest games scheduled for Labor Day weekend next year:

It will be their second all-time meeting in Florida – and the first since 1990 – as the Seminoles look to extend their winning streak over LSU to six games.

This game will be a leading candidate for ESPN’s College GameDay.

This will be Florida’s first regular-season game outside the Eastern and Central time zones since tying USC in Los Angeles in 1983.

One year after opening the Billy Napier era with a win over Utah, the Gators will visit the state of Utah for the first time ever. Before last year’s game in Gainesville, their only other game against a team from Utah came in 1977, when they also beat the Utes in Gainesville.

TCU’s Cinderella season ended with a thud and their 2023 two-deep will look a lot different. Still, they’ll be the defending national runner-up and a Big 12 title contender facing Deion Sanders and Colorado.

It’ll likely take Sanders a couple years of roster turnover before competing with a team of TCU’s caliber on the road, but this could be entertaining nonetheless.

TCU finished the 2022 regular season with nine ATS wins, tied for the second-most in college football.

This is about as close to a true neutral-site game as you’ll see in college football. Charlotte is almost exactly in the middle of the two campuses.

But that doesn’t make it any less idiotic to steal what could be a top-25 matchup from college towns.

Ten years after this two-game home-and-home series was scheduled in 2013, the Mountaineers and Nittany Lions will play in Happy Valley for the first time since a 45-point Penn State win in 1991.

It’ll be an early test for hot seat coach Neal Brown, whose buyout is 100% of the remaining contract if fired before Dec. 31, 2024.

The Chris Petersen Bowl hasn’t been played in the regular season since Boise State’s three-point win over its former coach in 2015. Petersen, however, did blow out his former team four years later in the Las Vegas Bowl.

The Broncos and Huskies have met in Seattle only once, a 38-6 Washington win in Week 1 of the 2013 season.

This will be Coastal Carolina’s FBS first game west of the Central time zone as they play UCLA for the first time ever.

This, unfortunately, isn’t a home-and-home series; the Chanticleers will receive $1.1 million to participate in the first game of UCLA’s post-Dorian Thompson-Robinson era.