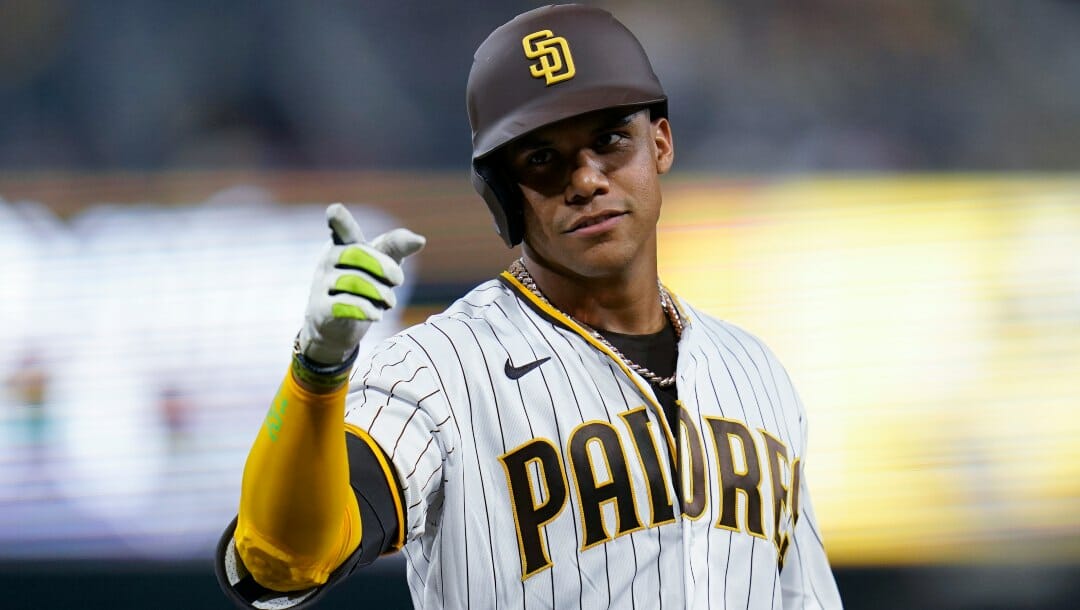 The MLB Trade Deadline is now behind us, confirming team rosters for the regular season’s second half and beyond. Plenty of big moves were made in the first days of August, but few teams were as aggressive as the San Diego Padres.

The Padres are in second place in the NL West with a record of 61-46, 11.5 games behind the Los Angeles Dodgers. Their odds to win the division are currently at +1800, with World Series odds of +900. Even before a number of top players at the deadline moved to San Diego, it was clear the season wasn’t over for the Padres.

Already holding onto the second Wild Card spot with both hands, the team used its last chance to trade to ensure they’re fully equipped to play deep into October.

Since Soto turned down a 15-year, $440 million contract extension offer from the Nationals in mid-July, rumors have swirled regarding whether he’d be traded at the deadline and, if so, where he’d be headed.

It seemed every team wanted the recent Home Run Derby winner, with the Yankees, Dodgers, Mets, and Cardinals all reportedly scrambling to put together offers.

To not only land Soto but also All-Star infielder Bell is a hugely influential move by the Padres, proving that they are taking this postseason very seriously. Bell had been with the Nationals since December 2020, and the first baseman produced. He is batting .301/.384/.493 so far this season with 14 homers and 57 RBI.

Without an extension, Bell will enter free agency at the end of this season, but Soto still has 2.5 years left of club control. So, even if the Padres don’t offer to extend Bell, they’ve locked in at least a few impressive seasons with Soto before the loss of prospects becomes any sort of issue.

The Padres weren’t done with just trading for Soto and Bell at the deadline, either. Also on Tuesday, San Diego acquired third baseman/utility player Brandon Drury from the Cincinnati Reds in exchange for shortstop prospect Victor Acosta.

Drury was arguably the Reds’ best position player, especially considering he can play all over the diamond. Slashing .274/.335/.520 with 20 homers and 59 RBI in 92 games this season with the Reds, Drury made one hell of an impression in his debut with the Padres on Wednesday, hitting a grand slam off the first pitch thrown at him.

Much to the chagrin of Brewers fans, the Padres acquired star reliever Josh Hader from Milwaukee in exchange for pitchers Taylor Rogers, Robert Gasser, and Dinelson Lamet, and outfielder Esteury Ruiz.

While fans largely seemed ecstatic with the acquisitions of Soto, Bell, and Drury, others seemed more concerned about how much the Padres sacrificed to get them.

Abrams and Gore are both very young, only having made their major league debuts in April. Hassell, Wood, Acosta, and Gasser were ranked first, third, sixth, and seventh, respectively on MLB.com’s Prospect Rankings in the Padres’ organization. Susana was ranked 14th and Ruiz 28th. It’s clear that San Diego traded a lot of future contenders to win now, and not everybody loved the tactic.

Regarding their new acquisitions, Soto is the only player signed for another 2.5 seasons. Hader will enter free agency at the end of the 2023 season, and both Bell and Drury will do so at the end of 2022 — unless the Padres offer an extension.

Keeping these players will be extremely expensive, leading fans to wonder if these acquisitions were always just intended to be rental players.

What Are the San Diego Padres’ MLB Playoff Odds Now?

So considering what they gave up, all eyes are on San Diego to prove their plan will work by making an appearance in the playoffs.

The New York Yankees will almost certainly be the World Series contender from the American League, with odds currently sitting at +350 to win it all. The Dodgers hold the same odds in the National League, and with a record of 71-33, they are the team for the Padres to beat.

Regardless of whether you agree with their sacrifices long-term, there’s no question the Padres have taken real steps to bolster their roster for this postseason, and it’s highly likely to pay off.

All fans want to see their team succeed, and in my opinion, it’s far better to see a team put it all on the line to live in the moment than have them reluctant to make big moves in fear of what the future could bring (I’m looking at you, Chicago White Sox). Obviously, there’s a middle ground between overspending and doing nothing, and the jury is still out on whether the Padres fell to the former this week. Only time will tell if it pays off for them.

At the end of the day, fans can disagree with the front office as much as they want, but all is forgiven if they make it to the playoffs.

Live sports betting is available during each MLB game this season. From first pitch through the final out, you can view updated run lines, over/under totals, and more live sports betting opportunities at the best online sportsbook.