All 3-1 Series Deficit Comebacks in the NBA 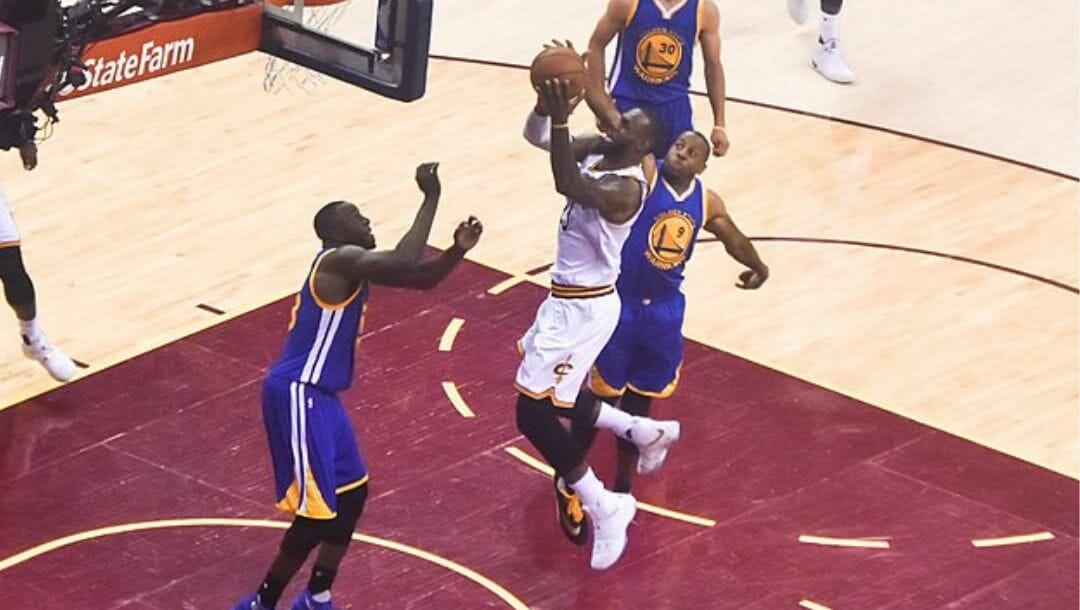 History tells us that out of the 270 teams who found themselves on the wrong end of this commanding deficit, only 13 teams have defied the NBA odds and mounted a comeback to win the series. The most recent team to do that was the 2020 Denver Nuggets when they beat the Utah Jazz and the Los Angeles Clippers.

But the most famous 3-1 comeback in the NBA was when the Cleveland Cavaliers turned the tide against the Golden State Warriors during the 2016 NBA Finals to blow up the NBA betting lines. Here’s a list of the 13 teams that engineered a rally to steal the series away from their foe eventually.

After an impressive regular season that saw them claim the second seed in the Eastern Conference with a 56-28, the Boston Celtics were one of the title favorites that year. Led by the trio of John Havlicek, Bill Russell and Sam Jones, Boston has cruised past the Detroit Pistons in the Eastern Division Semifinals. Then they found themselves in the Eastern Division Finals against the league’s number one team, the Philadelphia 76ers.

The Celtics won the first game of the series but saw themselves down by 3-1 after dropping the next three games. But the team still managed to mount the first-ever 3-1 series comeback in NBA history by winning the next three games and advancing to the NBA Finals. There, they outplayed the duo of Elgin Baylor and Jerry West in six games to claim their 10th championship in franchise history.

The second 3-1 series deficit comeback happened in the 1969-70 season when the second-seeded Los Angeles Lakers yielded to the fourth-seeded Phoenix Suns in the Western Division Semifinals. But thanks to the trio of Wilt Chamberlain, Jerry West and Elgin Baylor, the Lakers were able to flip the series around and eventually break the hearts of Phoenix by winning the series, 4-3.

But unlike Boston in 1968, the purple and gold team failed to complete the season with a championship as the New York Knicks, spearheaded by Willis Reed and Walt Frazier, edged them out in a hard-fought seven-game NBA Finals matchup.

The Washington Bullets made a fantastic run in the 1978-79 season by becoming the number one team in the Eastern Conference. This allowed them to face the Atlanta Hawks in the conference semifinals and cruised past them in seven games. Then in the conference finals, they were pitted against the San Antonio Spurs, who had George Gervin and Larry Kenon on their roster.

Washington received three losses in the first four games of that series but was able to win three straight close games to eliminate the second-seeded team and advance to the NBA Finals. They were able to win the first game during the finals, but couldn’t win another three as Gus Williams, Dennis Johnson and Jack Sikma and the rest of Seattle’s team were too much to handle for them, losing the series, 4-1.

In the 1980-81 season, the Boston Celtics appeared to be a lock for the title after winning 62 games in the regular season and sweeping the Chicago Bulls in the Eastern Conference Semifinals. Little did they know that they would face a massive adversary in the conference finals against Julius Erving and the Philadelphia 76ers when they dug a 3-1 series hole.

But Larry Bird, Robert Parish and Kevin McHale would not let their fantastic season go to waste as they uncorked a comeback to eliminate the gritty 76ers team. Eventually, they set up an NBA Finals showdown with the Houston Rockets, but they made sure to finish them off in six games. It was Boston’s 14th title in franchise history.

The 1994 NBA defending champions Houston Rockets headed into the 1995 playoffs as the sixth-seeded team, but they could beat the third-seeded Utah Jazz in the opening round through five games. Then, in the second round, they faced Charles Barkley and the number two team Phoenix Suns, where they experienced the brink of elimination by facing a 3-1 deficit. However, they managed to pull off a huge comeback and eked out a 4-3 series win.

Since that triumph, the Hakeem Olajuwon-led squad only tasted two losses in the conference finals to the San Antonio Spurs and ultimately swept the Orlando Magic in the NBA Finals that had Shaquille O’Neal and Penny Hardaway to win their back-to-back titles. Aside from Olajuwon, other key members of that squad were Clyde Drexler, Kenny Smith and Robert Horry.

The beginning of the heated rivalry between the New York Knicks and Miami Heat happened during the 1997 postseason when the two teams crossed paths in the Eastern Conference semifinals. The Knicks jumped into a 3-1 series, only to lose the next three games to Alonzo Mourning and Miami.

Tim Hardaway and Voshon Lenard were also significant contributors to that incredible comeback. Unfortunately, the Heat succumbed to the eventual champions, Chicago Bulls, in five games as they failed to replicate their comeback bid against Michael Jordan and co.

An early blow hit Detroit’s playoff campaign in the 2003 postseason as they were on the brink of elimination due to the stellar play from Tracy McGrady and the lower seeded Orlando Magic team that jumped into a 3-1 series lead. But Richard Hamilton and Chauncey Billups have initiated an enormous comeback to get past the first round in seven games.

They faced the 76ers in the second round and steadily beat them in six games. However, when they reached the Eastern Conference Finals, they were rudely swept by the New Jersey Nets, with Jason Kidd, Kenyon Martin and Richard Jefferson leading the squad.

In the 2005-06 playoffs, the second-seeded Phoenix Suns set up a date with the seventh-seeded Los Angeles Lakers in the first round of the playoffs. They were the favorites to win that series as it was the second season that Kobe Bryant was a solo act after his split with Shaquille O’Neal. But Phoenix was shell-shocked as the lower seeded team leaped into a 3-1 series lead.

On this day in 2006, the #Suns finished off a 3-1 comeback to beat the #Lakers in Game 7 and move on to the Western Conference Semifinals https://t.co/HUjDBm5WL9

But the Suns refused to go down without a fight and its back-to-back MVP winner Steve Nash took charge in the miraculous comeback, which saw them win the series in seven games. However, Dallas eliminated them in the Western Conference Finals in six games.

James Harden and Dwight Howard’s tandem in Houston during the 2014-15 season was a sight to behold due to their accomplishment, including the second-seed in the playoffs and a dominant 4-1 series win over the Dallas Mavericks in the first round. But it did experience a huge hurdle in the conference semifinals when Blake Griffin and the Los Angeles Clippers put them in a 3-1 series hole.

For first time since 1997, Rockets are headed to the Conference finals. HOU beats LAC 113-100 in Game 7 to advance. pic.twitter.com/Xbms5OLPrf

The Beard and Superman received timely contributions from their role players. It propelled them to stage a gigantic turnaround in the series, which they eventually won in seven games. However, the Cinderella run was stopped in the Western Conference Finals as the eventual champions Golden State Warriors stamped their class over the Rockets with a 4-1 series win.

The record-setting year for the Golden State Warriors in 2016, who won 73 games in the regular season, was in danger during the Western Conference Finals against the Oklahoma City Thunder as the third-seeded team built a commanding 3-1 series lead. But the Splash Brothers of Stephen Curry and Klay Thompson wouldn’t let the Thunder dethrone them.

Thanks to the big-time and timely baskets they made in the last three games, the Warriors resurrected from the 3-1 deficit to winning the seventh game. That win punched them another ticket to the NBA Finals for the second straight year but ironically lost the title to the Cleveland Cavaliers by giving up their own 3-1 series lead.

As mentioned above, the Cleveland Cavaliers toppled the Golden State Warriors in the 2016 NBA Finals. They both swept the Detroit Pistons and Atlanta Hawks in rounds one and two before dominating the Toronto Raptors in six games. Cleveland, who ran through the competition in the Eastern Conference by only losing two games prior throughout their campaign.

In the NBA Finals, however, the defending champions looked like they were too much for the Eastern Conference Champions and claimed a commanding 3-1 lead in the series. Until the duo of LeBron James and Kyrie Irving put up a record-breaking performance from game five to game seven to score the most significant comeback and upset in league history.

The Denver Nuggets have set an NBA Playoff record during the 2019-20 season as the only team in league history to come back from a multiple 3-1 series deficit in the same season. They first did it against the Utah Jazz when Donovan Mitchell guided his team to the superior series lead. But big performances from Jamal Murray have made it possible for them to win the series in seven games.

"We believe in each other."

Hear from Murray & Jokic after the @nuggets completed their 2nd consecutive 3-1 series comeback with the Game 7 win!

In the second round, it was a similar story when they faced the Los Angeles Clippers. The Nuggets were down again by 3-1 in the series, but Jamal Murray and Nikola Jokic produced season-saving performances to propel them into their first conference finals appearance since 2009. Their inspiring campaign was halted by the eventual champions, Los Angeles Lakers, after a 4-1 series win in the Western Conference Finals.