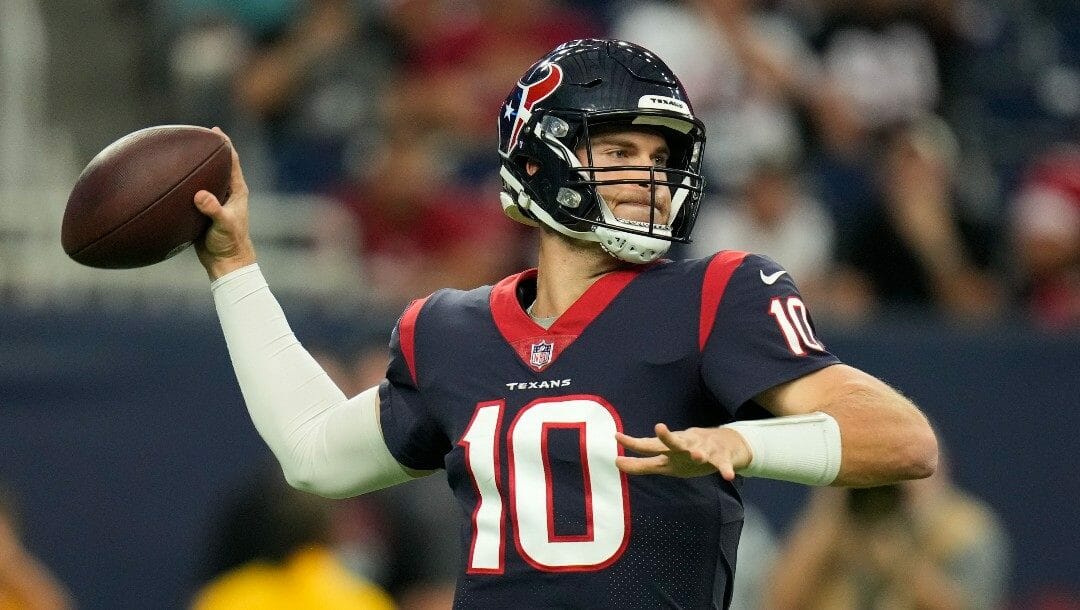 The Texans enter the 2022 campaign with the longest NFL odds on the BetMGM Super Bowl futures board.

Houston is priced as +30000 longshots to win the Super Bowl and have the lowest implied win total. But that’s what you get when you trade away a premier wide receiver and a franchise quarterback for pennies on the dollar.

It should be considered wildly successful if the Texans win four games this year.

It’s not all bad in Houston, as the Texans were able to restock their prospects cupboard with their 2022 draft picks, four of which came in the first two rounds. Those first four picks were split evenly across offense and defense, with two highly-rated players joining the team on both sides of the ball.

With the third overall selection, the Texans drafted cornerback Derek Stingley Jr. The former LSU Tiger was rated as one of two pre-eminent cornerbacks available, and the Texans landed a stalwart with their first selection.

I think the #Patriots should simply draft John Metchie. My goodness. pic.twitter.com/ZemCCwNWWF

Green was ranked as the best offensive lineman available and fills a significant gap for a Texans squad that managed just 83.6 rushing yards per game in 2021. The Texas A&M Aggies alum will create rushing lanes for Dameon Pierce, the team’s fourth-round selection, while affording Davis Mills improved protection.

Before a torn ACL caused him to fall in the draft, Metchie III was widely expected to be taken in the first round. The injury scared teams off, and the Canadian fell into the Texans’ lap in round two. Metchie remains unavailable due to an acute promyelocytic leukemia diagnosis, but the prognosis is optimistic, and the Texans will be hoping Metchie is good to go for 2023.

Rookie linebacker Christian Harris will also be watching from the sidelines when the season starts. The third-round pick could end up being the steal of the draft. Although slightly undersized, Harris was brilliant throughout his tenure with the Alabama Crimson Tide and could be an impact player in the NFL. He’ll get plenty of chances to shine as the starter once his hamstring injury heals.

The Best of the Rest

The rest of the lineup comprises underwhelming players from last year’s 4-13 team, which finished near the bottom of the pack in nearly every metric and statistic.

The Mills to Brandin Cooks connection will be re-established, and the veteran wideout probably surpasses the 1,000-yard receiving threshold for the seventh time in eight seasons. Outside of that, no other receiver eclipsed 446 yards last year and the top rusher, Rex Burkhead, barely surpassed 400 rushing yards.

There’s limited quality on the Texans’ roster, and that’s already been cooked into their current price.

There is no value in considering the Texans as Super Bowl contenders, and the implied probability of 0.33% overestimates Houston’s chances this season. Their young talent could show promise, but that doesn’t mean they are worth backing to win many games.