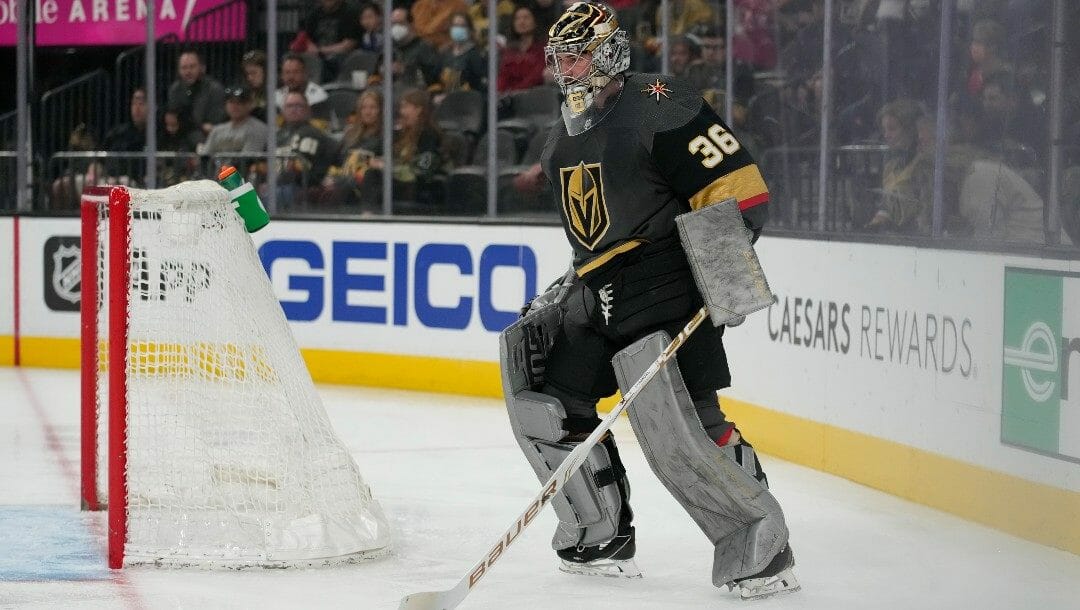 When it comes to NHL playoff odds, it seems like almost a foregone conclusion that the Vegas Golden Knights are headed to the 2021-22 NHL playoffs.

Currently, the Knights have NHL odds of -150 to make the postseason, which comes with a 60% implied probability.

However, in reconciling their circumstances with the betting price, we suggest that the value lies in backing the Knights to miss the Stanley Cup playoffs.

Despite being backed into a salary cap corner, Vegas pulled off a big trade early in the season, acquiring Jack Eichel from the Buffalo Sabres. Still, they needed to wait until Mark Stone was transferred to the long-term injury reserve to have enough cap space to activate Eichel off the list and elevate him to the active roster.

Injuries to key players have allowed Vegas to finagle their way under the cap; however, they can’t have a fully healthy roster in the regular season without putting themselves over the cap.

Monday’s trade deadline could signal the Golden Knights’ intention on how they plan on approaching the playoffs.

Moving out salary would suggest that they plan on getting Alec Martinez and Stone off the LTIR, which allows them to get back into the fold before the end of the regular season. Oppositely, if the Golden Knights fail to make a move, that would indicate that Stone and Martinez likely aren’t returning until the start of the playoffs. The latter could sink the Knights’ chances of making the postseason.

Since February 9, the Golden Knights have gone 6-10-1 without Stone in the lineup.

Those issues have been compounded by injuries to primary goalie Robin Lehner, assistant captain Reilly Smith, and top-four rearguard Brayden McNabb, who are on the injured reserve. Missing key pieces has impacted their level of play and they don’t have the flexibility to bring everyone back into the lineup without moving other key components.

The Golden Knights’ position in the standings also works against them.

Vegas is clinging to the final wildcard spot, three points up on the Dallas Stars, five points on the Vancouver Canucks, and six points on the Winnipeg Jets. The caveat is that all three teams have games in hand over the Knights. The Stars are closest to Vegas in the standings and have played four fewer games than the Knights. Dallas could lose all four games in overtime or a shootout and supplant Vegasas the final wild card team.

The betting market has confidence in the Stars making the postseason, currently listed as -200. Their inclusion would likely come at the expense of the Knights.

Lastly, Vegas’s undoing could be their schedule to close out the season.

Since its inception, the T-Mobile Arena has been a safe haven for the Knights. That’s been the case again this season, with Vegas going 18-13-3 in their friendly confines. However, only seven of their final 18 games come on home ice, which is a bad omen for a team that is 3-7-0 over their past 10 road games.

Too many things have to go right for the Knights to be listed at -150 to make the playoffs.

They will have to overcome major injury concerns, bad scheduling, and circumvent their cap situation to reach peak competitiveness to end the season. We’re comfortable backing them to miss the postseason at plus money and watch their stock tumble, as teams chasing them in the standings inevitably close the gap.

Golden Knights to Make the Playoffs – No +110