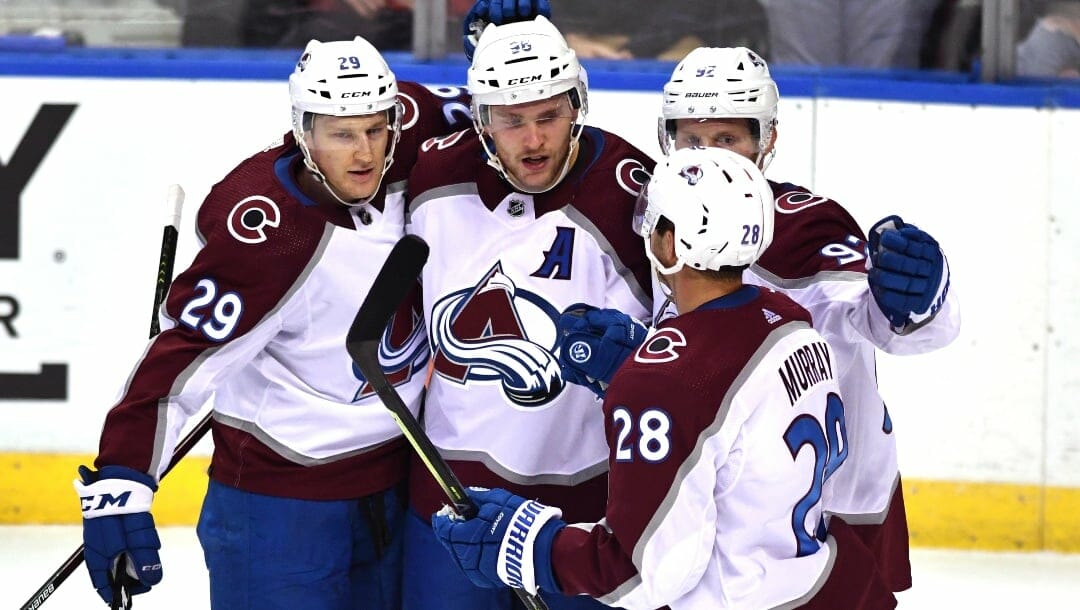 With the Avs pegged as such formidable favorites, does another team have a chance of preventing them from defending their Central Division crown?

Despite losing No. 1 netminder Darcy Kuemper and Nazem Kadri, NHL odds have the Avs as overwhelming favorites (-164) to repeat as Central Division champs.

No other division has a team favored as heavily as Jared Bednar’s.

The Wild are clear-cut second favorites (+400), while the Predators, Blues, and Stars have an outside chance of winning the division.

Who Will Win the NHL Central Division?

Based on current odds, the Colorado Avalanche have the best chance to win the NHL Central Division in 2022 (-154).

Even without the two Ks (Kuemper and Kadri), the Avs have too much talent and depth to be unseated as division champs. While Kuemper was solid between the pipes last season, his absence doesn’t cause irreparable damage. Far from it.

Alexandar Georgiev, acquired from the Rangers, has the slight edge over Pavel Francouz as the pair compete for the starting role.

Neither goaltender has been an NHL starter, which might leave Georgiev with a shorter leash than most starters. Expect a somewhat equitable share of the minutes between two largely unproven goaltenders.

The goaltending uncertainties put more pressure on the Avs’ core, which won’t be an issue considering their elite level and performance under intense pressure in the 2021-22 playoffs.

Gabriel Landeskog is nursing a low-injury body and won’t be ready in time for their season opener, while Nathan MacKinnon just signed a contract, making him the league’s highest-paid player. Aside from Connor McDavid, the second-highest paid player, MacKinnon is as dominant as any forward in the league.

Colorado’s 2021-22 Norris and Conn Smythe winner, Cale Makar, is a generational talent who is significantly superior to any other NHL blueliner. He is the odds-on favorite to repeat as the Norris winner and will only improve as time elapses.

Landeskog shouldn’t be out long enough to hamper their division title expectations.

Most of the Wild’s 2021-22 success can be attributed to their dynamic and prolific offense. The Wild scored the fifth-most goals per game (3.72) and won 23 games by three or more goals. Only four teams won more lopsided games.

While proficient at throttling teams, the Wild, with the fourth-best winning percentage in one-goal games (67%), were also outstanding in tightly contested affairs.

However, the Wild traded second-leading scorer Kevin Fiala to the Kings in the offseason, which will almost assuredly negatively impact their offensive production.

Minnesota also had a permanent goaltending alteration afoot. Cam Talbot made a move when the Wild put their faith in Marc-Andre Fleury in advance of the 2021-22 playoffs, deciding to try his luck in Ottawa.

The pressure is now squarely on Fleurty to recapture his Stanley Cup-winning form. The crease is his, and Minnesota will need the seasoned veteran to roll back the years and show he still has what it takes to be a top-tier goaltender.

While it’s a big ask for the 37-year-old, he’s only a year and a half removed of backstopping the Golden Knights to the Western Conference final. So there’s a solid chance Fleury has one more golden year left in those aging legs.

The Predators maintained the status quo for the coming season except for two veteran additions. They added proven pedigree in Nino Niederreiter and Ryan McDonagh.

The former will almost certainly add 20 goals to last season’s joint-12th most productive offense, while McDonagh is a two-time Stanley Cup winner who should provide leadership and increased stability on the blueline.

However, Nashville can’t expect a significant offensive contribution from McDonagh, whose production has dried up in recent seasons.

Roman Josi, one of the world’s best defensemen, anchors the Preds’ blueline. The 2019-20 Norris Trophy winner notched an outrageous 96 points last season and is once again considered a favorite to win the individual honor.

Nashville is also looking pretty in goal. The Predators were manhandled in the first round of last season’s playoffs for two reasons: they ran into a runaway Avs’ locomotive, and Juuse Sarros was unavailable because of a late-season injury.

Sarros was a 2021-22 Vezina finalist and should be as good, if not better, in the coming campaign.

However, depth and an aging squad are Nashville’s two most pressing concerns. Four of their top six forwards are at least 30, and the same ratio of defensemen is 32 or older.

The Blues added depth during the offseason but lost two influential players to free agency. Ville Husso, who left for Detroit, enjoyed a breakthrough year after replacing an inconsistent Jordan Biddington.

Biddington will need to start the season like he finished the last. He replaced Husso in the second round against Colorado and looked like he would steal the series before suffering a series-ending injury.

Biddington is once again the key focal point in St. Louis. The Blues have every chance of finishing second in the division if he locates his Stanley Cup-winning form.

Despite the loss of Perron, the Blues have one of the most evenly balanced offenses.

However, losing the joint-third top goalscorer, who was an asset on the power-play, along with their palpable defensive frailties, will prevent the Blues from challenging atop the division.

The Dallas Stars won 28 games by a single goal, the most in the league, and they came within a goal of ousting the Flames in the playoffs.

The Stars will rely heavily on breakout netminder Jake Oettinger to emulate his first-round play against Calgary. If he doesn’t, Dallas are in over their heads.

Joe Pavelski led the team with 81 points and was the one shining example of a player who doesn’t deteriorate over time.

After being touted as a division contender, the Jets endured a disappointing 2021-22 campaign. Paul Maurice resigned as head coach, and Blake Wheeler was recently stripped of his captaincy by current head coach Rick Bowness.

Kyle Conner led the team with 93 points and was a pleasant surprise, while Wheeler scored 60 points in 65 games. The former captain still managed almost a point per game but struggled to elicit the best from his teammates.

Mark Scheifele was conspicuously disgruntled with how the club was being run, frustrated with recent regression. He has since come around, but it begs the question of whether all is well behind the scenes.

Meanwhile, former Vezina winner Connor Hellebuyck faced the most rubber of any netminder and will need more support if the Jets are to have a bounce-back season.

Under Bowness’ guidance, the Jets will be more difficult to beat. Whether that translates to a better all-around season is by no means assured.

The Arizona Coyotes have been woeful since 2012, missing the playoffs in nine of the last 10 years. That won’t change in 2022-23, as the Coyotes should be one of, if not the worst, team in the league.

There is some good news for the Desert Dogs, as they have six picks in the first two rounds of the next two drafts. So things should improve. However, that improvement might occur at a glacial pace.

Chicago dumped a whole bunch of assets with the future in mind. They have a concrete plan, focusing solely on the future. With trade rumors swirling around the windy city, Patrick Kane’s future is uncertain

He and Jonathan Toews are in the final year of their big-money, long-term deals, while Alex DeBrincat, last season’s second-leading scorer, signed with the upstart Ottawa Senators

While the Blackhawks probably won’t be the NHL’s bottom feeders, they’ll undoubtedly be in the mix for landing the first-overall draft pick in the 2022-23 NHL entry draft.