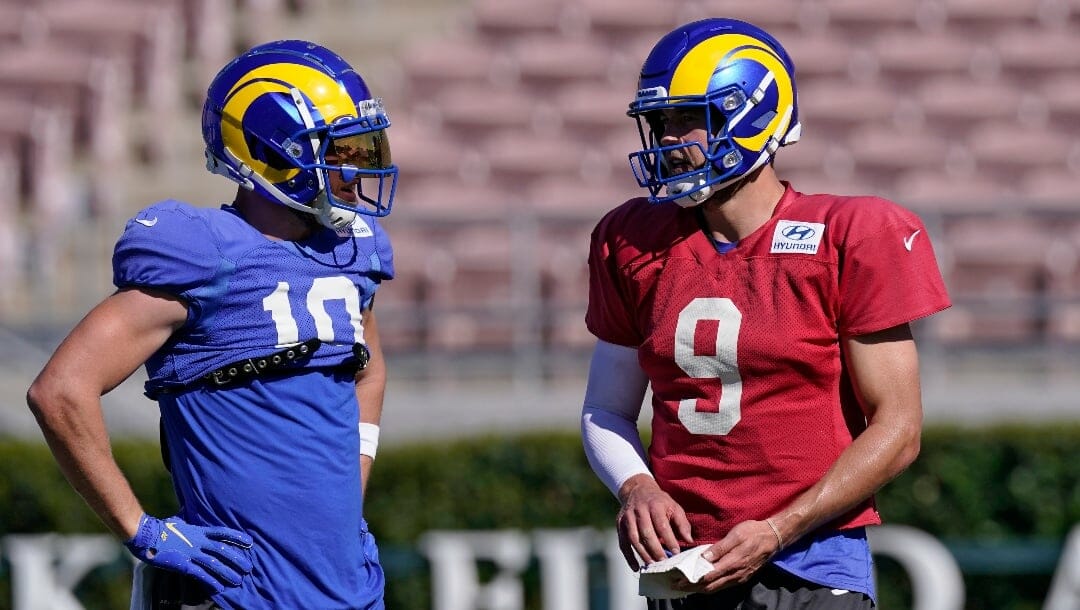 One year after the NFL salary cap decreased for the first time since the cap was implemented in 1994 – $198.2 million in 2020 to $182.5 million in 2021 – it increased by approximately 14% for 2022 ($208.2). The increase set the stage for several blockbuster moves that have included hundreds of millions of dollars and shifted Super Bowl odds at the online sportsbook.

As of late June, no player is set to sniff Dak Prescott’s record $75-million total cash number from 2021, but, for the first time in league history, five players will earn at least $40 million in total cash.

By total cash, here are the highest-paid NFL players for 2022:

Matthew Stafford signed the largest rookie contract in NFL history after he was selected with the No. 1 overall pick in the 2009 NFL Draft. And while Sam Bradford topped Stafford just one year later – the final year before the NFL’s rookie wage scale was implemented – Stafford’s six-year, $72-million still ranks as the second-largest rookie deal in NFL history.

In the first year of a five-year, $230-million deal signed shortly after being dealt to the Browns, Deshaun Watson has a miniscule base salary ($1.035 million) but a total cash number of $46 million thanks to a signing bonus – paid in 2022 but spread out over the next five years of the salary cap – of nearly $45 million.

Aaron Rodgers’ base salary ($1.15 million) is tied for the 11th-highest on the Packers, but a fat roster bonus of $40.8 million, which was due to be paid in full on Dec. 31 but was instead split into two payments of $20.8 million and $20 million. The first payment was made on June 20, and the second is scheduled for September 30.

Kirk Cousins enters his eighth season as a full-time NFL starting quarterback with one career playoff win and nearly $162 million in career earnings. His total cash number for 2022 ($40 million) is more than double that of Danielle Hunter ($19.7 million), who owns the next-highest total of any Vikings’ player.

Instead of retiring, Aaron Donald became the highest-paid non-quarterback in NFL history. His three-year, $95-million deal includes a signing bonus of $13 million and roster bonus of $5 million this season, the ninth for the eight-time Pro Bowler and three-time NFL Defensive Player of the Year.

Jaire Alexander made $2.1 million last season, his fourth with the Packers after his first-round selection in the 2018 NFL Draft. He’ll make more than $31 million this season after signing a four-year, $84-million contract that included $30 million guaranteed.

Cooper Kupp’s sensational 2021 season earned him the biggest contract guarantee ($75 million) for a wide receiver and non-quarterback offensive player in NFL history. His total cash number in 2022 ($30 million) is bigger than his five-year career earnings and 4700% more than his earnings in 2018 ($640,000).

Tom Brady’s retirement dance didn’t change his contract, a two-year, $50-million signed in 2021 that essentially reset the original two-year, $50-million deal signed prior to his arrival in Tampa a year earlier. Nearly all of his 2022 total cash will come from a signing bonus of $28.88 million.

Patrick Mahomes’ sixth NFL season is the first of a 10-year, $450-million contract signed prior to his fourth NFL season. He has a roster bonus of at least $22.9 million in each of the next nine seasons, including $27.4 million in 2022.

In the third year of a four-year, $118-million contract signed in March 2020, Ryan Tannehill has a base salary of $29 million that accounts for his entire total cash number. His cap hit of $38.6 million is the highest in the league.

Carson Wentz is now playing for a third team under the same contract signed with the Philadelphia Eagles before the 2019 season. His four-year, $128-million deal followed him to Indianapolis and Washington, where his total cash number of $28.2 million is nearly $18 million more than that of the next-highest player, William Jackson.

The Chargers retained Mike Williams in March 2022 with a three-year, $60-million contract that includes $40 million guaranteed, all of which is due in the first two years of the deal. His cash number plummets to $12 million in 2023 before jumping to $20 million in 2024.

An undrafted free agent who made $490,000 in his rookie season – and just $1.6 million over his first two years – J.C. Jackson cashed in with a five-year, $82.5-million contract in free agency after 2021, his fourth and final season with the Patriots.

In his first season with Miami, Tyreek Hill has a base salary barely over $1 million and a cap hit of approximately $6.5 million. But in 2023 and beyond, the former fifth-round pick has big numbers across the board, including a base salary of $43.9 million in 2026 if an opt-out isn’t exercised.

Jimmy Garoppolo is in the final year of the five-year, $137.5-million contract he signed after the 2017 season, his first with the 49ers after arriving via trade in October 2017. His total cash number of $24.55 million is more than the combined cash totals for George Kittle, Nick Bosa, and Deebo Samuel.

More than 65% of Travon Walker’s total cash with his four-year rookie deal will come in his first season. His signing bonus of $24.4 million is spread evenly through his first four seasons, $6.1 million per season.

The Atlanta Falcons ate $50.53 million in dead money, the biggest dead salary cap hit in NFL history, by trading Matt Ryan to the Colts. He’s still playing with a five-year, $150-million deal signed with the Falcons in May 2018.

Stefon Diggs’ contract extension signed in April 2022 added four years and $96 million to the remaining two years and $25 million on his previous deal. He’s the only Bills’ receiver with a total cash number ($24.58 million) greater than $3 million for 2022.

Marshon Lattimore’s five-year contract extension – signed in September 2021 – runs from 2022-25 and includes an average annual salary of nearly $20 million. He’s one of 10 players on the Saints with a total cash number greater than $10 million, a group that includes core special-teamer Taysom Hill.

As of late June, Russell Wilson hasn’t received a new deal from his new team and is set to play the penultimate year of his four-year, $190-million deal signed with the Seahawks. He’s one of only four Broncos’ offensive players with a total cash number greater than $4 million in 2022.

After earning barely $9 million over the first four seasons of his career, T.J. Watt cashed in last season ($36 million) and will continue to cash in over the remainder of his four-year, $112-million contract that pays him at least $20 million annually through 2025.

Another year, another fat rookie deal for a top-10 draft pick in Detroit. Aidan Hutchinson’s four-year (with the typical fifth-year option for all first-rounders) includes $35.7 million guaranteed.

The NFL’s best receiver has modest contract numbers across the board for his first season in Las Vegas. Davante Adams’ total cash number doesn’t exceed $27 million until the fourth year of the five-year, $140-million deal. Entering this year, he’s only once earned more than $13 million in a season – $18.9 million in 2017.

Derek Stingley Jr. has the typical contract of a highly drafted player with a fat wad of cash upfront ($23.1 million in total cash for 2022), followed by low base salaries and cash totals over the next three seasons. More than 50 players on the Texans’ roster, as of late June, have a higher base salary than Stingley ($705,000) for 2022.

More than a year after his fifth-year option was exercised by the Baltimore Ravens, Lamar Jackson has yet to sign a new deal. The entirety of his $23-million total cash number is base salary, which all counts against the Ravens’ cap.

Christian Kirk’s four-year, $72-million contract included $37 million guaranteed and a big cap hit in 2023 ($21.5 million), but the Jaguars could opt out after two years with modest dead money ($10 million) and spread $49.5 million in cash over the final three years of the deal.

In three years, Ahmad “Sauce” Gardner went from a three-star receiver recruit with four Power Five offers to a $33-million NFL cornerback. About 66% of his money is coming in 2022, thanks to a $21.5-million signing bonus.

Just under half of Minkah Fitzpatrick’s new four-year, $73.6-million contract is guaranteed, about $22 million of which comes in 2022. The highest-paid safety in league history won’t earn more than $18 million in any of the next four years.

Joey Bosa has the ninth-largest cap hit in the NFL for 2022 ($28.25 million) but is buried in total cash. He received $43 million in cash in 2020, the first year of a five-year, $135-million contract that included $102 million in total guarantees and $78 million in guarantees at signing, both of which were the most in NFL history for a non-quarterback.

The highest-paid interior linemen in the NFL, Frank Ragnow will make $20.7 million in 2022 after making only $17 million over his first four seasons combined. Despite the big jump – thanks to a four-year, $54-million deal signed in May 2021 – his base salary ($2.7 million) and cap hit ($7.5 million) remain modest.

Kayvon Thibodeaux didn’t slide in the 2022 draft and therefore received $31.4 million from the New York Giants. His fully guaranteed deal includes a $19.97 million signing bonus that was paid in full but is spread out over the Giants’ cap from 2022-25.

Chris Godwin stayed in Tampa with a three-year, $60-million deal that included an $18.75-million signing bonus – spread over the Bucs’ cap for the next five years – and $40 million in guarantees. He’ll earn $20 million in cash each year from 2022-24.

Dak Prescott earned a total of approximately $5 million over his first four seasons with Dallas. He earned more than $100 million over the last two seasons and will get another $20 million in 2022.

At BetMGM, NFL betting doesn’t stop at kickoff. With live betting, you can bet on NFL odds throughout the game.

Available from the preseason through the Super Bowl, live betting allows bettors to place wagers on live odds. As you’re watching Patrick Mahomes and the Kansas City Chiefs on TV, Jonathan Taylor and the Indianapolis Colts from your phone, or Nick Chubb and the Cleveland Browns from the stands at FirstEnergy Stadium, you can place live bets.