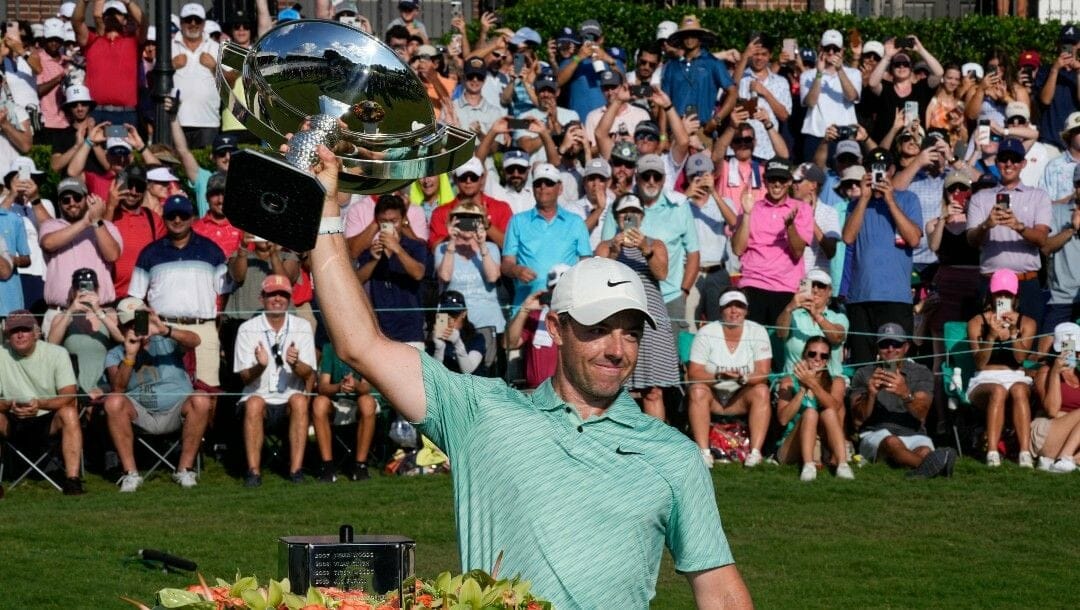 This made for some tough calls for golf betting each week. But at the same time, it made for some exciting weekends with several tournaments coming down to the back nine on Sunday.

In an exciting final round, Rory McIlroy fired a 62 to win by two shots over Tony Finau and four shots over Justin Thomas. All three players made up the final group on Sunday.

McIlroy successfully defended his title from 2019, which was the last year the tournament was contested due to COVID.

Billy Horschel won by three strokes over Aaron Wise. Horschel finished at 13-under after entering the final round with a five-shot lead.

It was Horschel’s first win of the season.

Burns came from seven shots back in the final round to tie Scottie Scheffler and force a playoff. On the first playoff hole, Burns made a long birdie putt to secure his third PGA Tour win of the season.

Thomas came from seven shots back entering the final round to win his second career major and second career PGA Championship. He defeated Will Zalatoris in a three-hole aggregate playoff as both players finished the tournament at 5-under.

Mito Pereira led going into Sunday and even had a one-shot advantage playing the 18th hole, but he hit his drive into the water and made a double bogey to finish in a tie for third.

Lee successfully defended his title at TPC Craig Ranch with a one-stroke win over Jordan Spieth. Lee finished the week at 26-under par, so it was another birdie-filled event with plenty of low scoring.

With Quail Hollow hosting the Presidents Cup later this year, the event shifted to TPC Potomac at Avenel Farm. The week featured rainy and cool conditions for three of the four days, which kept scoring down. Max Homa ended up by winning the event with a score of 8-under par.

For Homa, it was his second PGA Tour win of the season and fourth top 10 in just 15 starts.

Rahm was a heavy pre-tournament favorite and the 27-year-old led the event from start to finish en route to his seventh career win on the PGA Tour. He finished at 17-under, which was one shot better than three other players.

His opening round 64 was the key to victory, but he played solid golf the other three days, firing rounds of 66, 68 and 69.

The Cantlay-Schauffele team came away with a two-shot victory in the team event in New Orleans. It is the only team event on the PGA Tour schedule every year. The first and third rounds are best-ball, while the second and final rounds are alternate shot.

They shot even par on Sunday to finish at 29-under for the tournament, which made things a little interesting considering they entered the final round with a five-shot lead.

The 28-year-old earned his 13th career PGA Tour victory by taking down Patrick Cantlay on the first playoff hole at Harbour Town Golf Links. Spieth finished the week 13-under par. Although he struggled with his putter all week, his ball-striking was among the best of his entire career.

Spieth fired a final round 66 to get himself into the playoff.

Scheffler dominated the field at Augusta National finishing at 10-under par to win by three shots over Rory McIlroy. It was an impressive performance, which continued his terrific run of late. He’s now won four of the last six tournaments he has entered.

The talk of the week was Tiger Woods who returned to action following a horrific car accident and serious leg injury just over a year ago. Woods made the cut and finished in 47th place, earning him $43,500.

At 31 years old, Spaun picked up his first career PGA Tour win, earning the final spot in the Masters in the process.

He fired back-to-back rounds of 69 over the weekend to finish at 13-under par, two shots ahead of Matt Kuchar and Matt Jones.

What a week it was for Scheffler, who by winning the tournament became the world’s No. 1 ranked player. The 25-year-old defeated Kevin Kisner in the championship match Sunday afternoon. Since he went to the University of Texas, Scheffler had a ton of fan support all week.

Scheffler went 2-1 in group play and then on the way to winning the championship he defeated defending champion Billy Horschel, Seamus Power, Dustin Johnson, and then Kisner.

Burns won the tournament for a second straight time by defeating Davis Riley on the second playoff hole. This was Burns’ third career PGA Tour win and all three have come within the last calendar year.

The 25-year-old finished the tournament at 17-under, earning him a winner’s share payout of $1.4 million.

The tournament will be most remembered for close to five inches of rain, which caused delays Thursday, Friday, and Saturday. The first round was not completed until Saturday afternoon, which then caused the second round to go until early Sunday afternoon.

The third round was played Sunday and Monday morning followed by the final round Monday afternoon.

Ultimately, Smith came away with a one-shot win thanks to a final round 66 and a nice winner’s share payout of $3.6 million.

Scheffler made some clutch pars down the stretch to win his second tournament in three starts, and earn a nice $2.2 million in prize money for the week.

The tournament will be remembered for the difficult conditions on Sunday, which led to a scoring average of 75.481. Scheffler managed an even-par 72 and a one-shot win over three players.

The former University of Georgia golfer shot a 4-under 66 at PGA National in the final round to win by one stroke. It was his first PGA Tour win, and he became the first Austrian to win on the Tour. Straka began the day five shots behind Daniel Berger, who had a Sunday to forget, and earned a winner’s share of $1.4 million.

Niemann led the tournament from start to finish in what was a really impressive week for the 23-year-old. It was the first time in the tournament’s history that the winner went wire-to-wire. Niemann beat PGA Tour rookie Cameron Young by two shots.

Although the tournament will be most remembered for Sam Ryder’s hole-in-one at the raucous 16th hole on Saturday, Scheffler defeated Patrick Cantlay in a three-hole playoff to pick up his first career PGA Tour win.

He recorded three straight birdies on the back nine to help get him into the playoff and eventually land the winner’s share of $1.5 million.

SAM RYDER ACES THE 16TH AND IT IS ABSOLUTE SCENES (🎥 @PGATOUR) pic.twitter.com/3hicPdPS4N

The 32-year-old picked up his first career win with a solid 4-under 68 in the final round to outlast several players, including Jordan Spieth. Hoge had finished runner-up just a few weeks prior at The American Express.

List beat Will Zalatoris in a one-hole playoff to earn his first career PGA Tour win. The 37-year-old carded a final-round 6-under 66 to get into the playoff. In his 207th career start on the PGA Tour, List earned a winner’s share of $1.5 million.

Swafford started the final round three shots off the lead but fired an impressive 8-under 64 to win the tournament by two strokes. It was the third career PGA Tour victory for the 34-year-old.

The defending Masters champion came from five shots back on the back nine to force a playoff against Russell Henley. The playoff was over quickly, as Matsuyama eagled the par-5 18th hole following a brilliant second shot that ended up three feet from the hole.

Matsuyama won $1.4 million with the victory.

All the winners from the previous season made up the field, and it was Smith coming away with the first win on the 2022 calendar year. The scores were extremely low, as Smith’s winning score came in at 34-under, one shot better than Jon Rahm.

Golf betting is the perfect way to take your golf entertainment to the next level.

Whether you’re a first-time bettor browsing Masters odds, a casual golf fan checking out prop bets for Tiger Woods, or a longtime diehard breaking down wind trends for links courses, there are PGA odds this week for everyone.